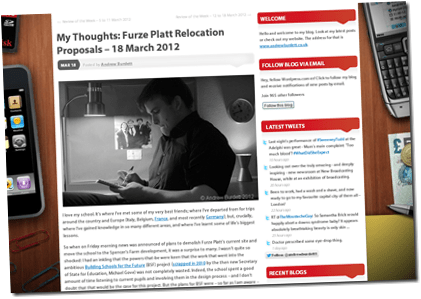 I thought it would be appropriate – given how many people read my post with my immediate thoughts about the plans – to just put up this short article about Tuesday night’s blocking of the Spencer’s Farm development. Peter Prior, the multi-millionaire businessman behind the plans, told the Advertiser that the scheme for the new school could also ‘no longer go ahead’ after Borough councillors pledged to protect Green Belt boundaries. Yesterday, in an email to parents, headteacher Ms White confirmed: "the decision has been taken by the partners involved not to promote the Furze Platt Senior School (FPSS) redevelopment proposal any further".

Sounding himself like a tyrant losing his power and his own way, Prior reportedly compared the Borough to Fascist Italy’s leader Mussolini and complained that the minority had influenced the majority. I think there, though, he’s wrong: thousands of local residents had raised complaints about the scheme, with a petition containing the signatures of 2,342 directly opposed to the plans handed  to the Council by the Maidenhead North Action Group at the end of last month. On their part, it’s great to see that the Borough have listened to their voices.

What that means is that the school and the 320 homes at Spencers Farm, along with the 380 new homes on the existing FPSS site, will not be built.

In a way, I’m quite disappointed for those who’d backed the school scheme: it’s thought there’s been involvement on the school’s part for a couple of years, meaning the axing has effectively completely wasted that work. Only a couple of weeks ago, the Chair of the Governors asked me personally to reconsider my stance – which I insisted was not wholly opposed to the scheme, rather one that was filled with doubt over whether the development would actually work – because of her and the Senior Leadership Team’s desire to convince students of the benefits of a new school.

But at least Peter Prior himself can’t be too disappointed: he now won’t need to find the £40 million estimated cost, which was to be "the big challenge". And his company won’t risk losing the £30 million he claimed, in a worst-case scenario, they could.

"I think there is a risk from my company’s point of view, from the shareholders’ point of view, that the market collapses and that in the end we lose money. I mean we may make a profit, I don’t know, but when you take risks like this you have to be rewarded."

— Peter Prior, speaking to the Maidenhead Advertiser,12 July 2012

Actually, it’s evident that ‘Peter the Philanthropist’ is really very disappointed. The coming of Crossrail to the town is hardly going to bring house prices down, and the houses he planned to build would have been completed around the same time as the rail project’s opening – virtually guaranteed big bucks for him. Many saw the inclusion of a new school as a ‘sweetener’ to his real want for building the hundreds of homes, and some claimed that his goodwill around the town in recent years was all to strengthen his image and relationship with Maidenhead’s movers and shakers. Coincidentally, after the decision on Tuesday, he has announced his intention to resign from his Chairman role of the Maidenhead Waterways Restoration Group, of which he was a founding sponsor.

The news may be seen as disappointing for the next generation of Furze Platt Senior School students. But for future generations of Maidonians, the retention of the rich countryside with which we are blessed with is a real win. That has a very real, if immeasurable, ability to improve children’s overall wellbeing. They may not have floor-to-ceiling windows at their school but they’ll still have great staff. As a Summerleaze webpage said, in response to the question ‘What will Furze Platt do if the submission is not accepted by the Local Authority?’, ‘It is the culture within the school’s four walls that is important’.

So as the ‘Even Better If…’ proposals, at least in their current form, are put to rest, Ms White’s email reiterated the "commitment of the Leadership Team and the Governors to the school and its development on its current site", stating "We will not waver in our determination to do everything we can to provide our young people with an excellent educational experience. In addition, we will continue to bid for funding to keep making our school ‘Even Better’."

On the other side of these summer holidays, I’m hoping to return to Furze Platt for Sixth Form. Actually, I haven’t applied anywhere else because, in my mind, Furze Platt’s the greatest place to be. There’s such a brilliant atmosphere there, with caring staff, stimulated pupils, and excellent results. Why would I want to go anywhere else?