In precisely 24 hours, the Olympic Opening Ceremony is due to get under way, as the world’s eyes (an expected 4.8 billion people will watch) turn to London to see our capital city stage these 2012 Games.

For so many involved with the Games so far, it will in fact very much mark the end of their ‘Olympic journey’: the architects have long-since closed the files on the brilliant designs for the stadia, most of the builders have hung up their high-vis jackets and safety hats, while the final temporary signs are being tie-wrapped to lamp-posts and fences.

Now, E20 (the fictional EastEnders postcode officially issued to the Olympic Park by Royal Mail), along with all of the other venues, is ready. It’s now up to the athletes to do their very best. Team GB are already smiling: Andy Murray, of course, performed brilliantly on the lawns of Wimbledon just a few weeks ago, and last Sunday a Briton won the gruelling Tour de France competition.

Tom Daley, who was the subject of a truly excellent documentary that went out on Monday night, was eleven years old when Jacques Rogge announced the word ‘London’ (to the great delight of the thousands that had gathered in front of a big screen in Trafalgar Square) on 6 July 2005. Daley is now a man. Olympic organiser Seb Coe is now also seven years older and, unlike Tom, seven years greyer. But, despite all the headline-making “cock-ups” (not least last night’s Korean flag mix-up) and extreme costs of the Olympics, Seb and his team have done a great job. 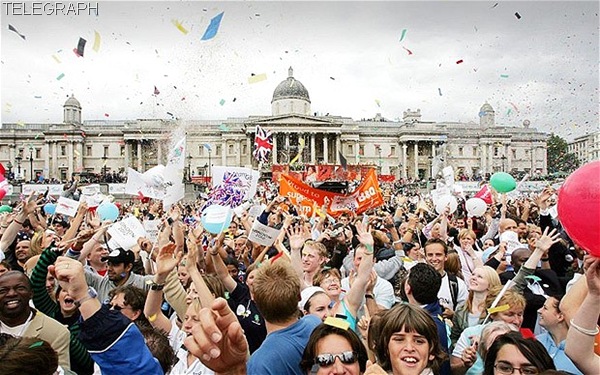 The 2005 Mayor of London‘s archrival is now in power; we’ve a completely different government in Westminster; and, since the day after that uplifting announcement, sadly we have a very different history of terrorism in London.

To think that, when the IOC voted in Singapore to give us 2012’s Games, Facebook hadn’t even celebrated its second birthday, let alone crossed the pond.

To be fair, its rise was rapid, but even since China’s 2008 games, social media – and, more specifically, the way we use social media – has changed hugely. At the last summer Olympics, there were only 100 million Facebook users and a mere 6 million Twitter users. Today those numbers are estimated in excess of 900 million and 600 million respectively. So great is Twitter’s power now that hashtags (themselves only officially recognised since June 2009) are seen seemingly everywhere, from TV programmes to billboards, and even on flags draped over athletes upon winning a race.

Some bright spark made a gamble that paid off brilliantly. Flashing up ‘#SaveTheSurprise‘ on video screens to the 60,000 invited audience members at the Olympic Stadium for Monday’s technical practice encouraged those lucky ones to generate hype about Danny Boyle’s masterpiece while avoiding the release of spoilers. Only a few broke ranks, but their selfish voices were drowned out by a sea of countless tweets expressing awe at the film director’s show.

“This is the most amazing thing I have EVER seen. #London2012 #openingceremony #SaveTheSurprise”

“Nearly at the end and all I can say is relax Britain, Danny Boyle has done us proud. Never seen anything like it! #savethesurprise #fb” 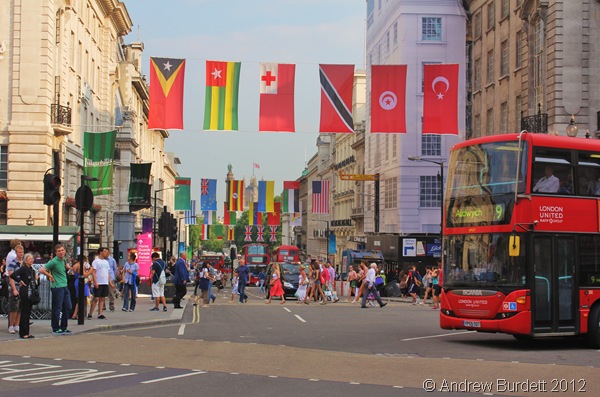 Yesterday, in the city, there was a real, genuine buzz in the air. Maybe it was the wealth of foreign tongues, or the flags of every participating country draped over some of the busiest roads. Perhaps it was just the sun, attracting children to the Diana Memorial Fountain in Hyde Park (just opposite the spectator seating area for the swimming third of the Triathlon, which will take place in the Serpentine), or colleagues to the fresh air outside every pub in the West End, enjoying refreshing post-work drinks in the heat of the street. 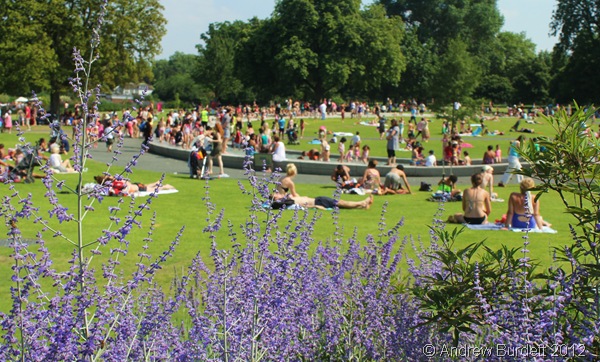 I’ve got a sneaky feeling, though, that the Olympics may have something to do with that ‘buzz’. Everyone who’s come to our Isles of Wonder (also the name for tomorrow night’s show) to enjoy the Games is in for a great fortnight of the best athletes competing in some of the world’s best-designed arenas set to backdrops of both London’s organised chaos and England’s green and pleasant land.

Though the first events were yesterday (Wednesday), there’s now just one day to go until the Games officially begin. I can’t wait to be sat in Kidwells Park, a designated ‘Community Live Site’, to watch the Opening Ceremony with surely hundreds of others. There’s so much speculation about what to expect, with the question over who will carry the Torch into the Stadium at the end of its 8,000 mile tour of the UK gripping the country. The truth is that we don’t know, and probably (and hopefully) won’t until the time comes.

“It is seven years, of course, since London was awarded the Games of the Thirtieth Olympiad. Billions have been spent on the preparations, and there have of course been problems, perhaps inevitably, initially around ticketing and then, of course, the issues that we all know so much about regarding security. But perhaps those discussions are now to be resumed until a few weeks’ time, because right here right now we are just 24 hours away from the Opening Ceremony.”

There’s no doubt about it, though: whatever’s planned, it will be the greatest show that Planet Earth has ever seen.