As everyone knows, 2012’s London Olympics begin next week with the Opening Ceremony on Friday (27 July), though the games themselves get underway this Wednesday with Women’s Football.

However, what slightly fewer people are aware of is the ‘Cultural Olympiad’ that accompanies London 2012: an arts festival, which offers what some may call an ‘alternative’ to all the sport. It is, as its website proudly states, ‘the largest cultural celebration in the history of the modern Olympic and Paralympic movements’, apparently involving 16 million people from across the UK either taking part in or attending performances around the nation. 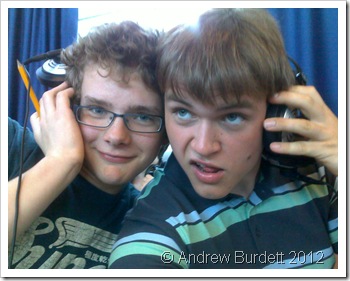 One of the big-budget projects run as part of the Olympiad is called The Tree of Light, a music work composed by Orlando Gough. The choir in which I sing, the Taplow Youth Choir, were asked to get involved some time ago, and in June we made a recording of the entire score. The recording session didn’t go entirely according to plan, though, with the computer (rather embarrassingly) crashing nearly every time we completed a take, forcing us to try and try again. Then there were issues with the headphones (or ‘cans’ as they’re known) that we were wearing, with the volume of the synthesised backing instruments so deafeningly loud we were unable to hear our own voices. I was impressed, however, with the conductor’s (Jeremy Avis) efficiency in the stressful situations: as soon as he knew the technicians needed time to correct a fault or reboot the Mac, he’d instantly turn to a section that needed work and rehearse that with us. Consequently, very little time was actually wasted.

Sadly, due to a clash with the scheduled date for my Duke of Edinburgh’s Silver Award expedition, I would never get to sing the work live. That was until Gillian, our choir’s own conductor, sent an eleventh-hour email asking if any of the male voices would be available to join in with a performance in Oxford on 9 July. I cleared my diary for the day in order to take part, and headed to Maidenhead Railway Station, where a seven-seat taxi was awaiting the five of us lads. Off we went to  a pitifully muddy South Park, Oxford, for a day we’d never forget. 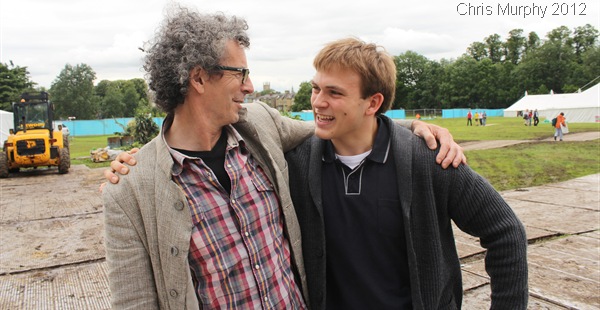 We’d been told we’d have a teatime break that would allow us to watch the Olympic Torch pass the site on Day 52 of its relay. What we didn’t know was that the event we were singing at was in fact the pinnacle of the Olympic Torch Relay Oxford celebration: that day’s ‘Welcome Party’ for the Torch as it stopped to ‘rest’ overnight. The whole thing was, as a result, much, much bigger than any of us had imagined. Set in 50 acres of open space, with a backdrop of the dreaming spires of Oxford itself, The Tree of Light was set to be the main attraction in an evening of entertainment that also included roving performers, musicians, storytellers, and clowns. There was also a tent occupied by the Oxford Playhouse, a sportszone, and tree-themed activities. 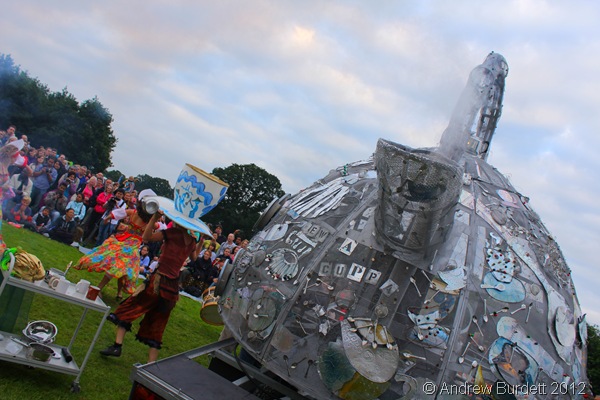 The recording our choir had made was being used throughout the day as a ‘backing tape’ for the hundreds of children rehearsing the dance (choreographed Charlie Morrissey) that would accompany the entire production. As I’d feared, the recording was played so loudly during the show that the few microphones placed sparingly around us singers turned out to be frankly pretty redundant – we could have failed to open our mouths for the whole of the ‘concert’, and there’d have been little implication on the show. 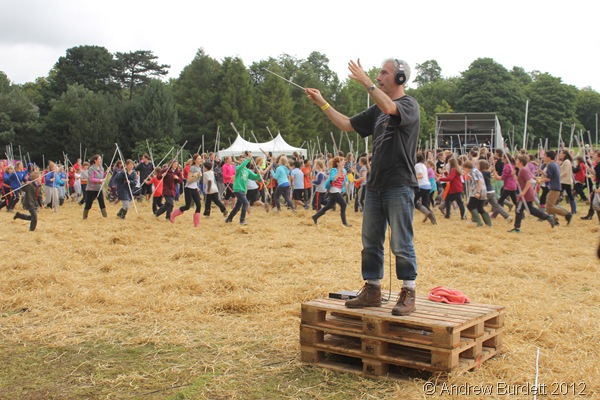 The centre-piece of the show was an enormous structure, designed by creative duo Block9, that was apparently meant to represent the title-character: the Tree. Looking at it from behind, it was easy to mistakenly believe it not to be finished. But the ugly scaffolding rear was very different to the impressive front: a jumble and mishmash of futuristic elements, tangled like a strangled and suffocating object of nature living in the super-industrial age of tomorrow. The first sections of the Tree arrived about ten days before the date of the performance, with sustainable energy designers Electric Pedals setting up their bicycle-powered lights the day before. 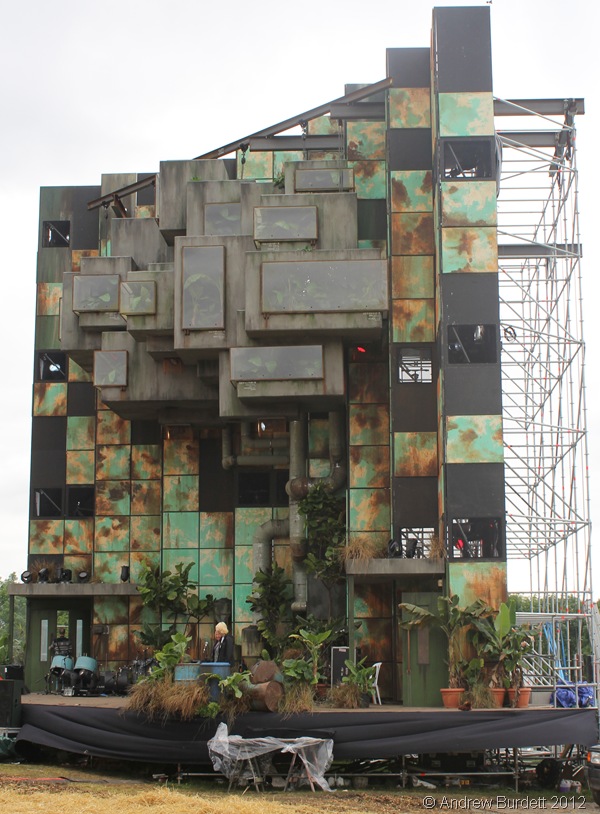 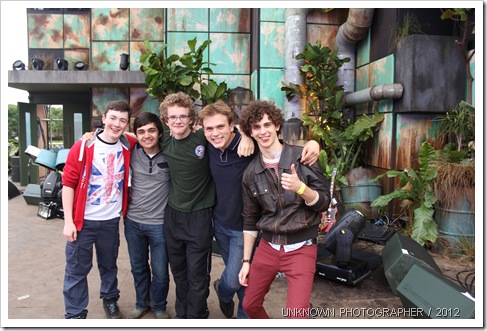 Among the lads who’d also responded to the request for Taplow singers was Chris Murphy, a great friend of mine and a fellow bass, and Jamie Reibl, a former TYC member who’s just graduated from the California Institute of the Arts. With the full run-through not for a few hours, we killed time by wandering around the site (which happened also to be simultaneously hosting a two-day Quidditch tournament), consuming gallons of nasty, cheap, instant coffee and talking to some of the key figures behind the production. We also went to find our Tyvek coveralls – boiler-suits that would supposedly add to the intended "post-holocaust" look. 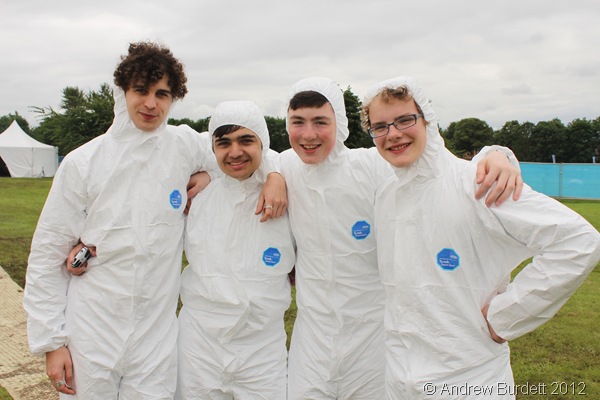 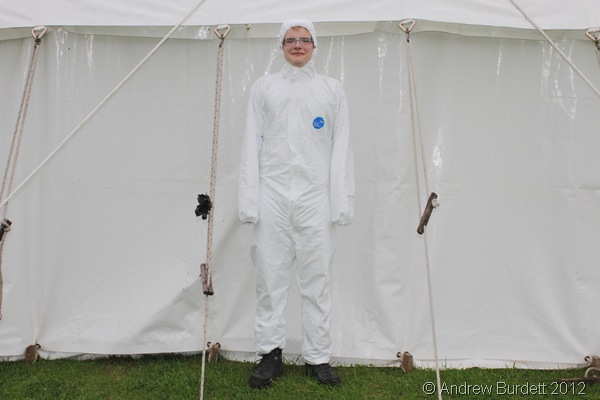 In between the collective rehearsal and show (scheduled to begin at sundown), I sneaked out of the tented village and went to watch the Olympic Torch on its last leg of Day 52 of the Relay. I managed to get back into the park just in time to see the Cauldron lit. 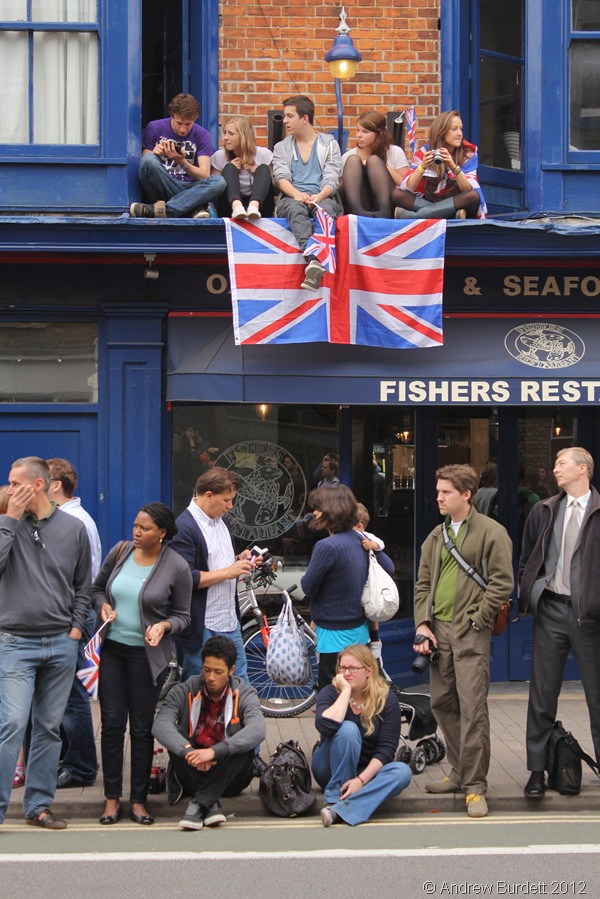 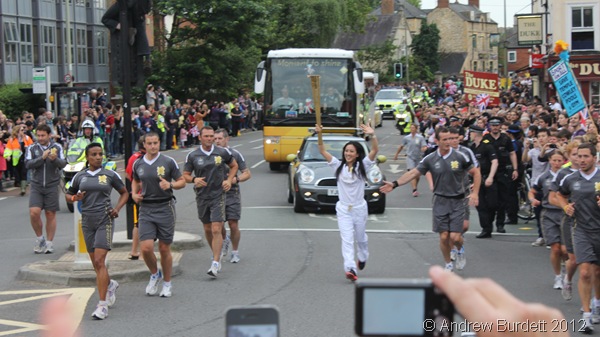 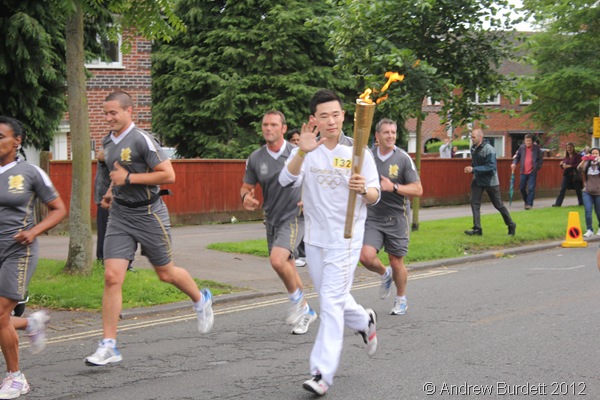 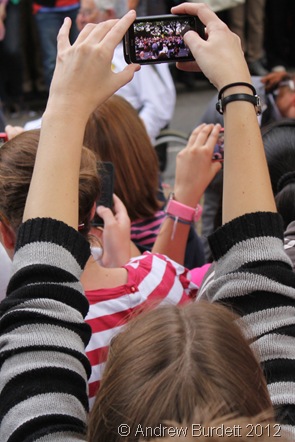 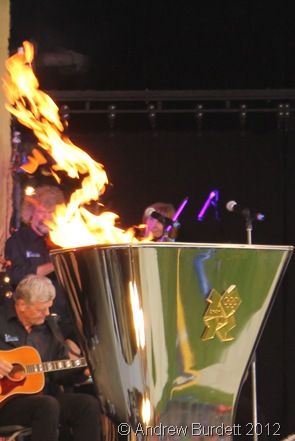 Perhaps the best moment of the entire day, though, was when I met Torchbearer Emma Cuthbertson backstage. She allowed me to hold the Torch she’d run with earlier in the day and Jamie was there to take a picture of me. The irony was that on the other side of the ‘VIP fence’, the primary sponsors – Samsung, Coca-Cola, and Lloyds TSB – all had great, long queues for photobooths in which members of the public could pose with genuine Torches too – only while being subjected to enormous amounts of advertising. 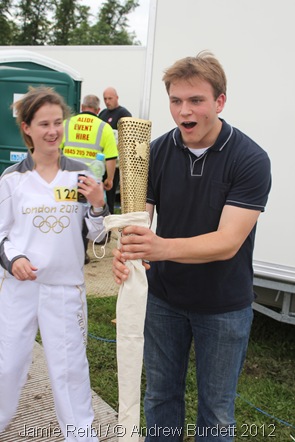 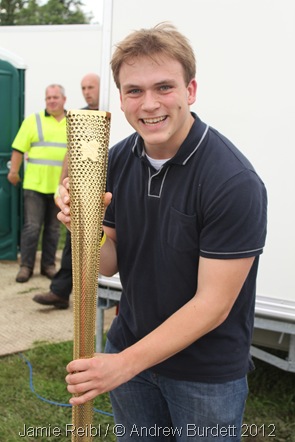 During the Oxford day, spare time was filled with exploring the area in which we were to perform. I compiled a kind of video-diary of the day, which, I’m sure, is tedious and boring to people who didn’t take part, but for me and others it’s a little memento of a tremendous day.

Tonight (21 July 2012) The Tree of Light was performed again, only on a much larger scale, involving the whole of the Taplow Youth Choir. As a result of the cancellation of my DofE expedition due to weather conditions in the destination for our canoe trip, I was also able to participate, and it was great to see a whole new batch of people familiarise themselves with the funny white costumes. 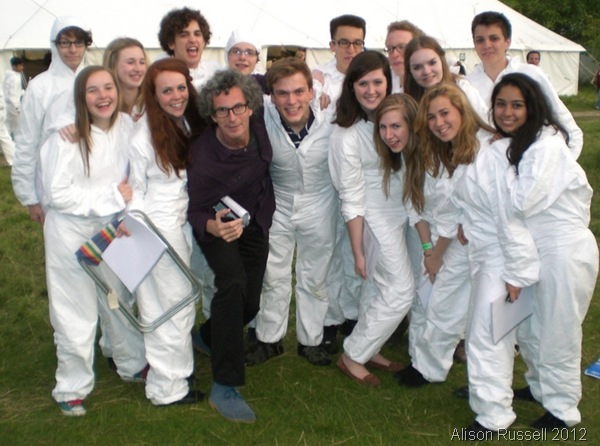 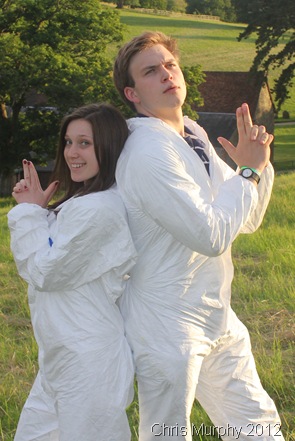 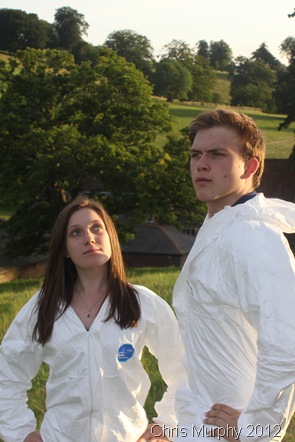 My parents and sister came to watch the show and all three were left quite baffled by the whole thing, with Harriet complaining that it was all a major "waste of money". If I’m honest, I’m still not quite sure I understand the lyrics: ‘When it’s springtime what we do, we sing, we sing up, and we’re in time. What we don’t, we won’t, when we can’t, when it’s downtime. When we can’t, we dance with our aunts, in the meantime." 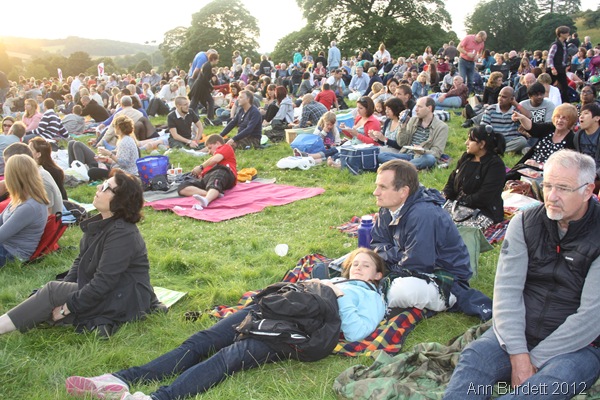 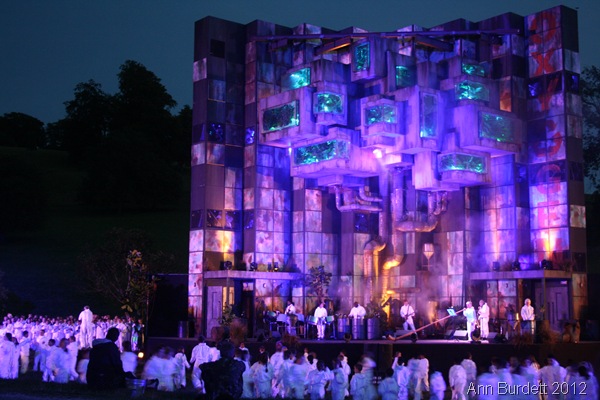 But it was so much fun being involved with something so silly and so unique, that I will strangely miss the bizarre music and even more bizarre words. That said, the melodies in Birds were beautiful and the lyrics in Wood were brilliant – and the whole score was very special. I know for sure that, for various reasons, I’ll remember these days for a long, long time – maybe there is evidence of the much-questioned ‘London 2012 legacy’ after all?