For weeks, I’ve been watching the Torchcam live stream and looking at daily pictures from each day’s leg of the journey, excitedly awaiting the arrival of the Olympic Torch Relay in my hometown of Maidenhead. I couldn’t believe my luck back in March when I found out the starting location for the convoy was in fact the end of my estate, Cranbrook Drive! I immediately began dreaming of following the Torch right the way through its Maidenhead journey, armed with my camera and riding my bicycle. My mother, keen for me not to be disappointed, warned that my grand scheme wouldn’t work – if I’m honest, I doubted I’d see much too – but unfazed by the dramatic video of the similarly pedal-powered youngster getting too close to the torchbearer and being tackled by the security officials in Suffolk, I rode up to Furze Platt Road and waited for the flame to arrive.

Whilst I was by no means the first to arrive outside Cranbrook, I was staggered by the continually increasing size of the crowd. Carloads of people were turning into the estate (forcing the sixty-odd people who’d blocked the entrance to part in biblical marine fashion), before parking up, getting out, and reserving their own bit of roadside.

Now well over half-way through its 8,000-mile journey, this was Day 53 of the procession which has already been to all four corners of the UK, from Derry to Aberdeen, Newcastle to Aberystwyth. I actually saw the flame in-the-flesh for the first time yesterday, whilst in Oxford preparing for the evening’s celebration event, as I wrote in my earlier blog this morning. As a result, I knew the Torch was just minutes away on seeing the three big sponsor vehicles – one in green livery and run by Lloyds TSB, a blue one branded with Samsung’s logo, and Coca-Cola’s red truck whose marketing efforts blew every other sponsor out of the water.

To the delight of the waiting Maidonians, the convoy assembled outside Pinkney’s Farm just before the 10:48am scheduled arrival time, allowing the first torchbearer to get off the bus and prepare for the (albeit short) run. Cheering loudly from the sidelines, hundreds of neatly-uniformed local schoolchildren who’d either been granted the morning off school, or had come in one of the buses parked nose-to-tail on one of the tracks on the farm. Of course, the Furze Platt Seniors (pupils of the school directly on the route) were out in force, during a day of special off-timetable Olympic-themed events and activities.

It carried on down the A308, full of flag-waving supporters, changing hands several times. 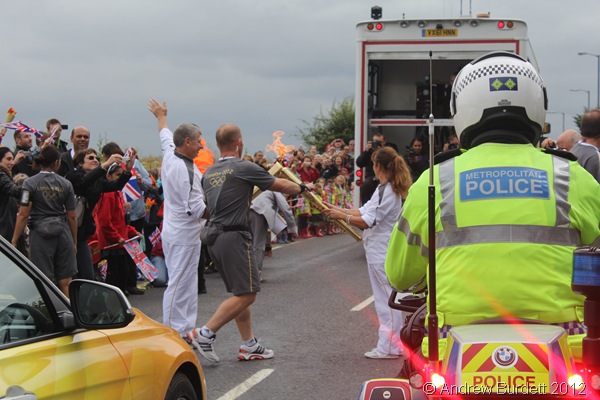 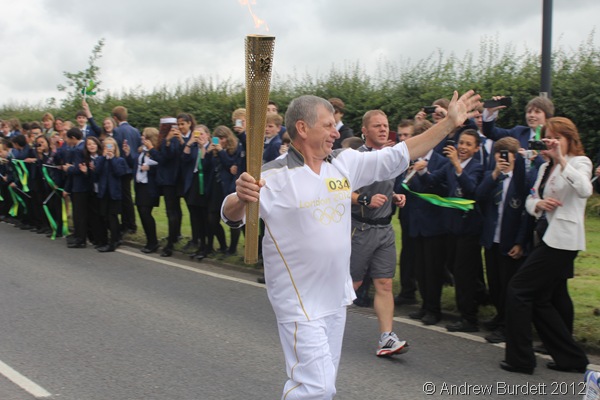 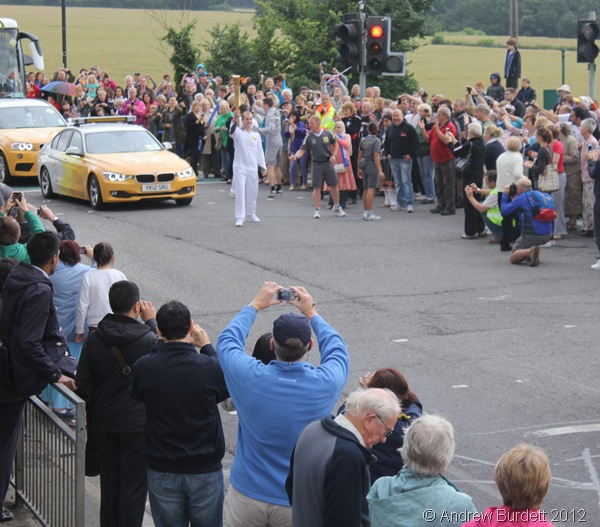 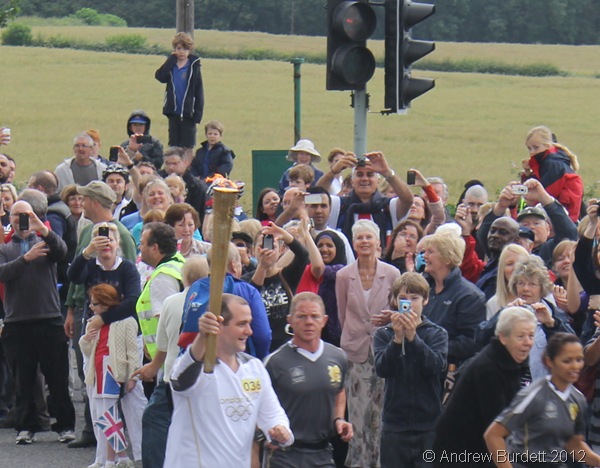 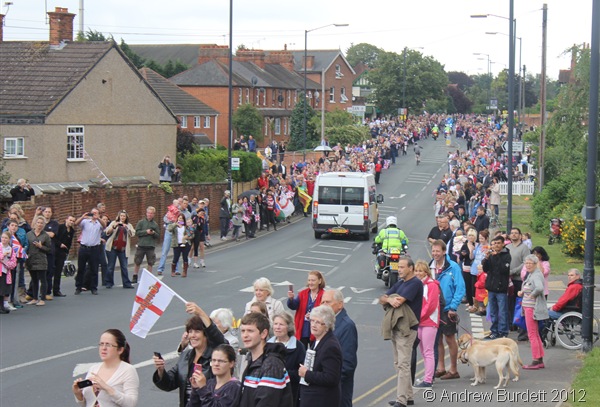 Meanwhile, further down the road, my Maths teacher mother was with pupils from her school, waiting for the flame to reach them – and was lucky enough to get a photo with Torchbearer Number 041. 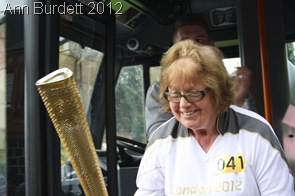 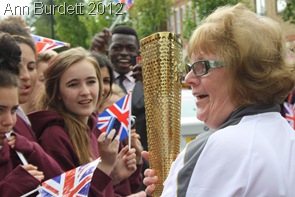 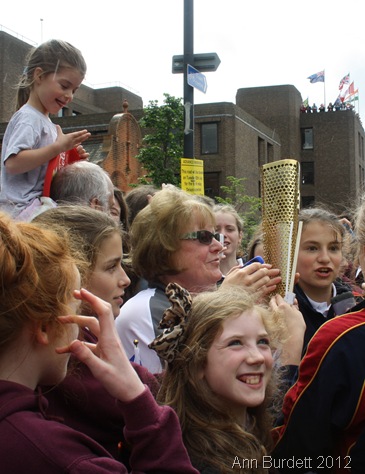 After reaching the bottom of Gringer Hill, the Torch made its way up Crauford Rise, passing a drinks station manned by members of three churches, including St Luke’s. 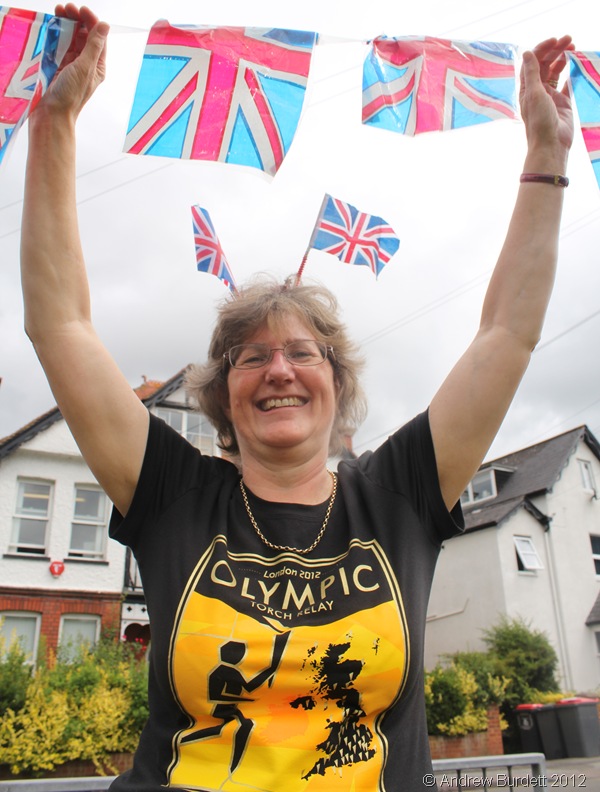 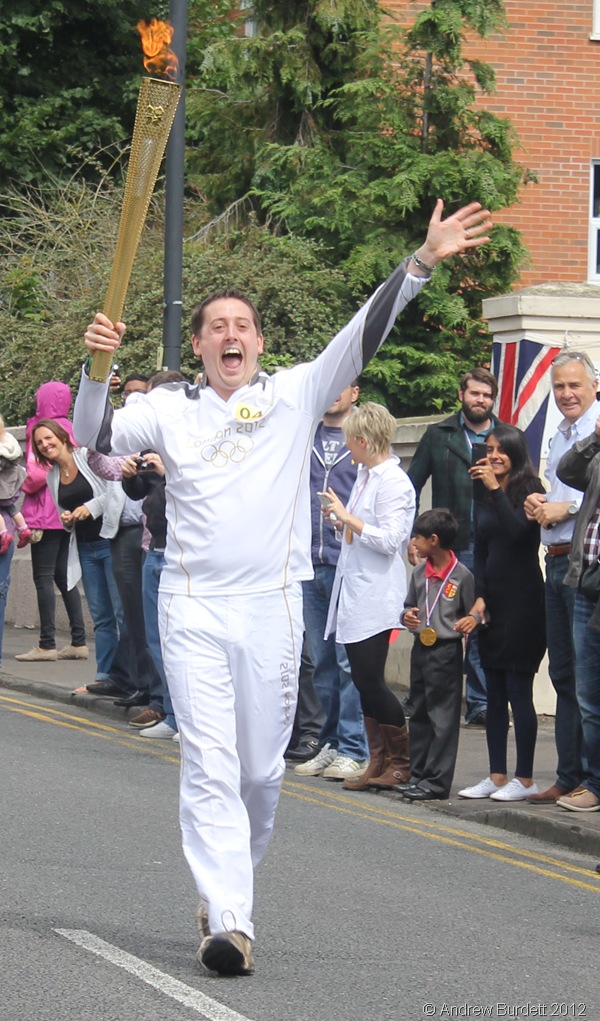 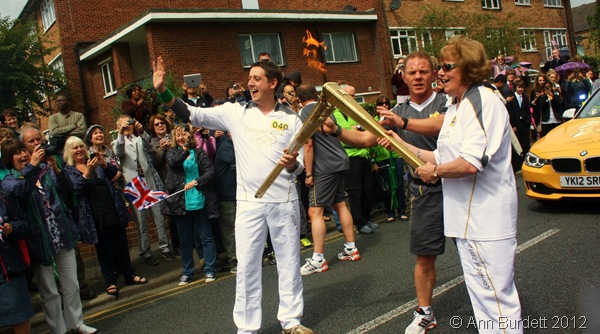 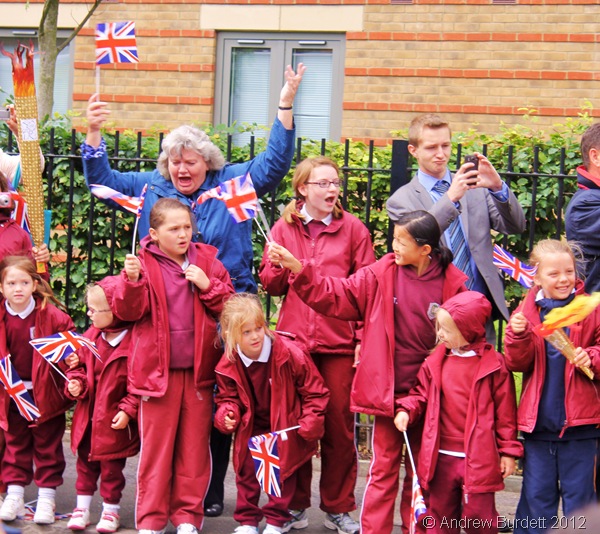 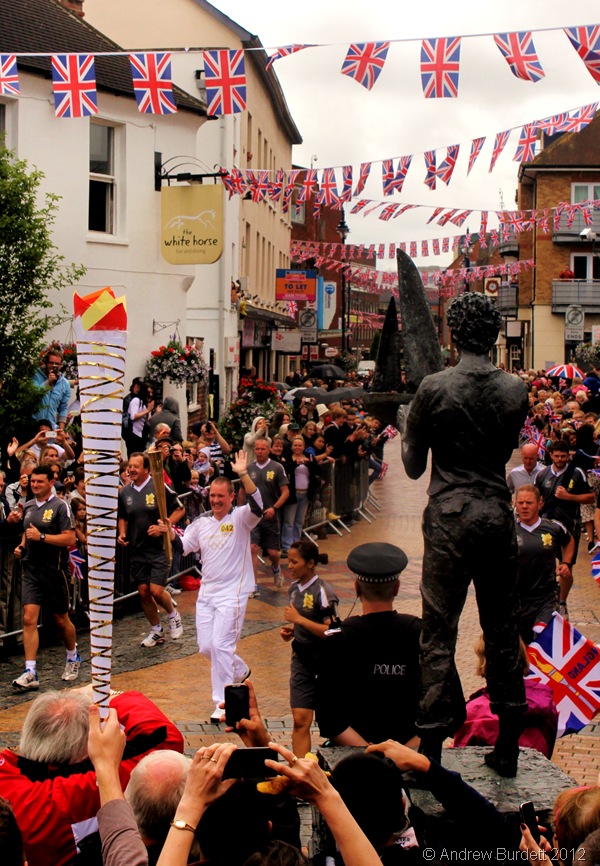 I produced this video of the Relay passing through Maidenhead using footage and stills from my SLR, plus clips from my video camera. As Paul Baker experienced during David Walliams’s swim of the Thames, it was difficult to know what to do next – take a photo, take a video, or move to the next vantage point. What I’ve tried to do in this video is simply offer viewers an idea of the scale of the turnout, and offer a few shots from such an historic day for the town.

There’s further coverage of the Torch passing through Maidenhead from the following providers: