While most of the town were still lying in bed, myself and my mother – cheered on by my brother and father – headed down to Boulter’s Lock, the starting point for the Thames Swim to Bray. 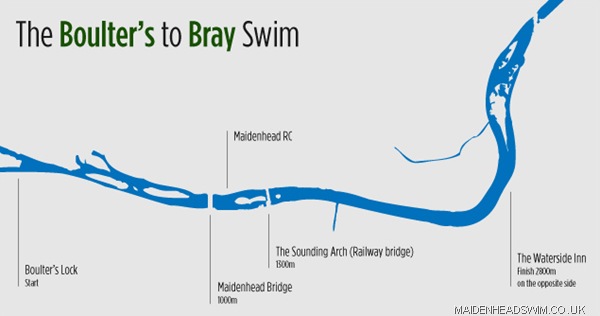 The open-water swim in fact dates back to the 1800s, when the course was known as ‘the Long Swim’. A once extremely popular event on the area’s sporting calendar, increasing costs meant it stopped in the 1960s. But earlier this year, both Mum and I independently read the same article in the Maidenhead Advertiser, and decided to sign up to take part.

“Right, wetsuit half-on, I’m ready to head down to the riverside to @swim_the_thames. My body is a wreck, may it be observed at this stage.” 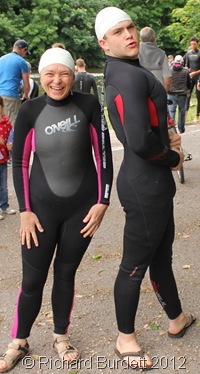 The level of the competition that assembled on the island was somewhat daunting: whilst both of us have competed at swimming galas at county levels in the past (Mum reaching a far higher standard than I ever did), those days are now very much behind us. I was, though, pleased to see – amid the many go-faster-clothing-clad mid-30s – one of perhaps only two other swimmers at my club who swim wholly for the fitness element and the between-lengths chats with other members, rather than for the regular competitions against other clubs. We spoke about the challenge that lay ahead, and both admitted that neither of us had ever swum any great distance in open water. 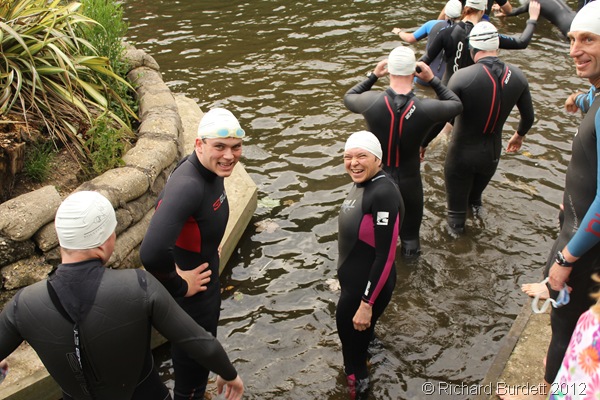 After donning our goggles and specially-branded caps, we warmed up by swimming against the current. Then, once everyone was in, a “3, 2, 1, Go!” countdown set us off. The really keen, experienced swimmers were off at a great pace, leaving the rest of us in a trail of bubbly white water. I didn’t really have a technique, but decided to start with front-crawl. Annoyingly, by the time we were out into the first channel, I was really struggling. Perhaps it was a result of my mere seven hours’ sleep in the best part of three days, or the strangeness of wearing a wetsuit, but I really did doubt I’d make it to the end. The 2.8 km seemed just so far, and it was pretty difficult to take breaths between strokes for fear of swallowing the water. 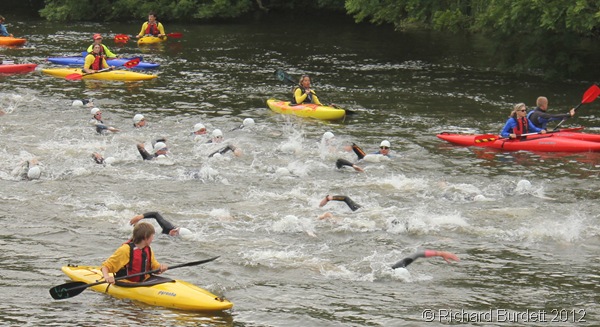 I changed to the much slower breast-stroke, allowing me to better take in both the view and, more importantly, the air. Instantly I felt happier – although it did slow me down. I became aware that I was at the back with the slowest swimmers, but I reassured myself with the knowledge that I was, at least, at the front of the back! 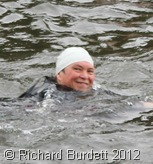 The recent heavy rains, of course, increased the flow of the current (to our benefit, as we were swimming downstream), but this was obviously only really noticeable immediately after the weir; the vast majority of the swim was heavy-going arm propulsion. Due to the murkiness of the water, it was difficult to see anything through my goggles, and on a couple of occasions I lifted my head to realise I was very close to swimming straight into the support canoes and kayaks. An incredible number of craft surveyed the route, ensuring all the participants were safe and well, ready to help if a competitor suddenly needed assistance. 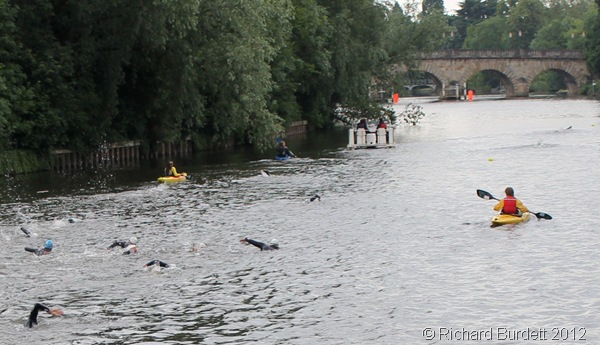 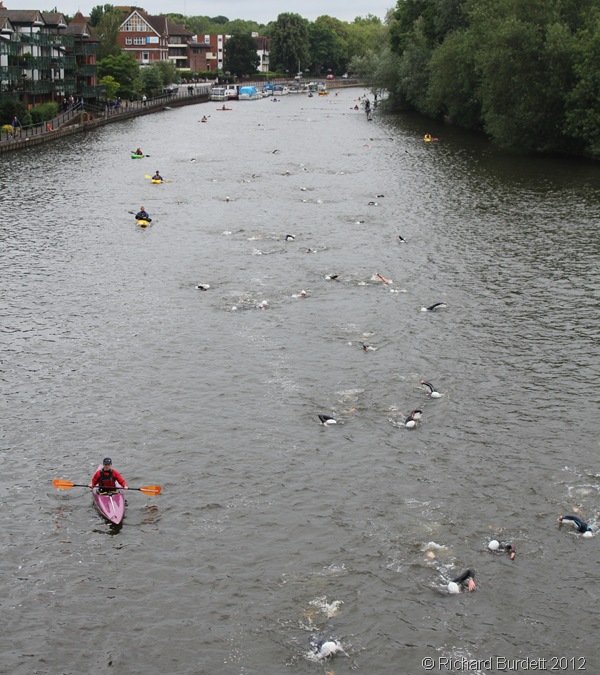 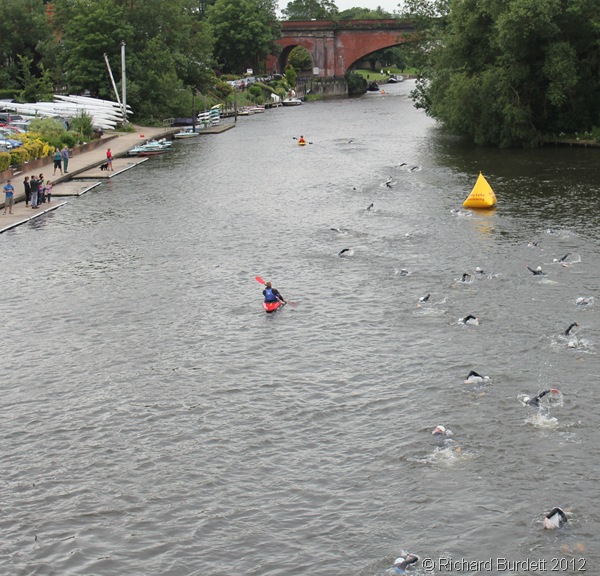 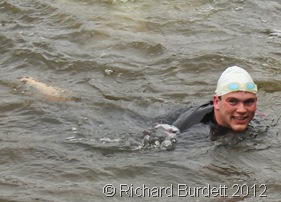 Along the course, giant yellow buoys marked the way to go, although they offered no clue as to the percentage still to go. As a result it was difficult to pace myself, and by the time I reached the end (the ferry launch opposite the Waterside Inn), I felt I still had a fair bit of energy still to go. Crawling up the muddy verge, the waterproof timing device we’d all attached to our wrists clocked us back in, though to find out our exact time we had to walk back to the Maidenhead Rowing Club and use the special printer. A little like any classic race on Top Gear, I genuinely had no idea whether the only person I’d tried to beat – my mother – had made it back before me, having been unaware of her relative position to me for the entire race. I searched through the many faces that lined the bank before finding the other members of my family. 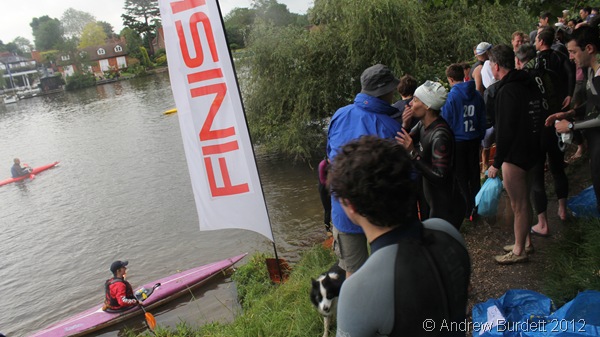 Fortunately, Mother was not one of them. I’d made it. I’d achieved my goal.

A staggering 118 people took part in the swimming, and of them six were ‘Juniors’ (four in the ‘Male Junior’ category, two in the counterpart female section). I was the slowest out of the lot of them, but only by a couple of minutes. My exact time was 0:36:59.3, placing me 74th overall and only eleven minutes behind the fastest participant, 16-year-old Alastair Bingham who finished with a time of 0:25:50.3. My friend Chris completed the course in just over 33 minutes, while family friend Howard Goldsmith finished in 33:27 minutes. Mum came 112th, completing the swim – amazingly without goggles at all – in 0:46:21.2

But for me, it was not my desire to achieve an enviable position. Sure, I’d hope to better my time if the event were to be run again, but for this year at least I’m delighted to have simply taken part in the return of such a novel competition.

“While you lot have been laying in bed, I’ve swum in the Thames and made a video to prove it. Boom: start to the weekend http://www.youtube.com/watch?v=Dw2n_AGwz9I”

Now watch my video of the swim. Most camerawork is by Richard Burdett, the rest by me.