Windy, cold, and overwhelmingly wet. But in the face of the Great British weather, our Jubilee Street Party was to go ahead regardless, as a hundred of Mallow Park’s residents and their friends and relatives celebrated 60 years of Her Majesty’s reign – in the rain. 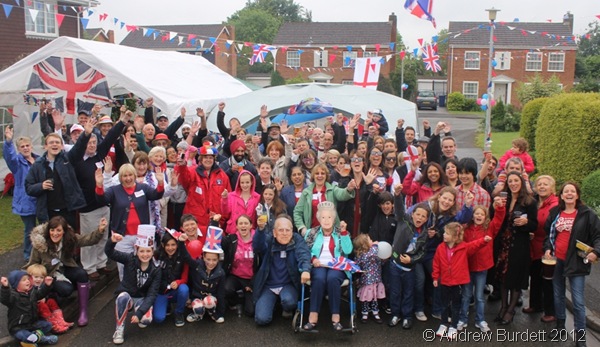 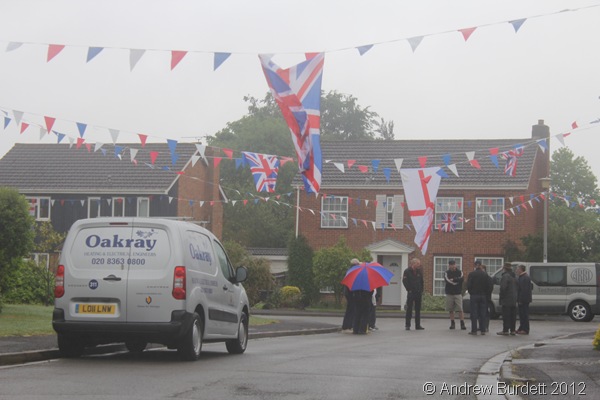 9:30am prompt, and Gavin – who initiated the idea of holding a street party and chaired the planning meetings – was out with a megaphone, wishing a very good morning (even though it very much wasn’t one) to everyone. Though we’d made a good start on the preparations 24 hours earlier, the bulk of what we’d done was just hanging bunting and decorations. We’d need shelter for the outdoor party, so our first task after manoeuvring the official ‘Road Closed’ sign into position was to assemble the half-dozen gazebos that would provide cover. There was, however, one too few for our needs, so it was agreed that Osman would drive down to Homebase to select and purchase one. He made eye contact with Matthew, my brother, and said: “YOU will come to buy gazebo with me, will you not?”. Matthew was all too happy to oblige and knew he’d be of assistance when it came to loading it into Osman’s car. That was until en-route to the garden centre, Osman turned to Matthew and admitted, “I have never purchased gazebo before”, and consequently didn’t really know what he was looking for. Then Matthew sheepishly replied, admitting he too had never chosen such a tent. An awkward, panicked silence fell on the car, as the two men continued driving, totally oblivious to precisely what they were driving to get. 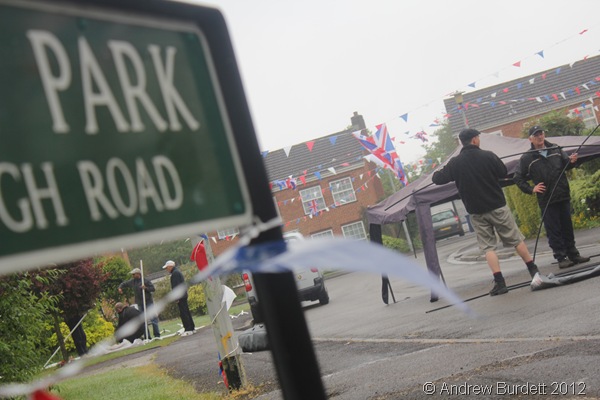 Back in the east of Maidenhead, in the pouring rain, the tents we’d already put up were proving essential, and the one I’d reserved for my PA system allowed me to be on a Mallow Park front lawn, out by the action rather than tucked away in a garage as had been originally planned. A multitude of barbecues, ranging in size and in fuel, were being noisily rattled down the bumpy road, as grills and lids shook as the barbecues were wheeled over the bumpy terrain to the designated cooking gazebo.
Little Gregor helped attach balloons to a number of lampposts, as some of the ones we’d put up previously had popped overnight. 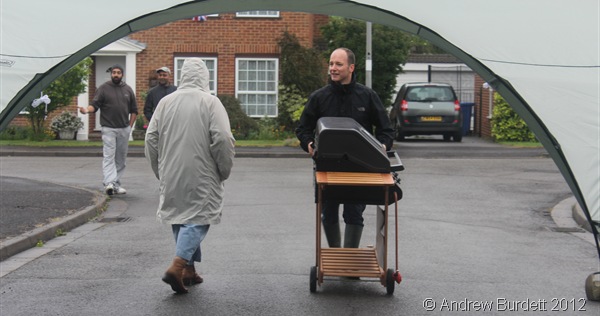 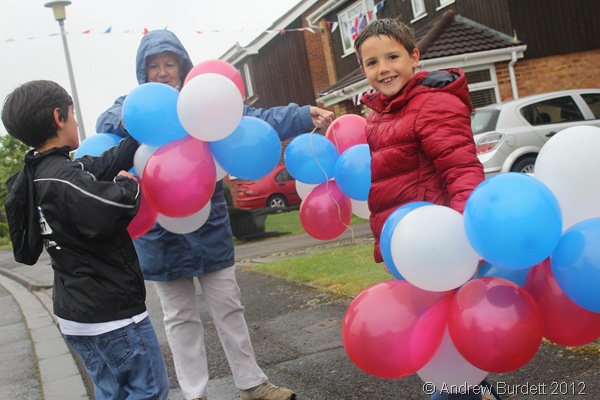 Ros made cups of hot drinks ready for a well-earnt tea break among the working party. These were left under yet another gazebo, presumably to stop them overflowing as a result of the unending rain.
By noon, we were all set. Beautiful floral arrangements decorated the tables; flags flew from every gazebo; and absolutely everywhere was plastered in Gav’s 500m of bunting. 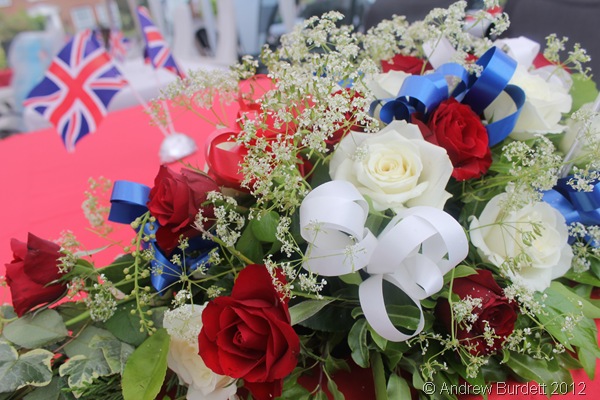 After a leisurely lunch break in our own homes, we walked out at 2:00pm while, over the loudspeakers, I rather appropriately played Dame Shirley Bassey’s Get The Party Started. Thanks to the PRS dropping music playback copyright restrictions for the weekend of the Diamond Jubilee, I was legally able to play each household’s favourite tracks from a pre-compiled playlist. 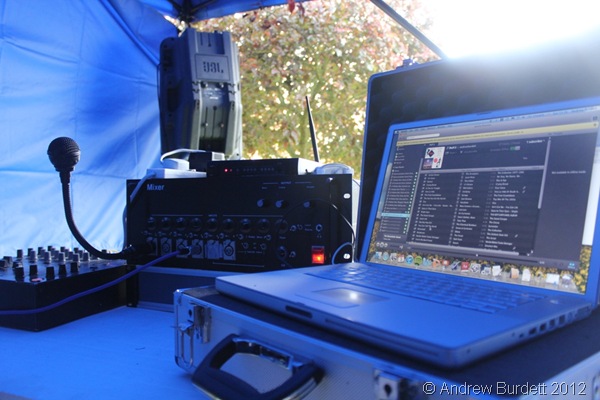 Mum had spent the early part of the morning decorating biscuits and buns (fairy cakes) for revellers to consume, and baked a whole lot more for younger guests to enjoy decorating themselves. Strawberry laces made up the red crosses of the Union Flag, blue and white icing stood in for the rest. It all made for rather sticky fun, but younger children enjoyed their delicious sweet treats. 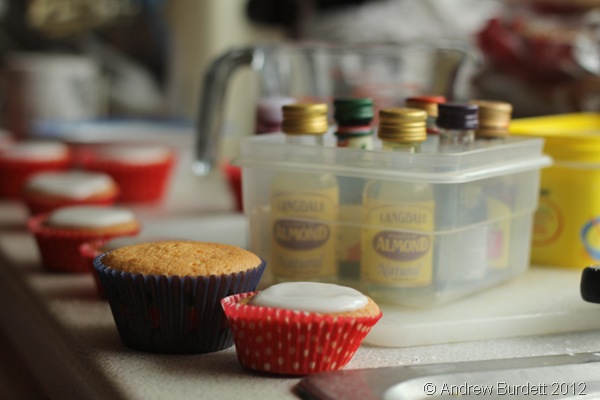 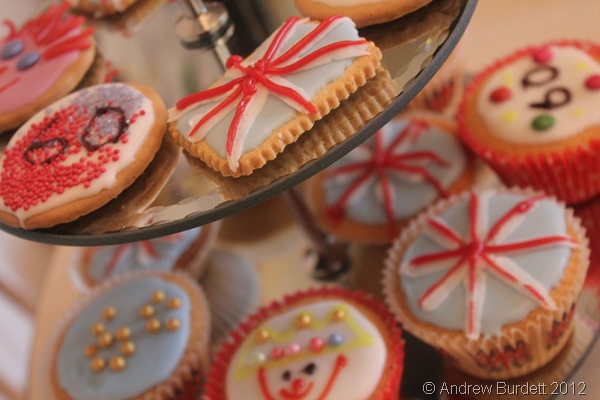 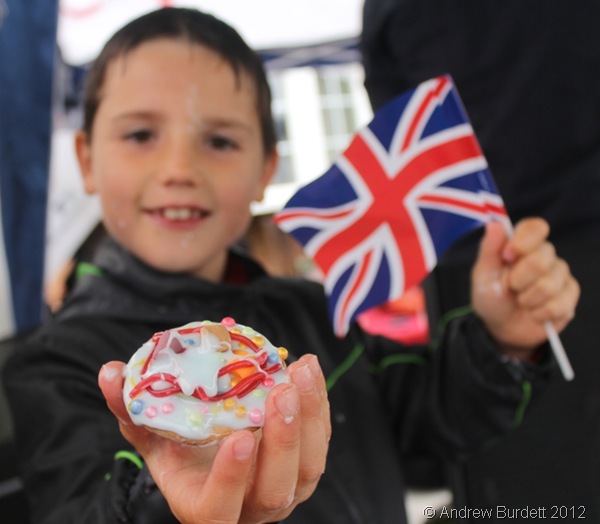 For much of the afternoon, a team of men were behind a screen of smoke, as they busily cooked the vast amount of meat bought earlier in the week from a wholesale store. However, they managed to escape from their barbecue duties to take part in a series of games Mum organised, one of which involved competitors completing a kind of obstacle course, which made for hilarious photographs of my father skipping, shown up only my Planning Committee Chairman Gavin. 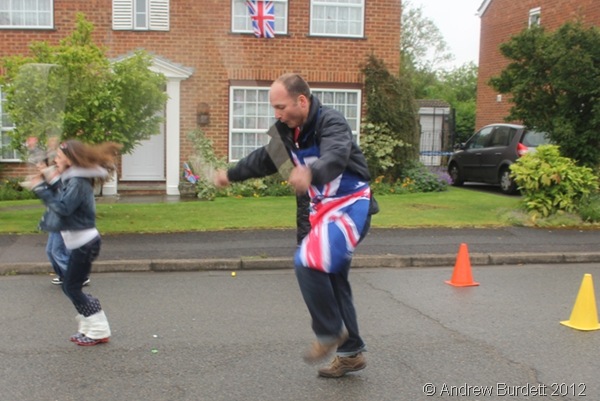 Other well-spirited games included the traditional passing of a ball under legs and over shoulders, and passing a Polo mint down a line of teams using only straws (the use of hands was officially prohibited, though few followed this law to the letter – or at all, for that matter). 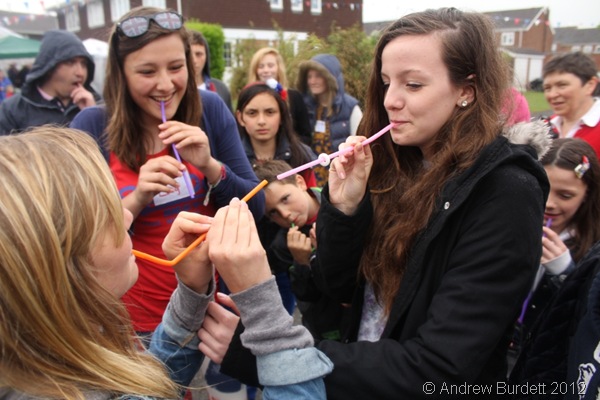 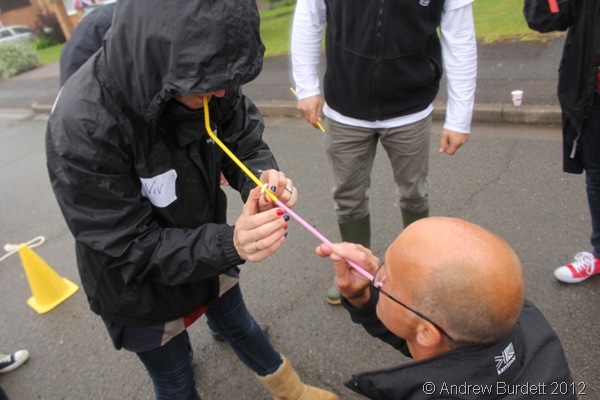 One particularly enjoyable game saw families and friends wrapping one team member up in loo-roll, after my own mum cried “Three, Two, One, Mummify!”. 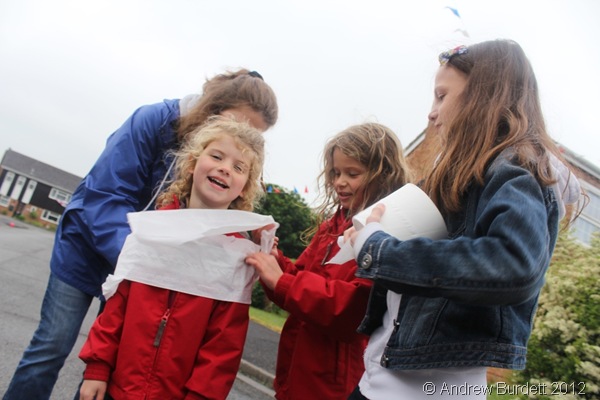 With the weather continually teasing us, one minute raining heavily, the next offering a break in the precipitation, Mother’s games were interspersed with drink breaks – squash for the children, while ‘bigger kids’ enjoyed altogether more alcoholic substances. 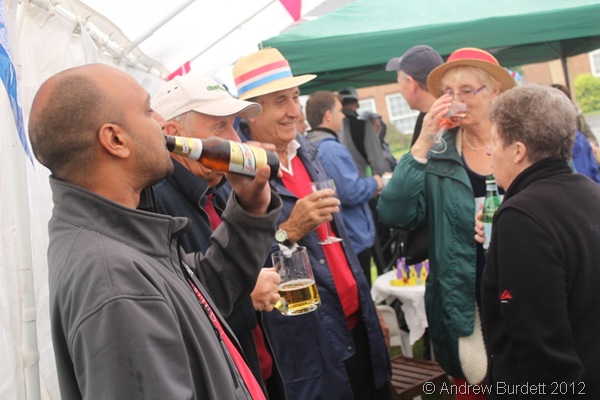 It was great to have so many residents and their friends and relatives effectively all under one roof. Shamefully, like many people across the country, for me it was the first time I’d seen many of the faces there, despite so many of them being neighbours. Out of 34 households on Mallow Park, only two or three homes RSVPed negatively to the invitations we’d sent out, resulting in a total of 109 people present.

As the party went on, and the base of the kerbs became rivers, bellies became hungry. This was no problem: we’d asked everyone with an even house number to bring along a salad or savoury side-dish, while everyone with odd house numbers would provide the desserts. Thus, the end result was a plentiful supply of food, refuelling all. 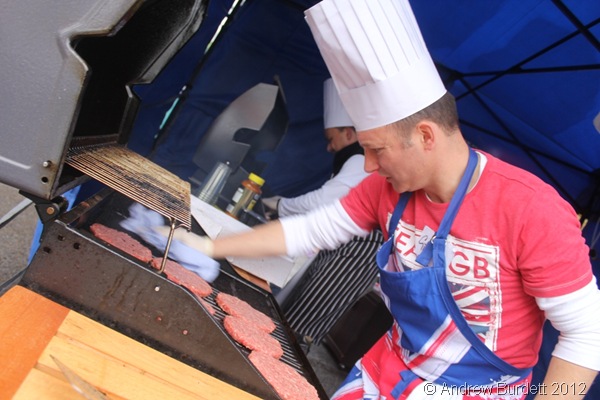 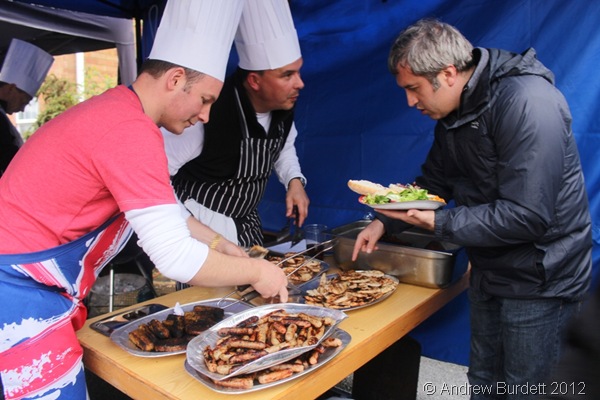 ‘Gin Palace’ (a champagne and more luxurious drinks gazebo), occupied by friends Kate and Andrew and some of their own acquaintances, was keeping the party in good spirits, relaxing everyone enough to at least chuckle at the sight of fully-grown men and women playing netball in such a childish unregulated fashion as occurred along the longest stretch of the street. 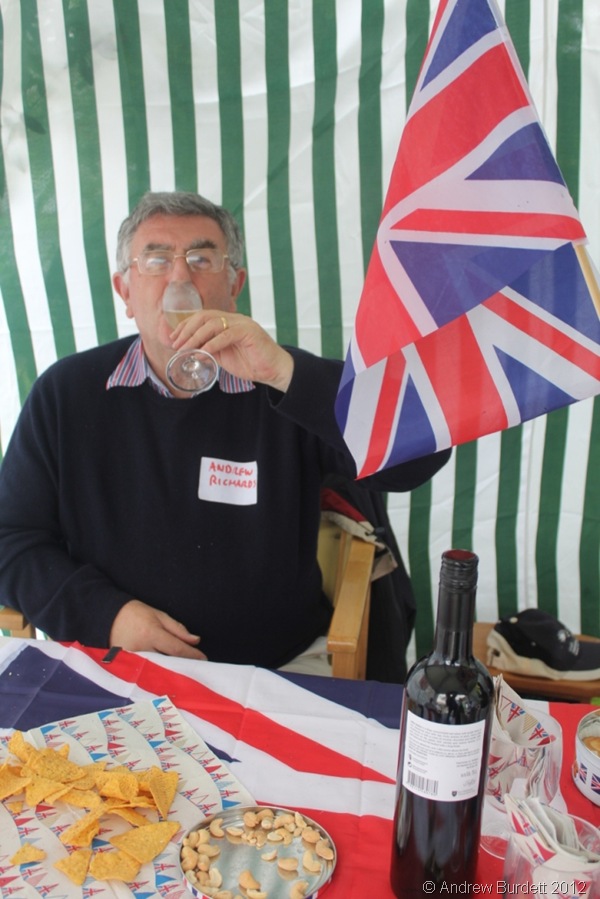 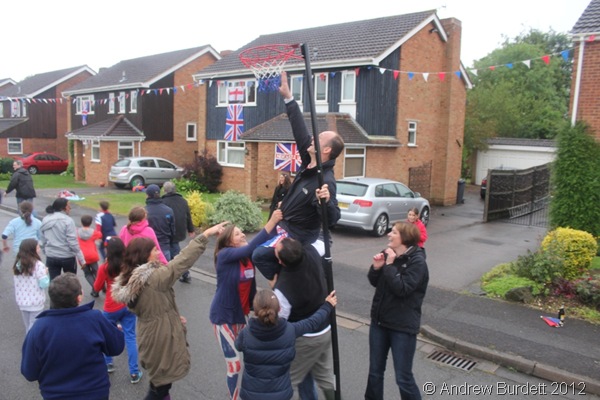 With everyone fed and watered, we drew the raffle in which I won a brilliant £15 iTunes voucher. Mum and Dad drew one of the two top prizes, winning a one-night stay in a De Vere hotel, but it was someone else who won the star-prize helicopter flight. 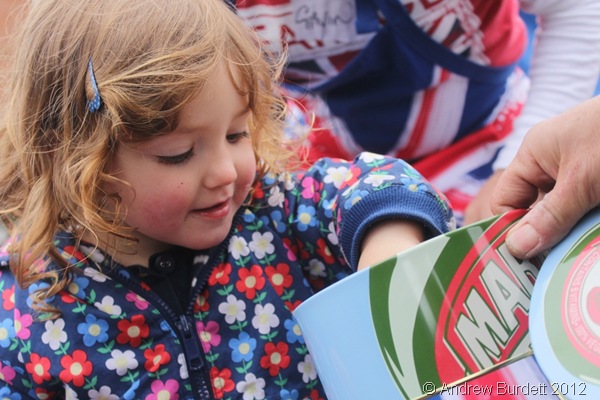 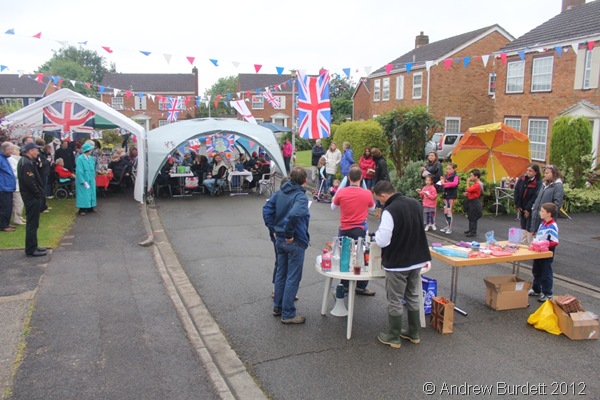 With the daylight fading, we switched on the lighting on our Jubilee Crown in the garden, and the sight of it was marvelled at by young and old. 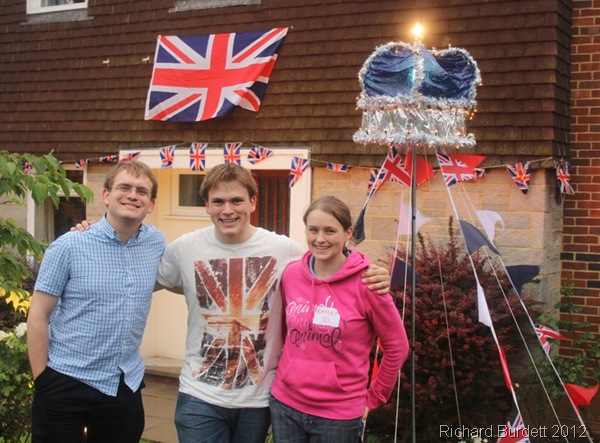 My intention had been to kill the music at 9:00pm for the benefit of non-Mallow Park residents, and indeed the grandchildren of one lady whose windows a speaker was positioned beneath. But it seemed the party didn’t want to stop, and every time I made an attempt to announce “the last song” or tried to at least turn the music down, some of the more merry came into my DJ tent to turn the knobs clockwise and slide the faders up. Thanks to a large marquee, we were all dry, even though the precipitation – now pouring – made it difficult to get my non-essential gear (I used a broken wheelbarrow) home and dry. Yet the sound of lively conversation and laughter kept the celebrations alive long into the night. 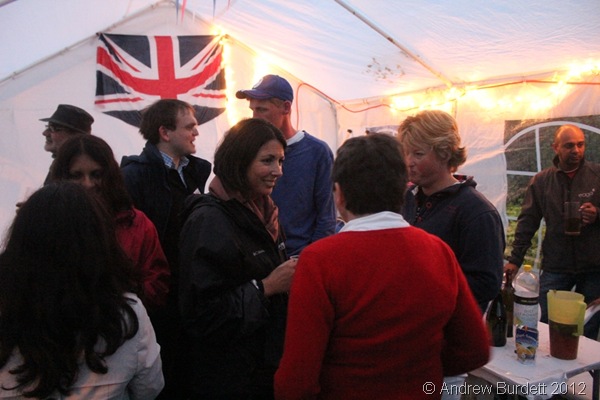 So yes, it was windy, cold, and wet, but it’s for the smiles, fun, and friendliness that I’ll remember the 2012 Diamond Jubilee Street Party. And, now we’ve all got each other’s email addresses – which we didn’t after the 2002 Street Party – there’s great hopes that the next time we meet won’t be the next street party, but some other gathering in the interim.

Below is the video I made of the day.