The morning began with somewhat of a panic for me: my own incompetence had led me to mistakenly believe I’d be in the Sports Hall for today’s English Literature Unit 1 (Modern Texts) exam, as indeed I had been for both the Drama and yesterday’s Biology papers. In fact, no, I was to sit the paper in the library with a minority of people, but after a quick phone call home I managed to sort myself out and get myself into the right place. 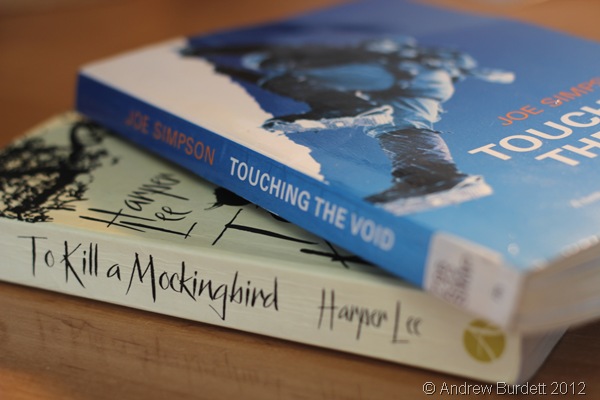 Our class were very unusual in the books we studied; the vast majority of our fellow Year 11s had learned about the 107-page 1937 novella Of Mice And Men and JB Priestly’s 79-page play An Inspector Calls. We, however, had the 224-page Touching The Void (Joe Simpson) and the 296-page To Kill A Mockingbird (Harper Lee) books to read. I must confess, though I enjoyed the language of both books (especially the latter) immensely, their sheer length meant I probably didn’t read them enough times.

When the exam finally began, I was pleased to read the choice of questions on Simpson’s book: one asked about the way Simpson builds tension in the opening chapter, and the other asked about the portrayal of the ‘backup man’ for the climbers’ ascent. Feeling more confident on the first of these two questions, I spent a large amount of time jotting ideas down around my question booklet, and then eventually started writing what I hope will be a higher-scoring answer (both questions in the 90 minutes are out of 30 marks). I even had a new interpretation of one passage, and wrote quite boldly on that bit.

The compulsory question on Lee’s book, however, I found more difficult, and though I could analyse elements of the passage provided, I really struggled with finding enough good examples of how Scout does not meet expectations in the book as a whole as it requests.

Still, it could have been a lot worse, and I’m pleased I managed to write at least something.