This being the first exam of my busiest week of the exam season, I’ve little time to write this post, but just quickly here are my post-exam thoughts on today’s Biology B3 paper. 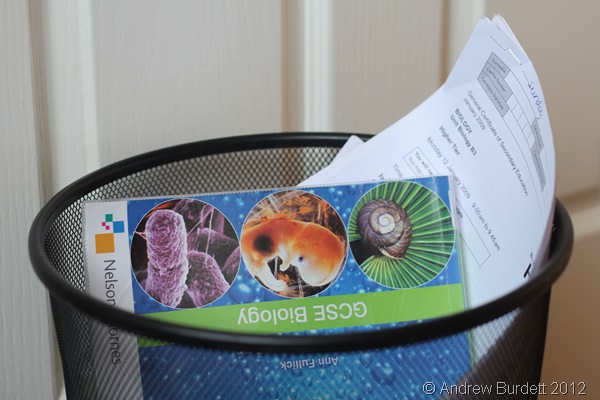 To my surprise, I was able to answer all of the questions in the booklet. I haven’t necessarily answered them correctly, but after a moment’s thought in some cases, I managed to jot something down on ever dotted line.

Unlike some of the past papers I completed, I wasn’t able to race through the first three questions – they really did make me stop and think, and that seemed to be the general consensus among many of my classmates.

One of the questions was really confusing, and another (at the time) seemed to be weirdly worded: it asked for the “precise name” of a process involving oxygen, which I guessed meant aerobic respiration. Perhaps the question that will stick out in everyone’s minds, though, is the one that asked us about ‘Olaf the Norwegian Farmer’. This man, we were told, did not add fish fat to his biogas, despite evidence that it did increase the amount of methane present. In response to a question asking why, I was tempted to facetiously answer ‘He may not like touching dead sloppy fish’, but I actually wrote words to the effect of the fact that the energy involved in transporting fish the 110 km distance from the sea may not be worth the tiny increase in methane present.

Overall, then, I was relatively pleased with how I’d done as I walked out of the exam hall, especially considering how worried I’d been beforehand, but am lucky enough to know that even if I don’t do well in this paper (as I probably won’t), it’s ‘a mere’ 25 per cent of the final GCSE Biology grade.