After what can generally only be described as disappointing results across the whole year group back in 2011’s sitting, both GCSE Drama classes today retook the written paper than makes up 40 per cent of the final subject grade. (The other sixty per cent comes in the form of two performances: one devised, one scripted.) 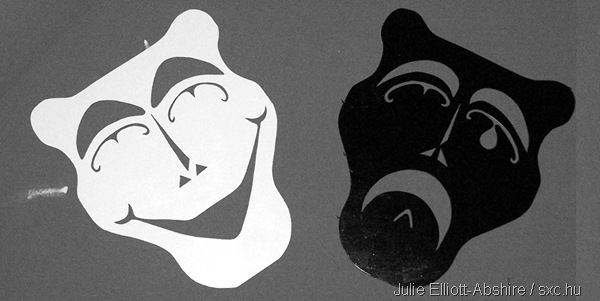 The Drama exams are always difficult beasts to revise for: the questions are quite vague while the mark-schemes are the opposite, and there were just two past-papers for this year’s candidates to look at. Furthermore, it seems in order to score top-marks you need to able to write faster than Philip M Parker, and write well.

There is some consistency between papers, though. The first section always asks about a piece you’ve been involved in producing (whether as actor, designer, or technician) and then a choice of sections allow you to write about a piece of professional theatre you’ve seen during the course. However, the sub-questions within each section can differ immensely, and for the latter section we were all advised to know – in-detail – at least four completely different scenes from our chosen play.

This paper wasn’t bad, I don’t think. It wasn’t great, but then I hardly ever say that after an exam. I think I’ll have done better in the first couple of questions (from the compulsory Section A) than in Questions 10 and 11 (from the ‘optional’ Section C), which asked about one actor’s successes. I don’t think I described enough facial expressions in enough depth, or detailed enough about the pitch, pause, tone, and volume of my chosen actor’s portrayal of his character. But I do think I’ll pick up marks from that earlier part of the exam, in which I made sure I answered everything it asked for.

I did take a risk in what I wrote about, going against the advice of my teacher. Most of the theory paper preparatory work we’ve done in class in the last couple of weeks has been focussed on our latest scripted performances, and on the performance of Memoirs of a Biscuit Tin by Maison Foo everyone but I attended in March (I was at a Taplow Youth Choir rehearsal). Instead, I wrote about my group’s devised piece from Year 10, and on Lilly Through the Dark (another Fringe piece), presented by The River People, which I saw in October 2010.

But why? Surely it’d be much, much easier to write about something that’s fresher in my memory? Yes, probably, if it weren’t for the countless exam-style answers I’ve written on those subjects in the last two years.

I’m quietly confident that I’ll get at least an equal grade to my B from last year. But if I don’t, it doesn’t matter – I can ‘cash in’ 2011’s B instead alongside my two performances.

At the end of this first week of the exam season, I’ve had just two exams (the other was the Music Listening paper on Monday). But with the curtain now truly up on this ‘testing’ period, there’s so many more exams to come.