Following successful trips to Belgium in 2004, France in 2006, the Netherlands in 2008, and Yorkshire in 2010, this morning 42 St Luke’s congregation members and their friends arrived at church to begin the 2012 three-day trip to Norfolk and the Broads. Unlike previous May bank-holiday weekend trips, which were organised in association with a third-party travel company, for this one Dad took on the role of ‘tour manager’, organising everything from the initial promotional flyer to the booking of transport, the hotel, and the day excursions. Once we’d parked on the rather appropriately named Norfolk Road, Dad’s first job of the day was to count everyone onto the Lianne coach (to be driven by Michael Poynter, the husband of trip attendee Helen), and make a phone call to the one person found to be not present by the count. After finally getting through, it transpired that the lady concerned had simply overslept, and within 20 minutes she was on-board and we were ready to go. 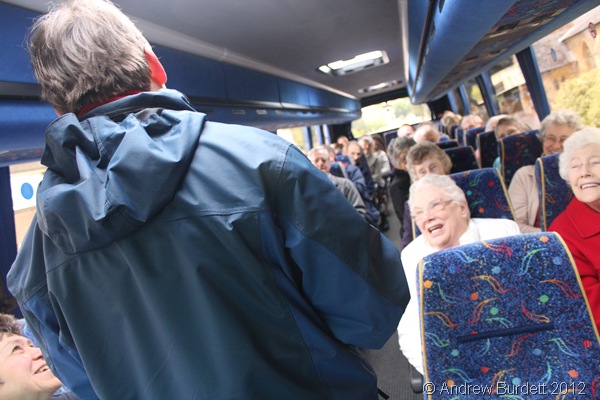 En-route, we made a stop at Welcome Break Birchanger Green, just under the flight-path for Stansted. With our bellies filled with breakfast, our bladders emptied, and our legs stretched, we continued on our north-easterly drive before finally passing a ‘Welcome to Norwich’ signpost at about 11:45am. 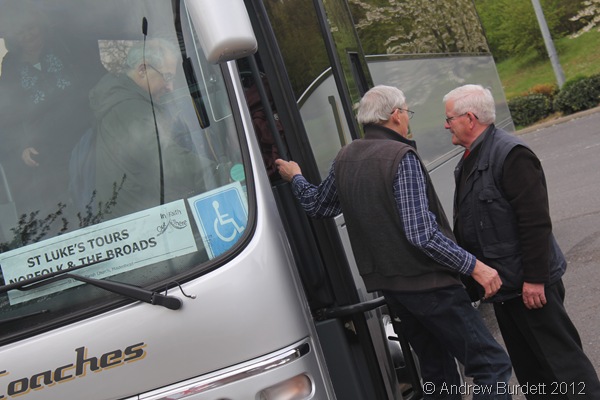 We pulled over and I was one of the first to jump off the coach. Out of nowhere, a shackled old vehicle came swinging around the corner, and stopped parallel with us on the other side of the road. ‘Here comes trouble’, I thought, assuming the smartly-dressed gentleman that emerged from the strange vehicle was about to complain about the location in which we’d chosen to drop-off the party members. Sure enough, the man crossed the road and demanded to speak to our own driver. But, contrary to my preconceptions, he was not a jobsworth council worker (and, for the record, we were parked legitimately anyway), but in fact an old boy just looking to plug his tour of the ancient city. 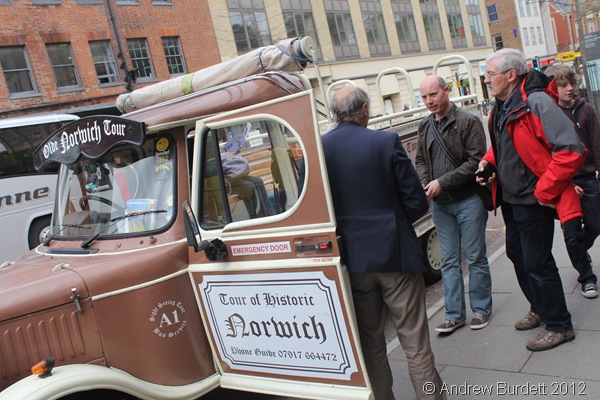 Though at first I felt like flesh for this vulture, who’d clearly been preying for his next bunch of thick-walleted coach trip tourists, after a little consideration I decided to join half a dozen other members of the St Luke’s party on the man’s driven tour of Norwich. 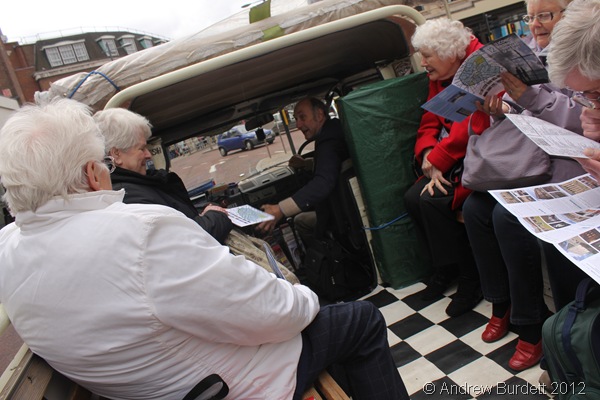 Wearing a shirt and tie, jumper, blazer, and cream chinos, and with severe pattern baldness, Frederick Agombar – as his self-made badge read – looked even older than his clapped-out Ollerton Motors of England truck he helped us board. 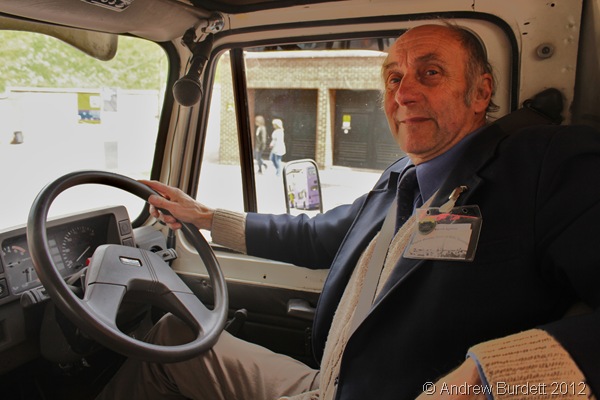 It had all happened quite quickly. Within just minutes of him stepping off our bus, we were away on his, and our open-top tour had commenced. Actually, I say ‘open-top’: very quickly it started to rain. But no matter, for he stopped (with little warning to other road-users) to allow us to erect the canopy that stretched above our heads and covered the ‘deck’. Don acted as a centre tent-pole, supporting the canvas until Ben and I had attached the velcro-straps to the role-cage type structure that we had to first put up. May and Helen looked on, laughing hysterically, and then Frederick stepped out of his ‘cabin’, looked around, and declared (in suitably biblical fashion) the rain to have stopped. Despite this, we thought it wise to leave the roof on, just in case another shower were to hit us. 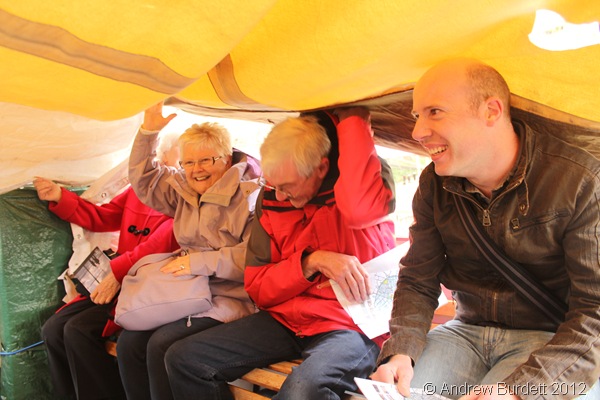 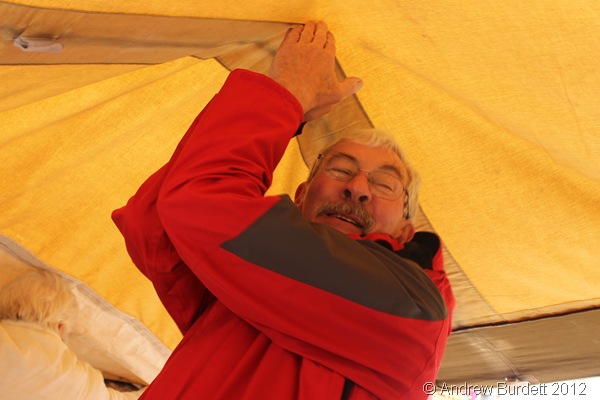 There seemed to be no apparent order to our drive-around, but rather a route being made up as we went along by Frederick. Though there was somewhat of an information overload, I remember a lot of what he said. For example, I learnt that the bricks on the roundabout mark the footprint of the old wall of the city; that Nelson (described as “Britain’s greatest hero”) was educated at the cathedral school; and that Norwich Railway Station is based loosely on Castle Howard. 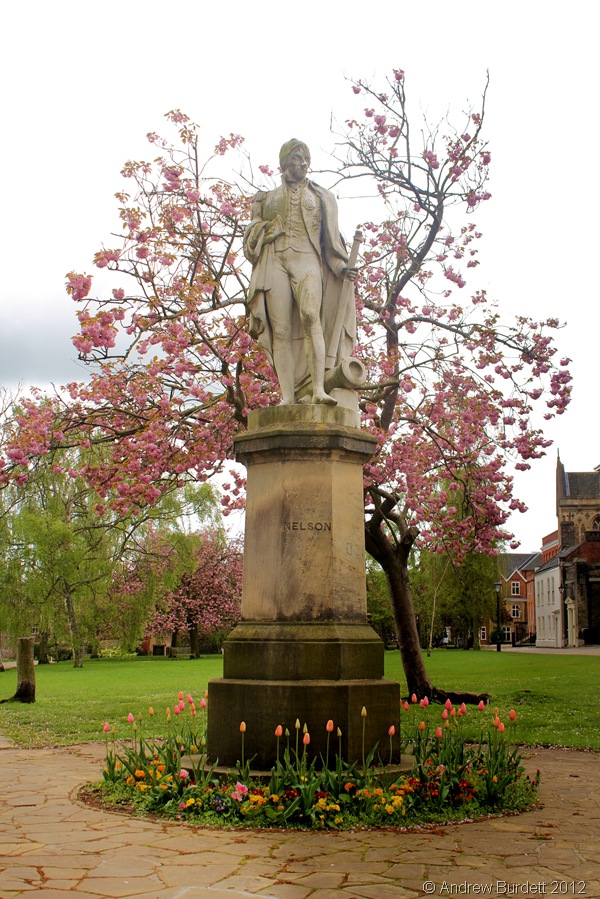 Without going on the rat-run, I’d probably have never known that Hitler reportedly loved the design of the town hall building (and therefore didn’t bomb it, whilst around it the city burnt), or that one building has had its whole life in justice (as a coroner’s, a prison, and a court). 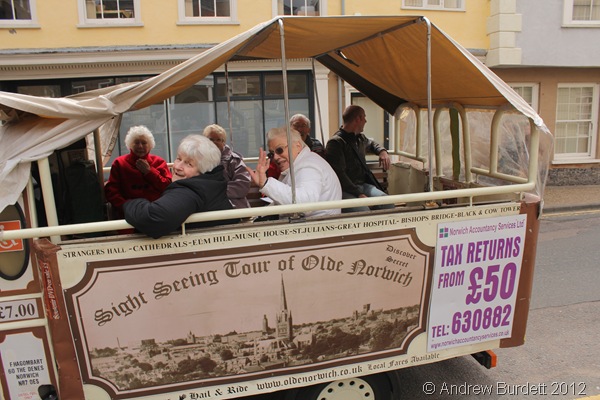 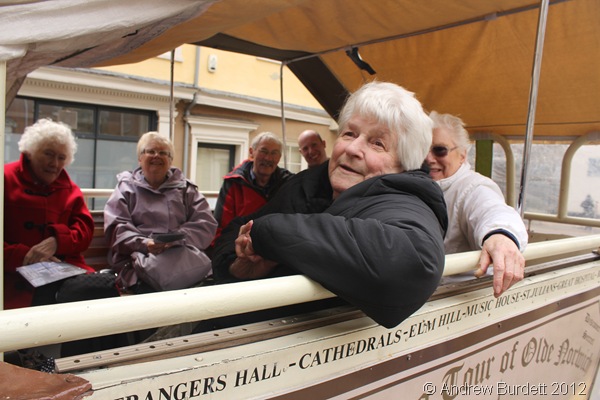 Perhaps most interesting to me was that out of the 52 churches Frederick told me there are in Norwich in total (there’s five on just one single street we drove down), very few are consecrated any more. Instead, the serve as everything from museums to puppet theatres, and even a probation centre.

"We’re going to have a bit of trouble getting out of this little road, gi’z a minute.", he’d say. 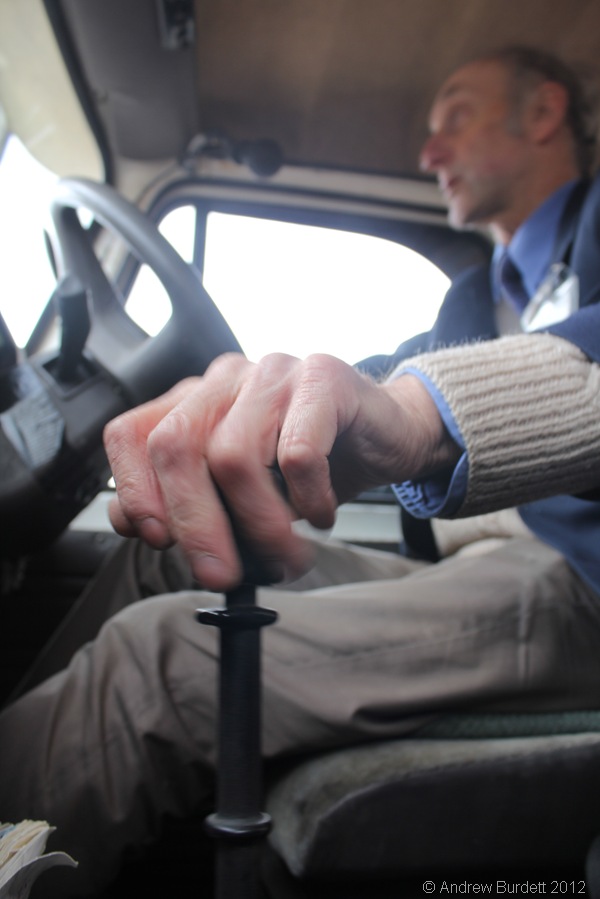 My complaint is not over our tour guide in his capacity as a tour guide – after all, he certainly knew his stuff. Yet I was concerned by the way in which he shared ‘his stuff’ with us. Banging on his goose-neck microphone to draw our attention, before turning around to face us (moving his mouth away from the microphone in doing so), and pointing sharply to examples of his various subjects as they pass on either side of the van – all whilst keeping his foot on the accelerator and with his eyes only occasionally on the road. 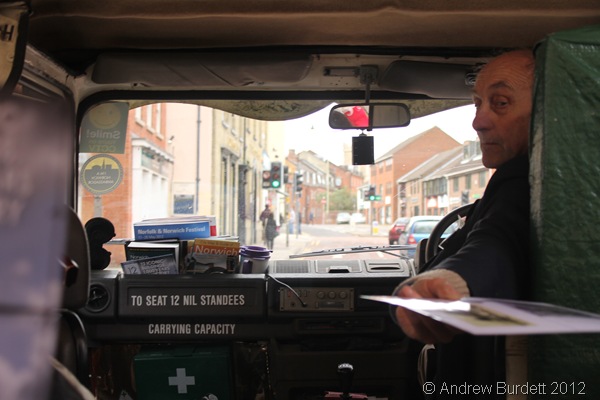 A subsequent Googling of his name reveals that Mr Agombar, now in his mid-sixties, was jailed for 28 days in 2002 for causing unnecessary suffering to the horse that towed his cart tours of the city. Perhaps he, hair-raisingly, driving a motor is better for everyone than his former form of horsepower. 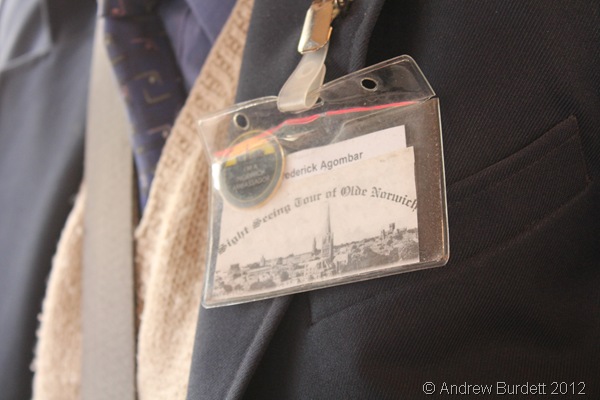 We each paid our £7 fare as he dropped us off at Norwich Cathedral, after a much longer (and much better value) tour than we’d been expecting, just in time for the 2:00pm walking (‘Thank goodness for that!’ I thought) tour. Though I listened intently at first, ultimately I became quite restless so instead went off to photograph the east window, cloisters, and spire. Mum and Dad, alongside a large number of the St Luke’s contingent, did stay and listen and found the whole talk fascinating. 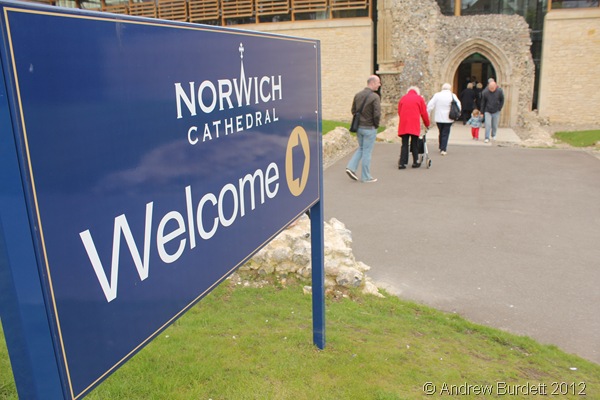 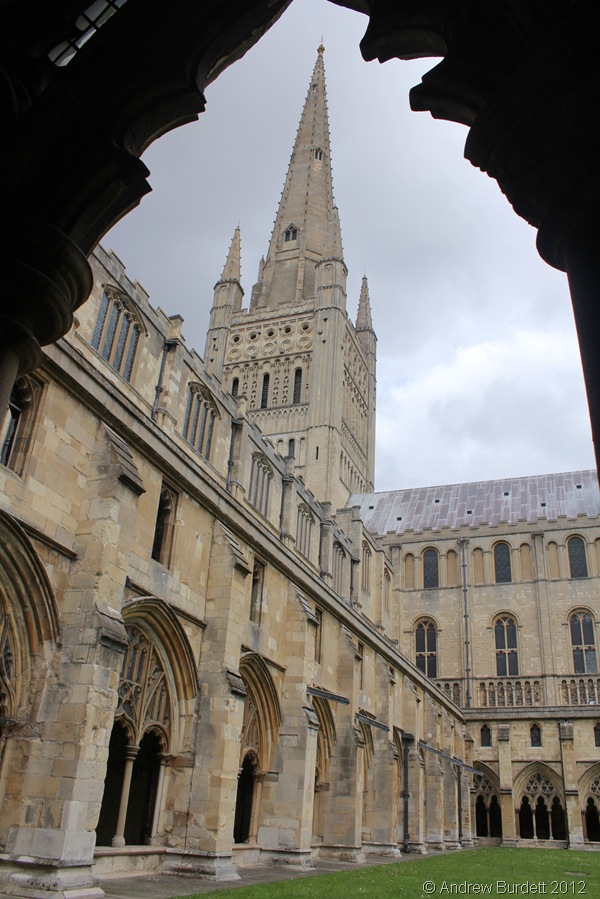 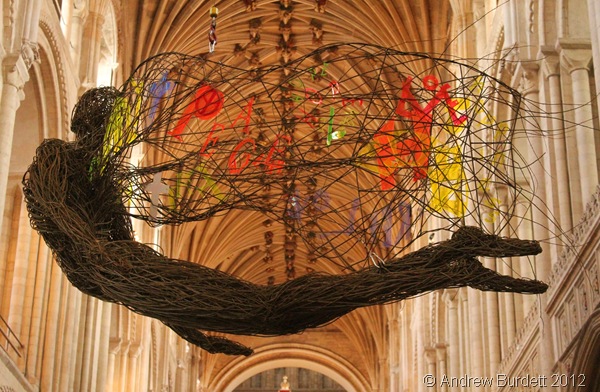 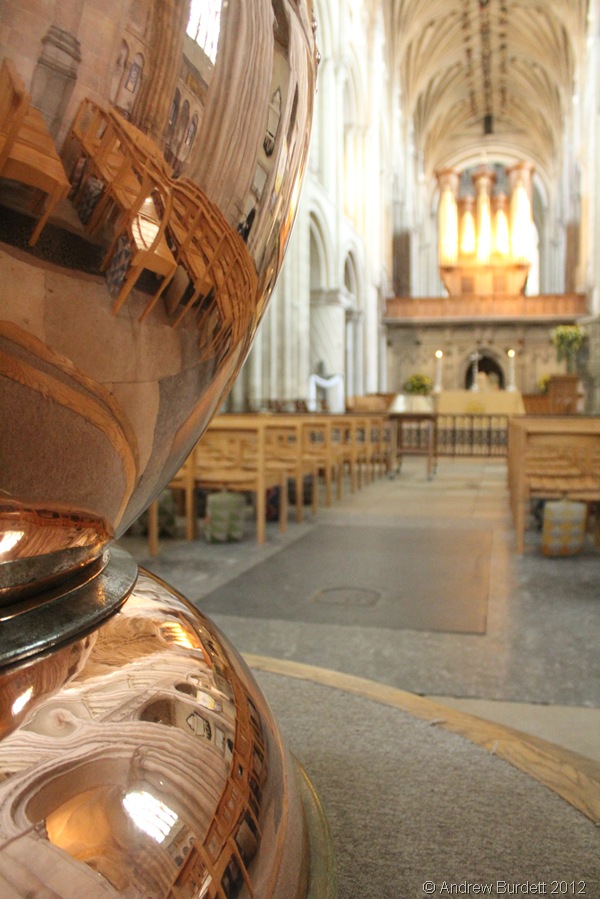 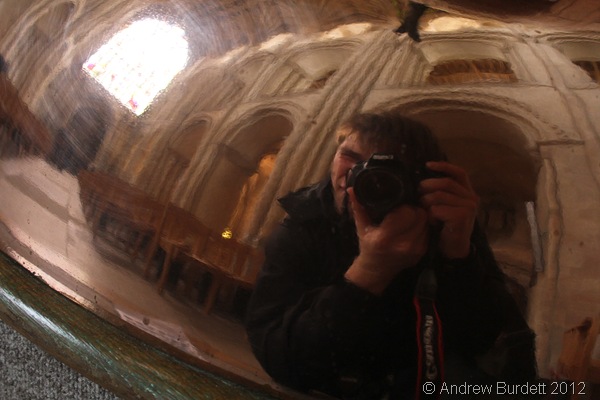 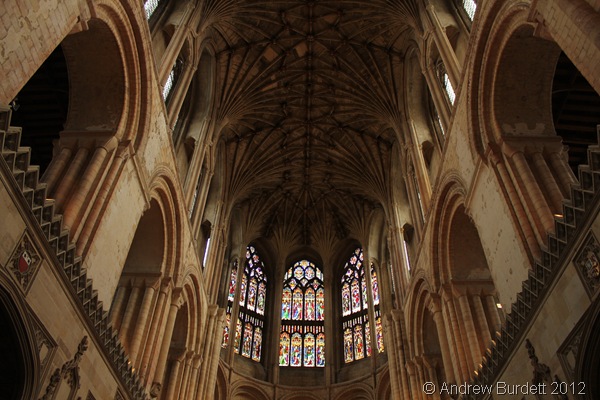 By 3:15pm, I still hadn’t walked through the numerous shopping centres or busy high streets that Norwich has to offer, so I decided to lose myself in the multiple fashion stores and book shops before finishing up in a Costa Coffee. 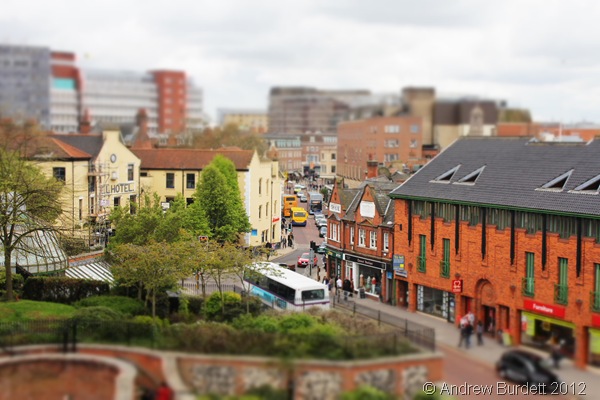 I had enough time to walk to the top of the mound on which Norwich Castle stands, allowing me a view out over the city. Whilst it wasn’t a vantage-point to die for, one could see down the narrow alleyways all the way to the marketplace, which has stayed on the same site since Norman times. 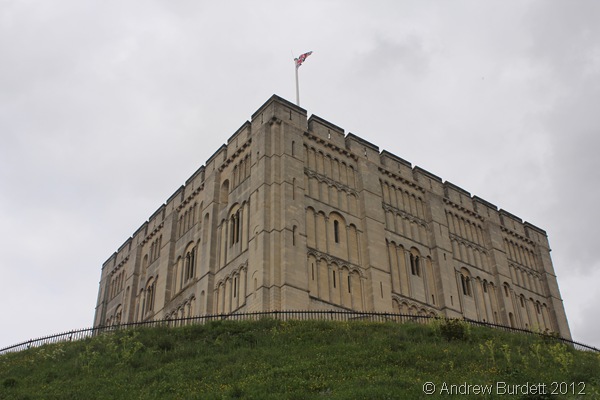 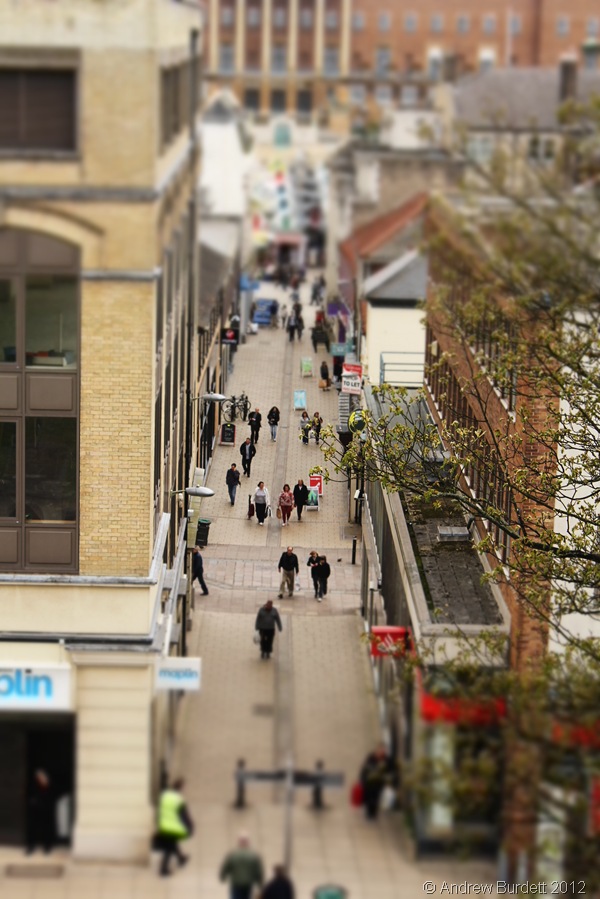 At 5:00pm, Michael arrived with the coach at the same place he’d dropped us off at lunchtime. It was then a 45 minute drive to the Virginia Court Hotel in Cromer, and many took the opportunity to catch forty winks.

After I’d helped with the unloading of the luggage, I checked in and ran my numerous bags upstairs to the twin room I would share with Matthew. In a bid to avoid a lengthy queue at the reception desk, everyone else was encouraged to leave their suitcases in the lobby downstairs and enjoy a cup of tea in the bar lounge area of the hotel. It was a very wise idea, as it prevented a repeat of the saga that we experienced in Leeds in 2010. 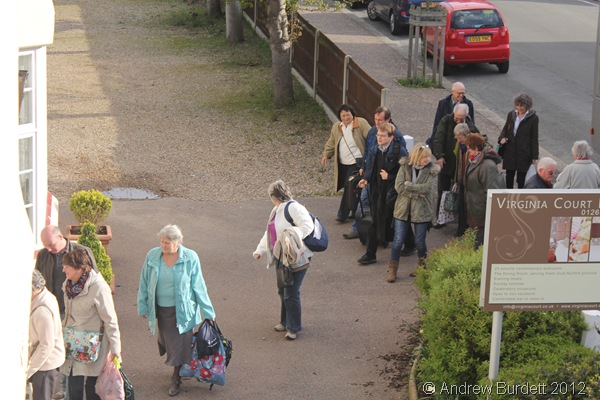 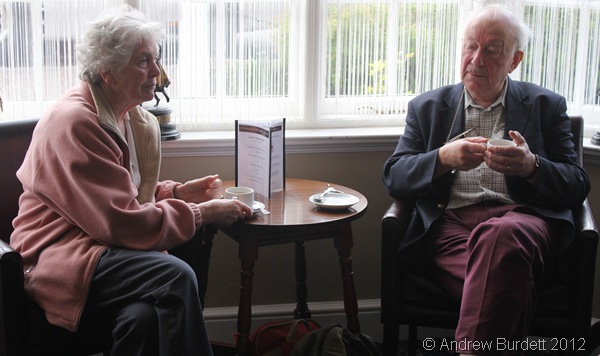 Fully refreshed, many of our party took a stroll down to the seafront for the hour before dinner. I remembered fondly the two previous occasions I’d come to the area, 2004 being the last time, when four of us (Mum had been forced to stay in Maidenhead to look after her freshly hospitalised mother) had stayed at the Cliftonville Hotel. With waves crashing over the concrete defence barrier, we stood a safe distance from the edge, though Matthew decided to ignore our warnings and was consequently soaked. I didn’t regret leaving the hotel in flip-flops, shorts, and a shirt, but Mum was chilled by the biting wind despite her anorak and gloves. 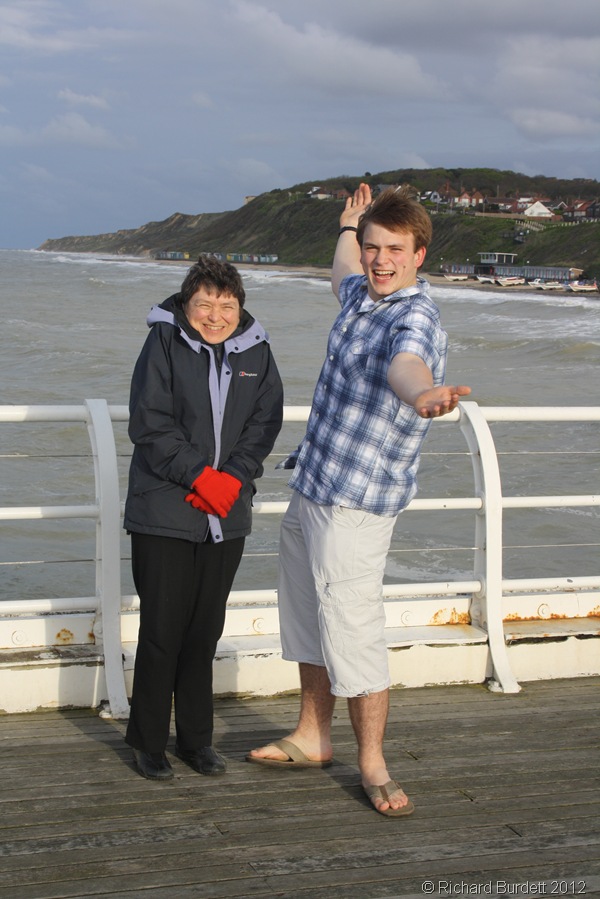 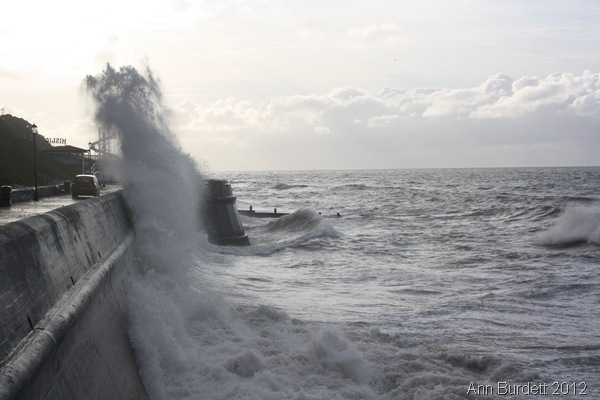 Back at the hotel, we enjoyed a splendid dinner, and I chose the delicious tomato soup starter, tasty beef main course, and indulgent cheesecake desert. It was much, much nicer than I’d expected. Over a very fruity Australian shiraz (it was the first restaurant I’d visited since turning 16 and hitting the legal age to drink wine with a meal) the laughable episode with the canopy on the ‘Magical Mystery Tour’ van earlier was told in all its glory, and comparisons were made to the church’s menfolk annually struggling to put up the gazebos on the eve of the summer fair.

The meal was followed with coffee and mint chocolates, and then I took another stroll down by the sea to photograph the reflections of the lights that lined the promenade. Though I set off alone, Mum and Dad caught me up, while Matthew headed off for the pub with Don and Ben. I then walked back and went up to my room, after a great first day. 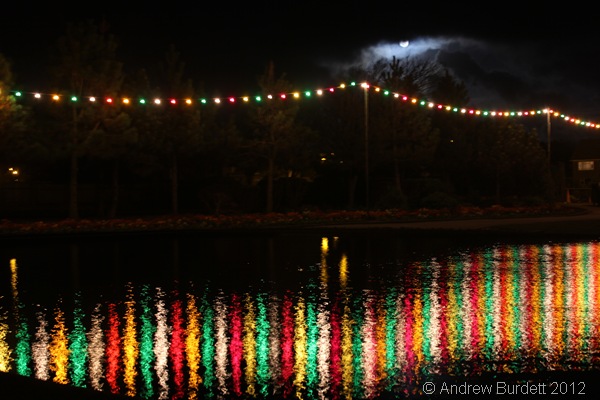