That was quite a race.

Actually, it wasn’t a race at all. After the half-way point, it was problem-after-problem, in the most exciting and dramatic (but arguably also the saddest) Boat Race in the history of the annual competition between the two top universities.

Oxford were the strong favourites to win and, as expected, charged off the start. But Cambridge didn’t let the gap between the two boats widen any more than a quarter of a length, and as the two teams went under the Hammersmith Bridge, it was (quite against the odds) suddenly becoming a very tight race. After seven minutes, working off an advantage from the corner, Cambridge had pulled into the lead: "They’ve kept alongside Oxford for so long – and now they’re starting to make it count", as a BBC commentator reported. For the next three-and-a-half minutes, it remained anyone’s guess as to who would win. 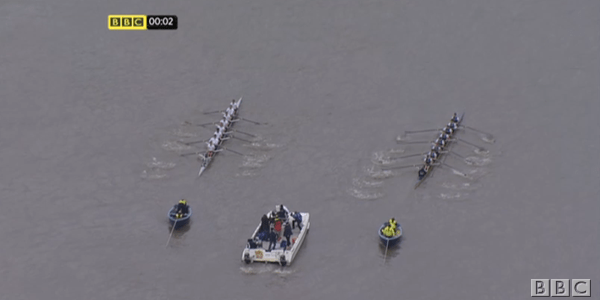 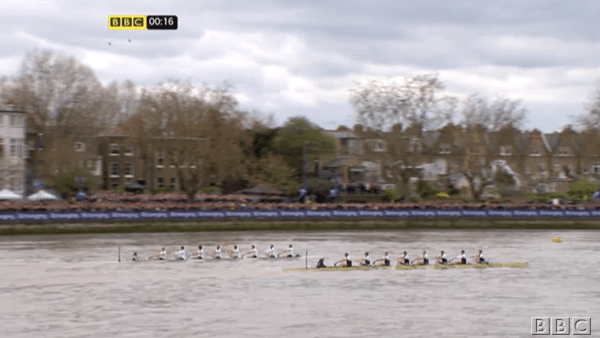 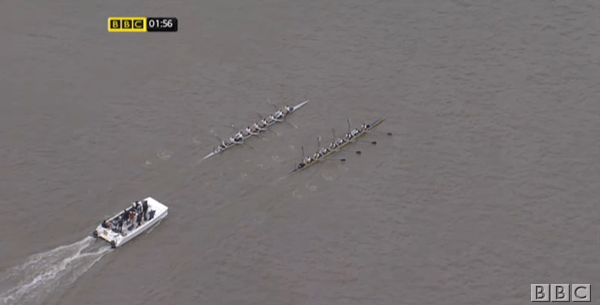 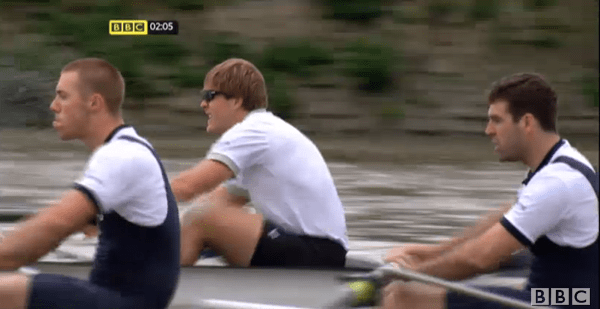 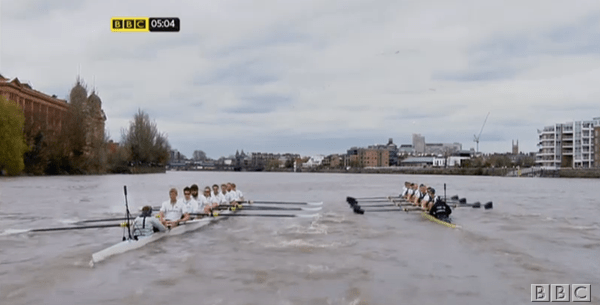 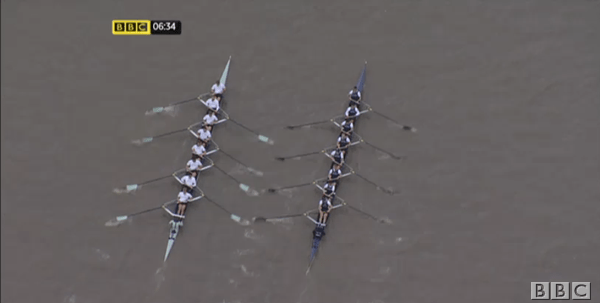 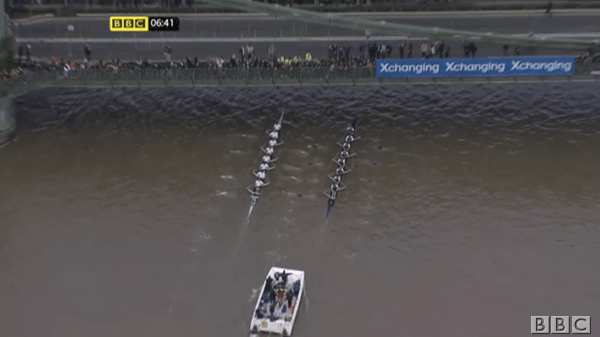 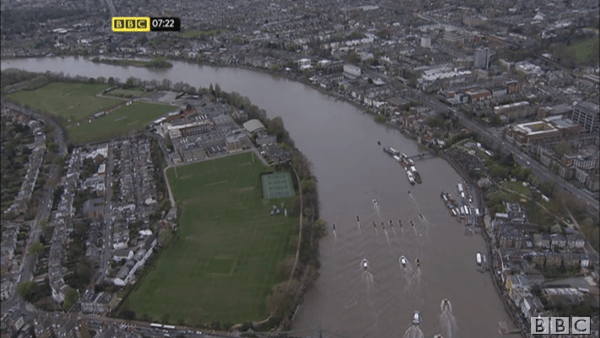 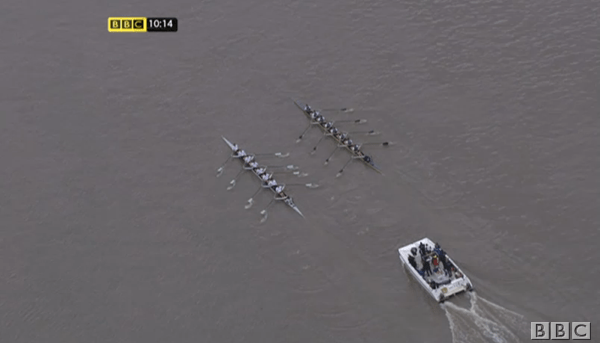 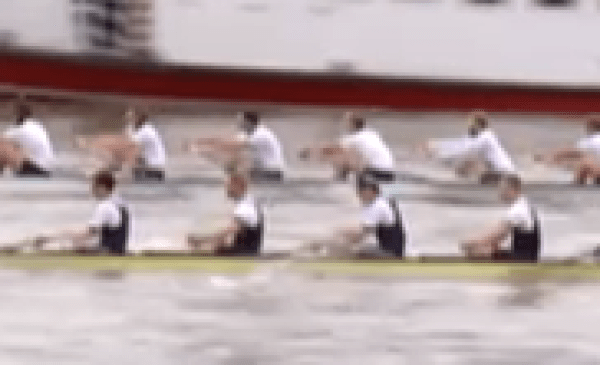 From the helicopter camera, there seemed to be something bobbing about in the water, but it was only when the microphone was thrown to Wayne Pommen, that things became more clear to TV audiences.

The swimmer was arrested by police on suspicion of a public order offence, and then jeered by those on the bank. 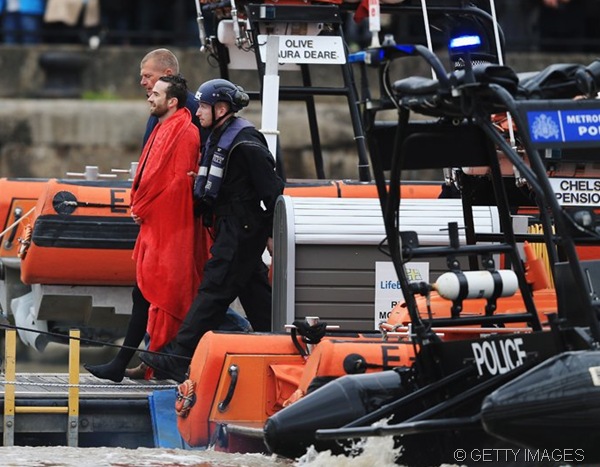 For those watching from the water-edge, there was a great deal of uncertainty. Many were checking news websites and Twitter for information, others relied on fellow spectators for details. My own sister, Harriet, was hoping for a Cambridge win as she waited at the finish-line, having joined Homerton College in October 2010, and phoned me to see what I knew about the cause of the commotion. No one believed her as she relayed the message – and I don’t think she truly did either – but it really was happening.

Rob Brydon tweeted during the race, joking the swimmer was in fact fellow comedian David Walliams, reprising his swim for Sport Relief.

"@davidwalliams has seriously mistimed this new swim of his. What an idiot. #boatrace"

Whilst no publicity was given to the protestor’s cause during the broadcast, it seems the man was Trenton Oldfield, and he was making a stand against the idea of elitism. He wrote a blog entitled Elitism Leads To Tyranny shortly before his display, in which he explains his intentions: "I am swimming into the boats in the hope I can stop them from completing the race". He failed in that. 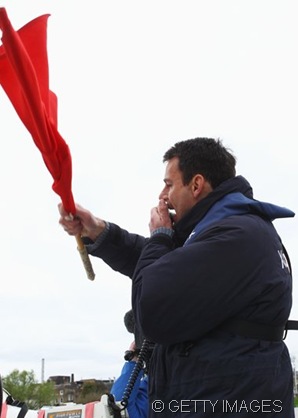 31 minutes after the competition came to that sudden halt, umpire John Garrett restarted the Boat Race. Despite the inevitable lactic acid build-up, both teams set off at a great pace. Oxford took the lead, but again they were only a quarter of a length ahead.

However, as we at home had our view distorted by a flapping white flag over the on-air camera’s lens, the biggest moment of the race had just happened: Oxford had lost an oar. The outcome of the race was decided: Cambridge would win. 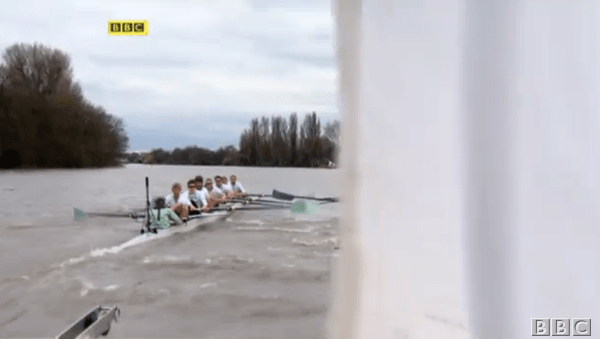 Oxford, stoically, continued rowing, but they were left in the wake of their competitor. More drama awaited them when their seven active men reached the finish line, as Dr Alexander Woods (the team’s bowman) collapsed in the boat and had to be helped ashore. The traditional post-race presentation ceremony was abandoned in light of this. Fortunately, as the BBC’s coverage came to an anti-climatic end and Clare Balding signed off, there were reports that he was sitting up again and conscious, though did require hospital treatment. Indeed, the Oxford University Boat Club president tweeted an update this evening.

"Just saw Alex in the hospital and spoke to him. He was still clutching his torn blue boat shirt. Real hero just pushed too hard #neversaydie" 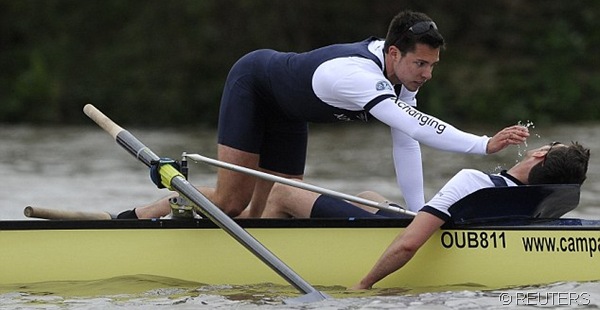 Prior to this year, this pinnacle of Oxford-Cambridge rivalry has been held on 7 April five times, won each time by the Cambridge team. Today’s "shallow" victory took that total to six, equating to an overall of 81 wins against Oxford’s 76.

But there was no real winner. For years, people will unconstructively say ‘Ah, if only…’ – but the fact is it didn’t. As the BBC’s Andrew Plant reported in his film for the evening news bulletins: "This will be remembered not for the win, but for the unique drama along the way."

The Boat Race Company Ltd (BRCL) released a statement this evening, addressing their concerns for Woods, their sadness about the interruption, and their praise for the professionalism displayed by both crews.

"First and foremost, we are delighted that the Oxford Bowman Alex Woods is in a stable condition and looks set to make a full recovery.

The Xchanging Boat Race is a British institution and an annual highlight in the sporting calendar. It is a free event enjoyed by many hundreds of thousands of Londoners and visitors, and many millions of television viewers around the world. It is very sad that the 158th Boat Race, which was heading towards a thrilling finale, was disrupted by a member of the public in a manner that risked serious injury to himself and the competing crews.

These incidents are planned for and we would like to congratulate both crews and The Race Umpire for their speed and professionalism in unfortunate circumstances as a result of which the protestor suffered no injuries."