The day began with somewhat of a rush, and despite setting my alarm with plenty of time to get washed and dressed, the ‘Snooze’ button was just too tempting. As a result, we had just half an hour for the four of us to get through the shower and to put on some threads, before breakfast at 7:30am.

The reason behind the push for time was because we would be spending a few hours at the Sachsenhausen Concentration Camp, 75 minutes away by coach. Though I’d brought my iPod dock along with me, in the event I didn’t actually get it out, partly because the majority of the rest of the group were using the time to have another forty winks, but mainly because I thought it inappropriate for us all to arrive merry and bubbly after a coach singalong to One Direction’s What Makes You Beautiful.

The memorial and former camp is spread over a large, flat site, and as we walked through the sickeningly ironic Arbeit Macht Frei iron wrought gates and assembled on the windy forecourt (Apelplatz), all of us were feeling the chill. But we were reminded that for the prisoners of the site seventy years ago, a few degrees below zero was average: it would often have been -25°C in the winter (as it was days before we arrived), and yet still the morning and evening roll-calls would take place. (The longest recorded roll-call lasted a gruelling eighteen hours.)

Few of the 200,000 who went to Sachsenhausen were sent especially to die. Of the 30,000 who didn’t make it out alive, many worked themselves to death, some threw themselves against the electric fence to end their misery, but by far and away the most were Russian Red Army soldiers. We were shown the remains of the crematorium, and the mass graves of those who were killed by the earlier method of a firing squad or hanging, though of course no-one knows how many bodies were laying beneath our feet. 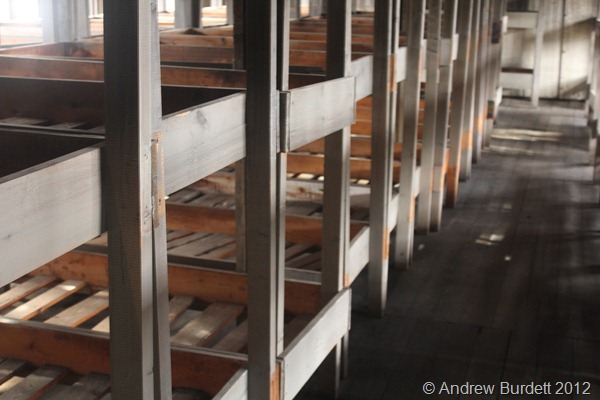 I later found out that one of the biggest things that went on at Sachsenhausen was the largest counterfeiting operation in history, Operation Bernhard. The Nazis forced inmates to produce fake banknotes, in an effort to bring down the economies of the UK and the USA. For their toils, prisoners slept in overcrowded, dirty, smelling barracks, which were rife with disease and illness, and (without heating) cold in the winter, and (with so many other bodies) swelteringly hot in the summer.

“And I know one thing more – that the Europe of the future cannot exist without commemorating all those, regardless of their nationality, who were killed at that time with complete contempt and hate, who were tortured to death, starved, gassed, incinerated, and hanged.” 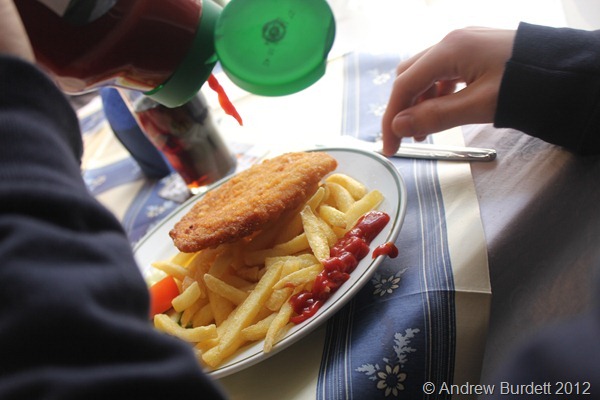 We ate lunch at the Remus Restaurant, a five-minute walk away from the camp. Though the time between the first and last plates being served was a little too long for my liking, the basic fried chicken and chips was tasty, even if the tomato and salad had a strange taste of fish. That said, I’ve eaten much, much worse, and have no real grounds for complaint.

At 1:30pm, we left the restaurant and set off on the road again, with Germany’s 20th-Century Olympic Stadium our next stop. I remember learning about the 1936 Olympics in a History lesson last year, and personally found everything about them fascinating: the optimism and then concerns of Goebbels at the world seeing what Germany was really like; the production of Olympia, a propaganda film by Leni Riefenstahl, which pioneered camera techniques now commonplace in the coverage of sport events; and the embarrassment of Hitler when the black American Jessie Owens beat an ‘Aryan‘ German. 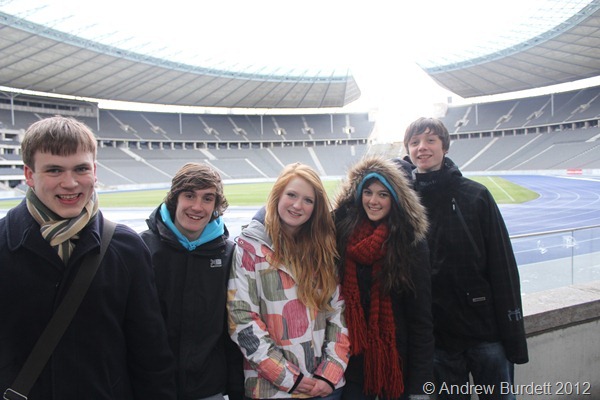 Inevitably, our look around the stadium (still frequently used for football and track events, and home to a museum and national side fan shop) concluded with a stop at another coffee shop, for those who wished to take advantage of it. Many of us were still in awe of the building –even by today’s standards it’s amazing – and took a final few minutes to take it all in, before jumping back on board the coach for one more stop. 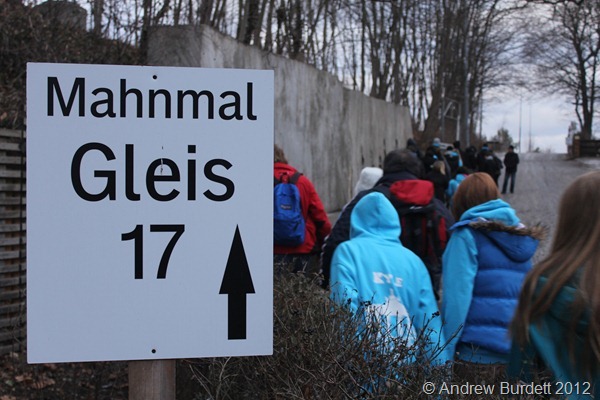 We pulled up outside a rather unremarkable path, following it up to a railway track, ginger with rust. Carriages no longer stop at the platform adjacent to it, and engines no longer pass up and down the line. At one end, tall trees are growing in the middle of the gage, while at the other, a signpost advises visitors not to walk any further due to the busy lines running parallel. “This,” tour guide Chris explained, “is Platform 17, a memorial to the Jews who here were loaded into carriages that would take them to their deaths. After a fortnight on a cramped cattle-train, feeling disoriented and lost, those who’d survived the journey would be hand-picked by the Nazi doctor, and sent to one of two lines of people: one to work, the other to die.” 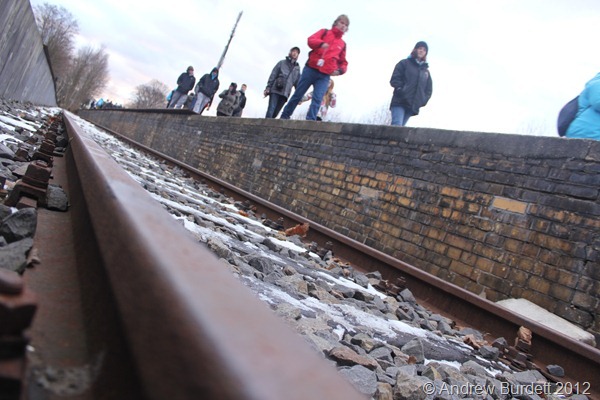 Again, for many members of the group, keeping non-steamy eyes when looking at such a memorial, to those who suffered from this brutal act, was tough. For me, of all the atrocities committed on both sides during the war, it’s the images of Jews, homosexuals, and other ‘untermenschen‘ being taken away that hits me the hardest. Unlike the museums, there’s little to actually look at, save for the data on the destinations and number of people on board each of the trains that left Platform 17 – including one statistic for a train that left for Sachsenhausen towards the final months of the war. 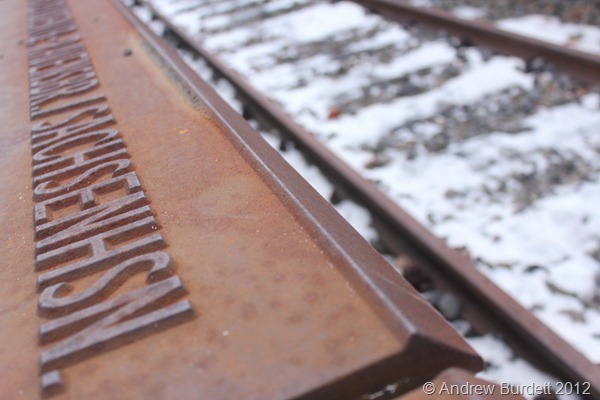 Feeling a little emotionally drained, we were driven across the city and back to the hostel, after which roughly three quarters of the group went in search of some ‘retail therapy’, while the rest of us relaxed in the rooms and in the lounge. We were able to collect dinner from 7:00pm onwards, and it was at this stage when we started to talk about small gifts for the trip leaders. Zeki and Huw told us that they’d already bought a card, leaving Lorna, Sophie, and I to encourage everyone to sign the card when the boys went round with it later and to contribute to the ‘public subscription’ pot for the presents.

At 7:30pm, we met in the foyer and then walked the short distance to the Reichstag – the home of the German government. What we saw was, of course, not quite what Hitler would have seen – after a mysterious arson attack that brought down the building (the Nazis famously blamed the fire on the Communists, giving them reason to arrest and lock away their political enemies as ‘plotters’ and ‘conspirators’), the shell stood derelict for years, just on the Eastern side of the Berlin Wall during the latter half of the 20th-Century, until it was rebuilt under the reunification process. Nowadays, one can visit the glass dome at the top but, like other such attractions across the world, has to apparently be security-checked weeks before entry. 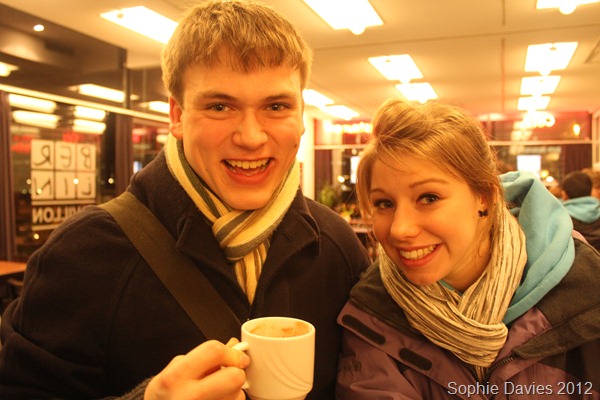 Out of trip funds, we were all treated to a hot drink from the nearby cafe, and then stopped for a group photograph in front of the world-famous facade. 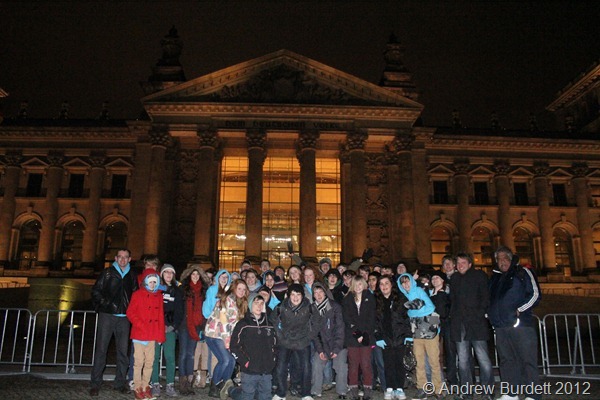 Returning to the hostel, we all knew the challenge ahead: packing as much as possible, as quickly as possible, so as to allow as speedy a check-out as possible in the morning the following day. However, due to my haste, I forgot that one of the odd-looking table/stool/footrest objects made of plywood had cracked slightly prior to our arrival. Therefore, when I happened to lean on it to support myself, as I unplugged my mobile phone charger from the wall socket just above the skirting board, it snapped completely. In hysterics, we decided to not tell the teachers – who were, understandably, extremely stressed already – until the morning, especially as they’d already had to come and tell our room to quieten down on more than one occasion. And so, at 10:30pm, we lay down for our last sleep in Berlin. 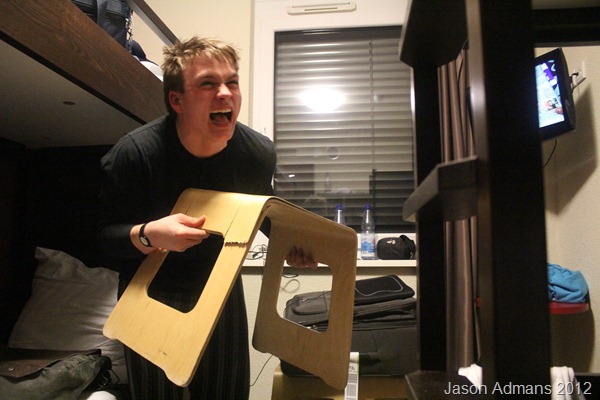