Despite last night putting my headphones in and setting my iPod to run its ‘Bell Tower’ alarm clock function at 6:30am this morning, I was somewhat surprised to hear the distant sound of church bells at half-past-the-hour. I soon realised, however, that my Skullcandys had fallen out of my ears during turning in bed, and the distant sound was in fact originating from the device. 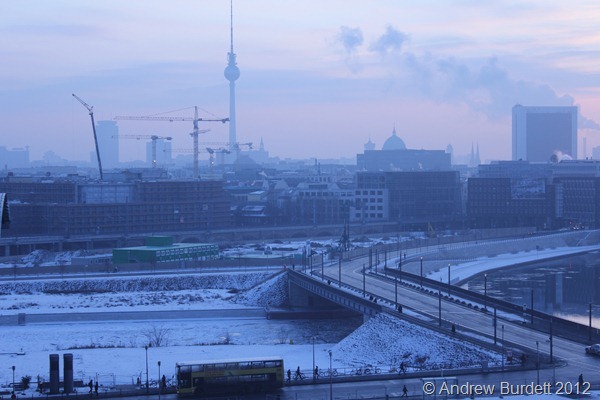 I was one of only a few who’d chosen to get up early and, accompanied by Mr Boniface, “watch the sun rise”. Feeling like Willie Wonka in Roald Dahl’s Charlie and the Great Glass Elevator, we pushed the button in the lift marked ‘Rooftop’ and ascended to the top of the building again, as we’d done yesterday evening. There were no golden rays – we were too early – so I took a simple picture of the skyline and went downstairs. 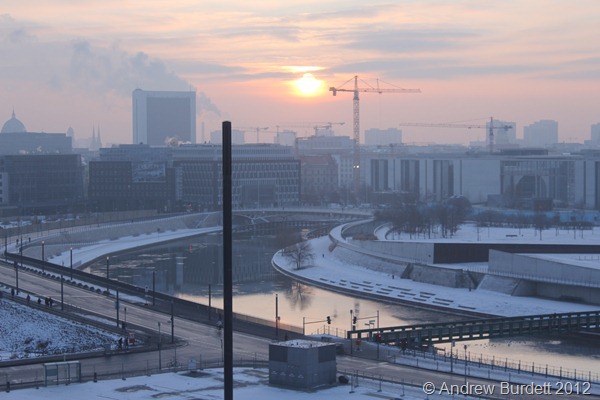 The other members of my dorm were still laying in bed, as our designated time to collect cereals, cold meat, and bread from the self-service breakfast room was not for an hour. I filled the time with a little homework, which I’d taken with me to make up for the half-term revision time I would be missing, before heading up to the rooftop once again as the sun had made it over the horizon by this point. 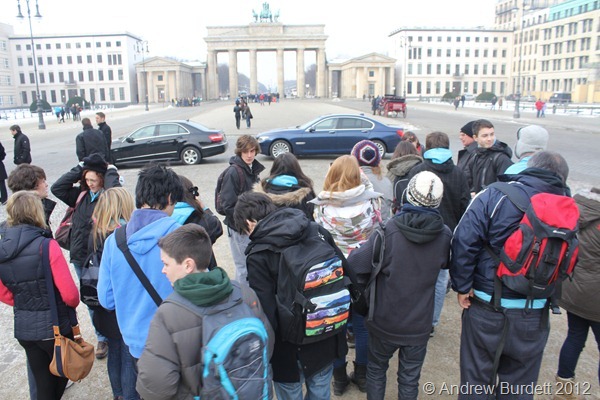 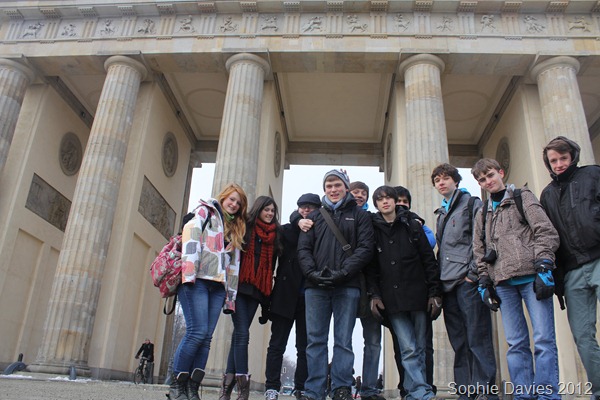 At 9:30am, we congregated in the entrance foyer downstairs and, all wearing multiple layers in preparation for the sub-zero temperatures outside as we’d been advised (I say ‘all’, but Daniel had somehow managed to fail to wear his coat), we began to get rather hot in the warmth of the reception area. But we soon cooled down on walking outside, and after taking the short underground train to Brandenburger Tor station, we walked out in front of the Brandenburg Gate at 10:00am. It’s an expensive area, home to Berlin’s apparently most expensive hotel, Hotel Adlon, which is where the late Michael Jackson infamously once dangled his child out over the balcony. The area contains a number of embassies, including that of the United States, with its flag proudly flying behind the two security guards. Think of a rather bizarre cross between Kensington and the South Bank: the main square is littered with human statues and Berlin Bear costumed mascots (happy to be cuddled for a photograph, in return for several euros), but behind them, clean stonework reflecting on the reflective black bonnets of the Mercedes-Benz taxis awaiting their rich and famous customers. The gate itself was built in 1891, in neoclassical style, and is now probably the defining landmark of Germany. When the French leader Napoleon saw the chariot sculpture on the top, he ordered it to be seized by his soldiers, but was returned after English and Prussian forces won the Battle of Waterloo. 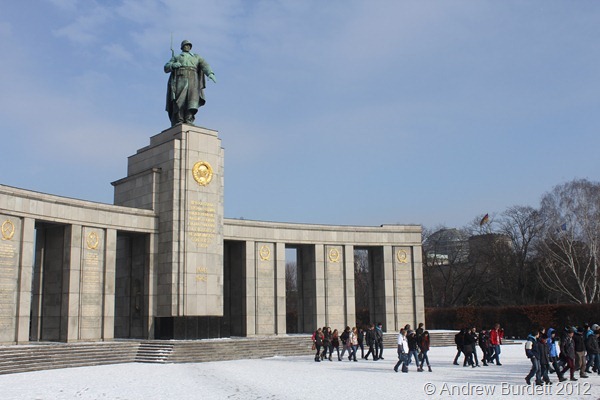 With Starbucks in hand, we continued walking in the groups, soon arriving at a Soviet memorial in Tiergarten Park to fallen Russian soldiers. Interestingly, the dates marked are ‘1941’ and ‘1945’: the years between which the Red Army were fighting on the side of the Allies. Parts of the marble and stone used to construct the impressive monument were in fact taken from the headquarters of the Third Reich, the New Reich Chancellery. The information board points out: “Using these materials helped Soviet architects not only to solve a supply problem but to vividly underscore the end of the Nationalist Socialist regime.” What’s more, there’s a an aerial photograph of the memorial soon after completion, standing amid a desolate surrounding.

After crossing the Unter Den Linden, the next memorial we came to was, at first glance, a simplistic-looking black box. But peering through the small glass window revealed the projection of a looping video, which was showing homosexual people embracing and kissing. It was clear that this was in memory of the gay people who are shockingly an often forgotten part of the Holocaust. 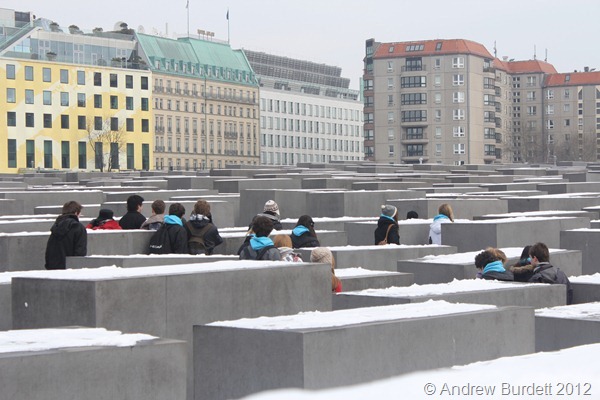 But it was a fraction of the size of the Jewish memorial site over the road, made up of a vast number of grey blocks. There’s 2,711 in total, actually, an arbitrary number representing the unknown number of Jews who died as a result of the actions of the Nazis (though it’s commonly estimated to have been over 6 million). From the street, the 19,000m2 square is incredible, but it’s on looking more closely that one can appreciate each individual block. Each is a different height (representing the many individuals that make up the incomprehensibly large figure), with the gaps that separate the neat rows of semi-uniformity blending seamlessly between being a pathway or a corridor, as the blocks vary in depth as one walks through the ‘Field of Steale’. Designed by Peter Eisenman, construction took two years, beginning on 1 April 2003 and opening to the public on 12 May 2005. 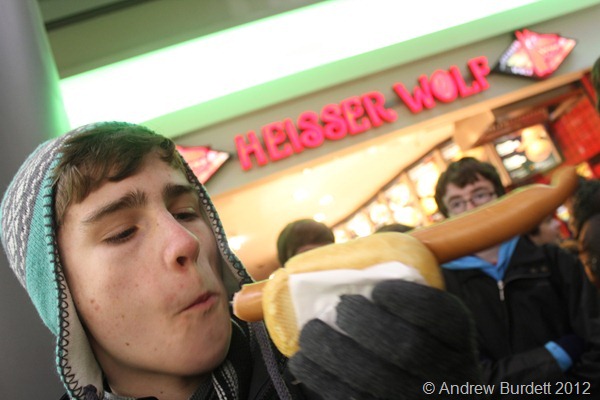 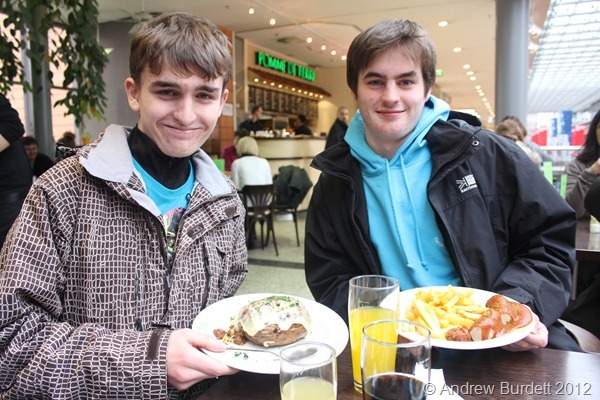 Once at a busy shopping centre we were, like yesterday, given an hour to find and buy ourselves lunch. Jason, Will, and I took a seat at the Pomme De Terre, a restaurant on the top floor which, as its name suggests, serves all of its meals with potato sides. While my friends both went for the Currywurst with chips, I enjoyed a baked potato with chilli con carney filling. We paid the bill just minutes before having to meet at the other end and bottom floor of the complex, so had to run the last few metres to avoid the embarrassment of being late. 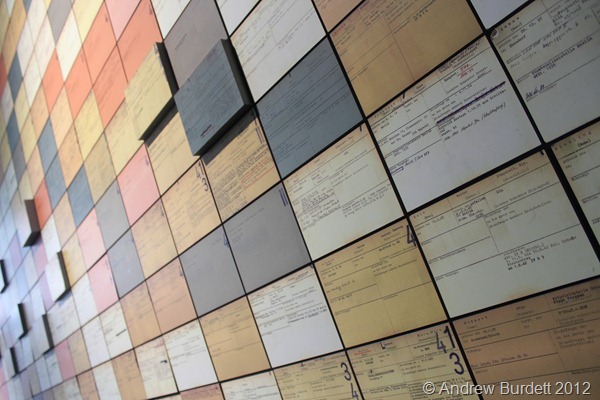 In the afternoon, we spent half an hour in the fascinating Topography Des Terrors museum, which is built on the site where the Gestapo’s interrogations centre once stood. The modern museum is devoted to the fear the Nazis struck into their people, and the consequences for those who failed to obey. 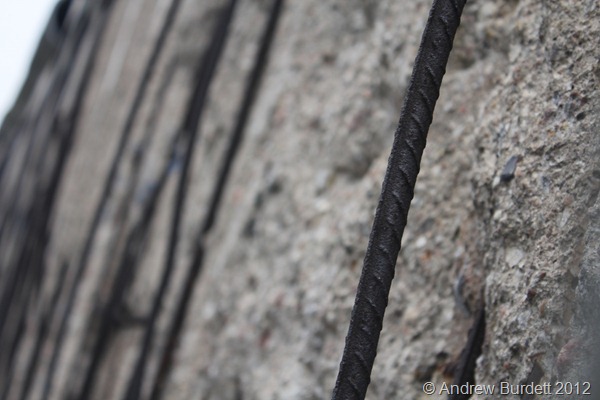 Our walking tour continued as we moved on to a later stage in history, the Cold War. For the Year 10s on the trip, who so far as I am aware haven’t yet completed their studies on Germany prior to the Second World War, I imagine this blurring of time period may be of confusion. But all understood the significance of the section of the Berlin Wall we saw, and many stopped to photograph it. 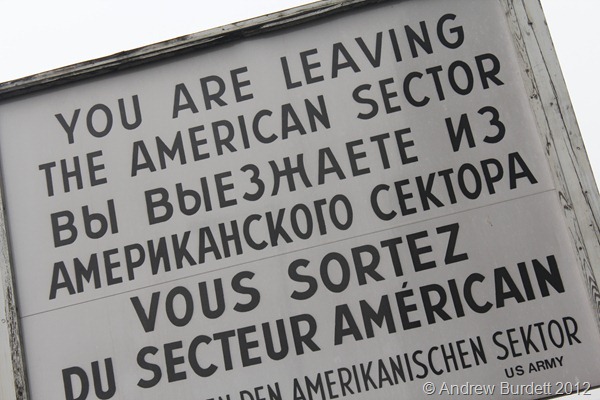 We arrived at the Checkpoint Charlie Museum in relatively short time. Outside, two men (also ready to smile for cameras in exchange for a few euros) are dressed as US soldier, ‘guarding’ the white booth branded ‘US Army Checkpoint’ in the middle of the road. Mr Shire commented on the surprising lack of road safety displayed by some fellow tourists, but also the poor planning by road landscapers who must’ve been oblivious to the fact people would want pictures from the middle of the road.

The museum was much less minimalist than the previous one; much more higgledy-piggledy, all-over-the-place and cluttered. However, it was of equal (if not greater) interest, thanks to its wider range of artefacts (including the supposedly original ‘You are now leaving the American sector’ sign, and ingenious devices used by people to try, not always successfully, to escape from East Berlin to West). 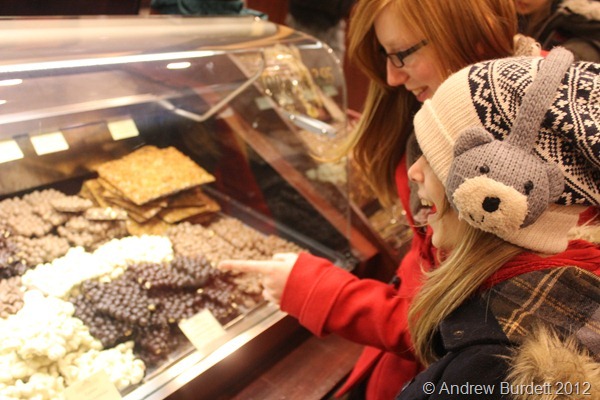 After browsing the museum, we crossed the road where, once again, we indulged in hot drinks and pastries, before walking back to the station. En-route, we stopped at an exclusive chocolatier’s shop called Fassbender & Rausch and looked at the German landmarks recreated in chocolate on display in their windows (though in fact, the ‘Do Not Touch’ signs were just to fool us – the ‘sculptures’ were in fact, of course, made out of plastic). Nearer to the train station, we also passed a flagship Volkswagon dealership, where a Bugatti Veyron was on display. 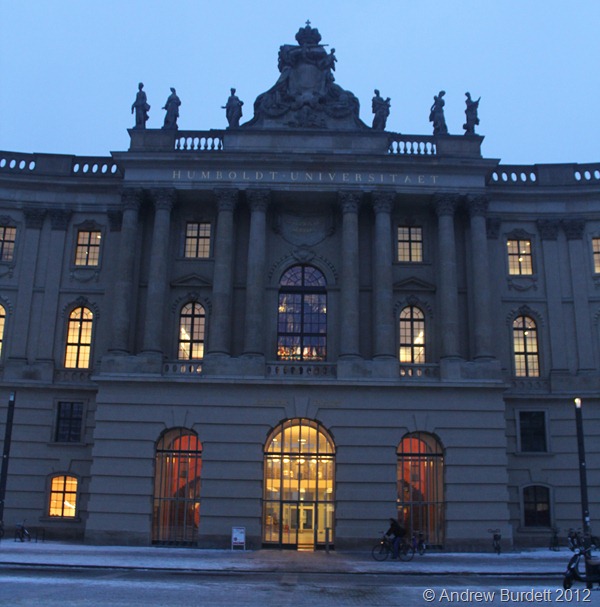 The final thing pointed out to us was the Bebelplatz where, in 1933, members of the SS, SA, Nazi students, and Hitler Youth burnt over 20,000 ‘anti-German’ books, including All Quiet On The Western Front. A simple memorial of a glass square on the floor, looking down onto empty bookshelves commemorates this event, alongside a prophesising quote from Heinrich Heine: “Dort, wo man Bücher verbrennt, verbrennt man am Ende auch Menschen” (“Where they burn books, they ultimately burn people”). 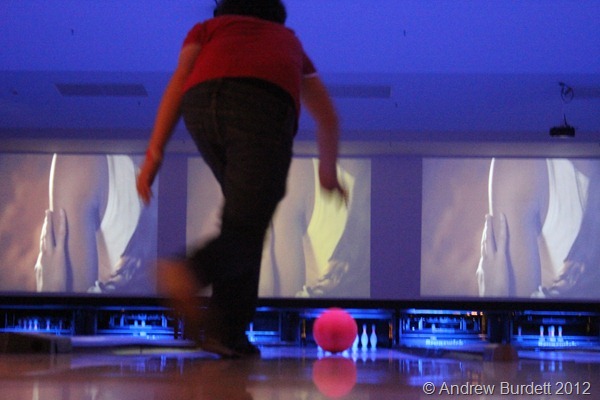 After dinner, we enjoyed an hour of bowling back in the heart of the city, where I won against my lane. It’d been another great day, noticeably more sobering than yesterday, but tomorrow’s visit to Sachsenhausen (a concentration camp) will be yet more sad.