To maximise on German daylight, the trip began with an early start. For me, somebody famed for late nights and early mornings, I wasn’t quite sure what to do about the agreed 3:55am meeting time; a time earlier than I’ve gone to bed at on more than one occasion, but surely too late to simply not sleep. In the end, I managed to get about four hours’ kip, but after a cup of coffee when I woke up, I was bright and alert, ready for school’s four-day trip to Berlin.

I was a little surprised by the gullibility of some of my fellow GCSE German and History students. For example, I convinced my friend and Year 10 pupil Sarah Robbins that the coach which took us to Terminal 5 was to be loaded up onto a cargo plane and would meet us in the German capital city. That said, nobody was convinced by my suggestion that one had to pay a bus fare for the shuttle from the Air Gate to the plane. 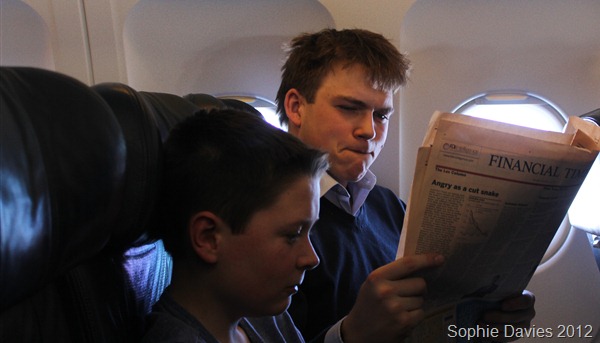 At about 7:20am, the Airbus A319 (which was also carrying John Hurt in addition to business-workers and our party) left the runway at Heathrow, and began its 90 minute flight to Tegel. En-route, I enjoyed reading the day’s i, Financial Times, and Daily Mail, feeling suitably erudite in my long-sleeved blue shirt and navy jumper. 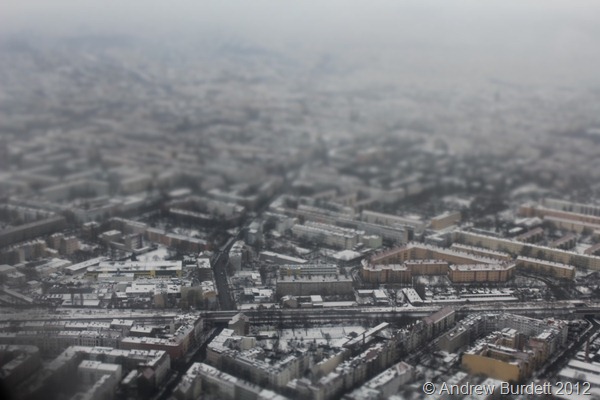 Flying in over Berlin, the landscape was much the same as that that we’d left behind: white blankets covering the surrounding fields, connected by the harshly contrasting black of the snow-cleared roads.

There was a fairly lengthy wait between stepping off the plane and collecting our luggage. Such is the small scale of Tegel Airport, that we could watch our bags being taken off the aircraft from a window metres away. And, unlike Heathrow, where one seems to walk miles through long, bland metallic-coloured corridors in a bid to locate the baggage conveyor belt, here, we simply stepped off our flight and lingered by the end of the walkway.

A rather smart coach took us through the rather shabby and dog-eared industrial zone that encompasses the airport, before arriving at the Meininger youth hostel that would be our home for the next three nights. As we approached the shiny, glass facade of the vast building, we were sure our every wish would be catered for. Sadly, we soon realised that the hostel was in fact the adjacent concrete tower block. Worse still, half of the rooms hadn’t yet been readied. But no matter, for we were merely dumping our bags ahead of an afternoon walking tour of the city. That said, I didn’t want to carry my netbook all the way around with me, neither did I want to leave it lying around in the rooms where security would be poor during the continuing cleaning. I’d noticed some compartments under the beds which appeared to have the ability to be padlocked, so I ran down the six flight of stairs to reception and inquired – in my mother tongue – where I may be able to purchase such a padlock. The lady spoke little English but pointed to the food and drink vending machine where, in addition to the usual cans of Coke and bags of crisps, there was indeed a selection of padlocks. After feeding the machine €4, I cut the protective plastic away, took the padlock upstairs, and placed my netbook in the drawer. With the rest of the party downstairs getting nearer and nearer to being ready to go, I knew I didn’t have time to waste. But the lock in my drawer just wouldn’t turn, so I had to try another drawer which, with a great deal of effort, finally slid into the locked position. I padlocked it secure, then ran back down the stairs, ready to go.

Our first stop was to the nearby train station I mentioned earlier. Our guide, supplied by the tour company, explained that it was built for the 2006 World Cup, and has multiple levels for internal, national, and international trains. We were given half an hour to find ourselves some food: being play-it-safe Brits, the majority of us simply headed for the row of global fast food chains (Burger King and Pizza Hut being the most popular). But, some of the braver amongst the group, including my History teacher and leader of my walking group, Mr Shire, tried the Currywurst – a sausage draped in curry sauce.

We hopped on the U-Bahn (like the London Overground) for one stop, which took us to an area of the city filled with monuments and grand buildings. One such building was Bellevue, the equivalent of Buckingham Palace where President Wulff resides, though he wasn’t in when we passed. We continued walking on through one of Berlin’s parks, past the Berlin Zoo, and alongside the frozen river, eventually ending up in a shopping district. Before being allowed to go off on our own, we were taken into the Kaiser Wilhelm Memorial Church with beautiful blue stained-glass tiles, which formed an abstract background for the suspended gold-coloured figure of Christ above the altar. 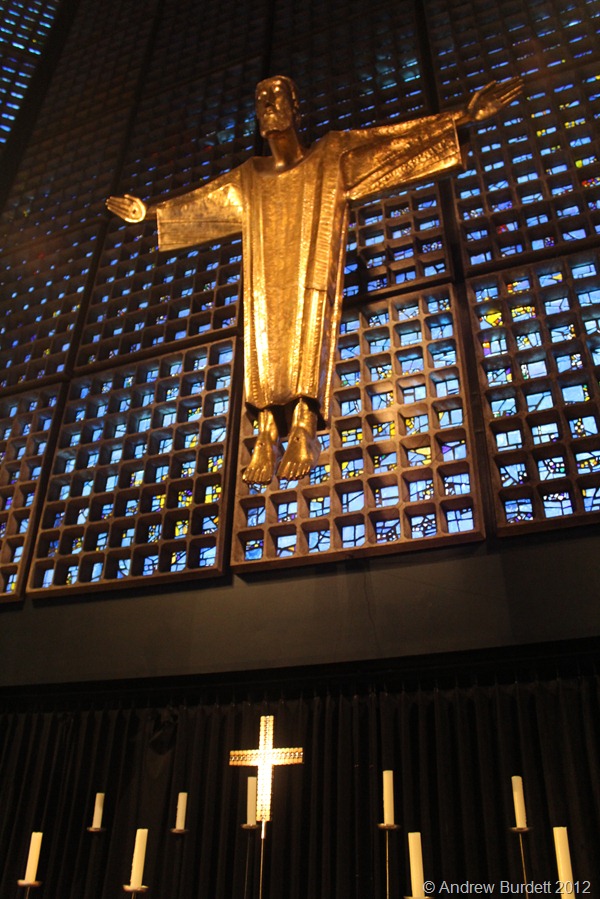 We all headed to the McCafe, where the majority of us bought hot drinks and cakes, before heading back to the hostel to settle in. I was somewhat surprised by the lack of security precautions by the giant glass window; unlike in England, where it seems every hotel window opens a mere few centimetres (if at all), this three-foot-squared sheet of glass was easy to swing right open. It did, however, offer a great opportunity for some long-exposure shots of the city (rivalled only by the view from the top of the building, which we looked at after dinner). 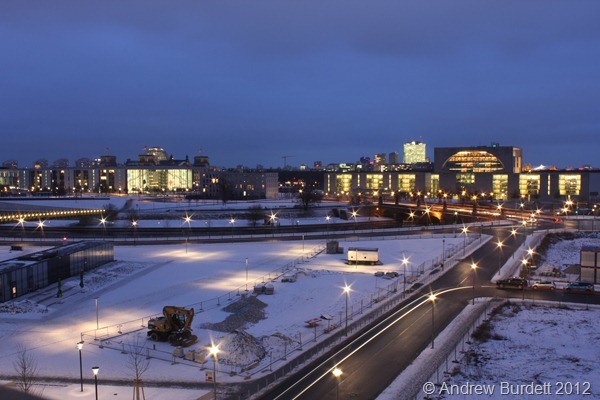 Supper was a better-than-expected affair, with a chicken and mushroom sauce complementing the rice, and it refilled our bellies after a long day.