Shutting Up Shop: The End of Little Shop of Horrors – 9 February 2012

Shortly before the curtain-call for Furze Platt’s production of Little Shop of Horrors before half-term, cast member Andrew Burdett described the experience of playing Orin. 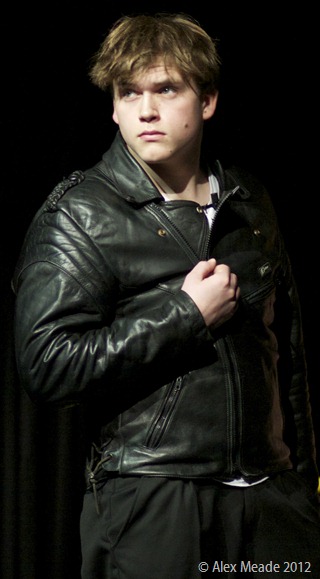 Here in the school Dance Studio (acting as a green room for this production) there’s a hushed excitement as my fellow cast members prepare to perform each of the scenes they’re in for the last time. For me, it’s already almost over: I’ve sung my last note as Orin (the sadist dentist) and ‘died’ for the very last time (now there’s a phrase you don’t often read). Aside from the curtain-call, strike, and after-show party, six months of preparations for Little Shop of Horrors have come to an end.

Musicals are great fun to be involved with: there’s so much to do, especially in the last days of the rehearsals, that there’s always a great collaborative feeling as everyone and everything finally comes together. It’s not just the acting and singing. There’s lights to wire in, microphones to set up, and musical instruments to tune.

There’s genuinely no feeling quite like that of when one takes one’s final bow. It’s partly a feeling of relief (a delight that the audience enjoyed it, after all of the rehearsals), but there’s also quite a strong sense of sadness (it’s the end of a great show, something we’ve worked on for months). I remember fondly when I was the lead in HONK! (the 2010 lower-school musical). The audience were on their feet, cheering loudly as I walked proudly on stage for the last time. No doubt Mark, Tilly, and Ryan (Seymour, Audrey, and Mushnik respectively) will have a similar reception shortly, as will the rest of the cast and crew. Any regrets? Yes, inevitably I’ve got one or two. I regret not learning my lines as early as I really ought to have done. I regret not completing the schoolwork I was missing (through necessary absenteeism from lessons) during spare moments of rehearsals, and instead leaving it all to do at home. But, actually, what I don’t regret is the fun we’ve had in putting together Little Shop. Aside from the kind tweets, texts, emails, and face-to-face comments I’ve received from satisfied audience members after each show, what’s really made the whole thing worthwhile is the laughs we’ve had along the way; the snowball fight on the field on the day of the Sunday rehearsal; and, more than anything else, the friendships I’ve formed in the last few months. My friend Sophie Davies (who’s one of the singing girls) wrote in the February edition of the school newsletter about how special it’s been to perform in the wonderful new drama studio. Its technical facilities are undoubtedly brilliant, and whilst it lacks the ability to seat as many audience members as the Main Hall does (we’ve had to do four nights instead of the traditional three, and even still we sold out), it’s given the show a much more intimate feel. For audience members, my act as the terrifying tooth-yanker has felt all too close for comfort. And the giant Audrey II plant – controlled by four puppeteers – has worryingly appeared to be within touching distance of those on the front row. There’s been some issues with the space (without raked seating, the sight-lines are awful if you’re sat behind a tall person), but overall it’s been a pleasure to be one of the first to tread the linoleum ‘boards’ of Furze Platt’s new studio theatre.

Photographs in this gallery of production pictures were taken by myself and my friend Alex Meade. His pictures are published with permission. Photographs are copyright their respective owners. 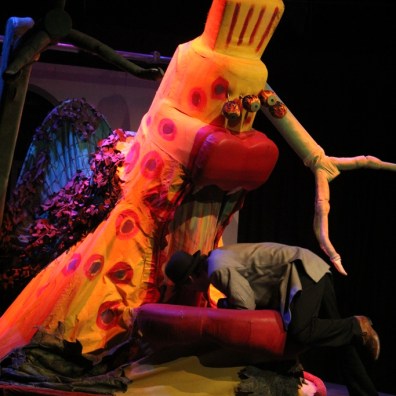 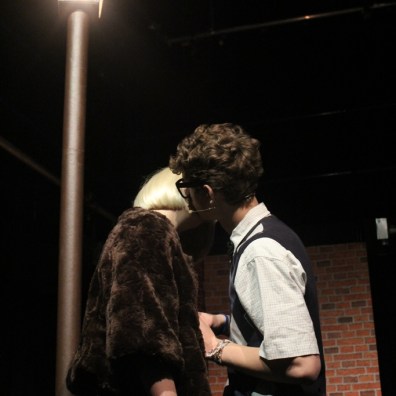 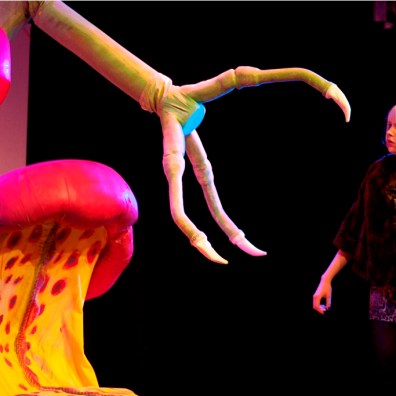 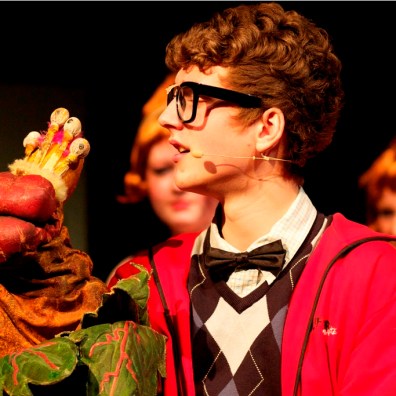