So here we are at the end of the first full week of 2012. This Review of the Week idea is to become a weekly feature, incorporating but replacing the Photo of the Week style of blogs that ran during the middle of last year.

The nation and the world has been gripped by the verdict of the Stephen Lawrence Inquiry, which has found Gary Dobson and David Norris guilty of the racist murder of the black teenager 18 years ago, thanks to the presence of new evidence. Other news this week includes the discovery of a murdered woman on the Sandringham estate; FrankTwitchy’s video of his dancing granny going viral; and the London 2012 Olympics ticket website breaking – again. For me, it’s been a pretty quiet week, returning to school on Tuesday after the festive period, but with a fairly pointless school trip to the Science Museum on Thursday. Due to my attendance of Taplow Youth Choir, I was only able to swim once at the Lions Club’s 27th annual Swimarathon yesterday (Saturday), contributing towards the 56 50-metre laps my Explorer Scout unit racked up. I managed to raise some decent funds, which will be split jointly between the Lions Club’s charities and the Unit.

This week’s Photo of the Week comes from our 2011 Christmas Lights which will be taken down tomorrow. Before the ‘demolition’ can begin, though, I ensured I had some good pictures of them. Though there’s many, this one I singled out because it obviously shows a general view, from the audience perspective, of Dad’s great show – described by regulars as "the best yet"! 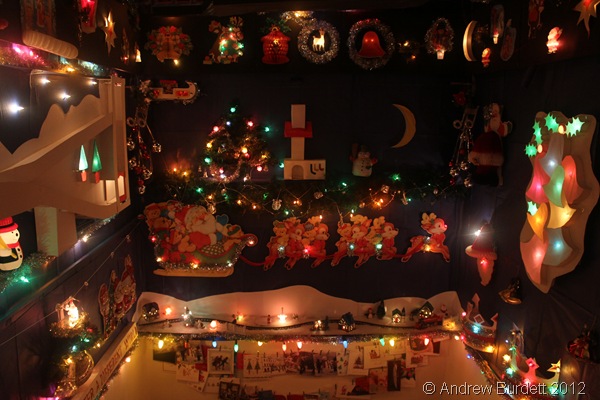 "As a 16-year-old, painting rap music stars and political icons onto T-shirts for extra pocket money, Stephen Lawrence could never have imagined his own face would one day be as instantly recognisable as his heroes’.

For his family, the tragedy of the bright and ambitious teenager is that he become a household name not for his own achievements but for the manner of his death."

This week’s official Number One is Good Feeling by American rapper Flo Rida. "Darren Jones wants to check himself into rehab – to cure a bizarre addiction to Diet Cola. Darren, 38, knocks back 42 litres of the drink every week. Now the 35 stone father of two is vowing to get treatment for his £100 a week habit to get fit again and save his relationship with 33-year old mother of two Paula Mullen."