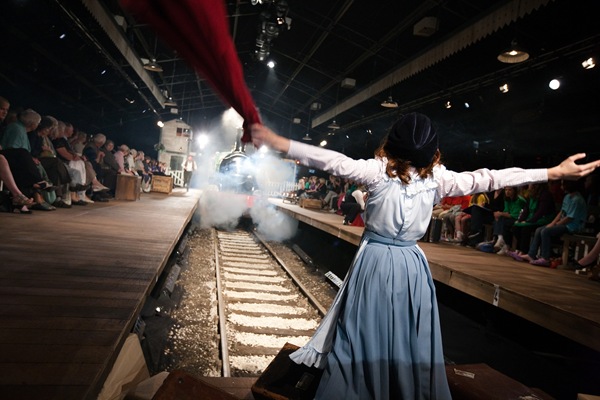 In 2007, Eurostar passengers arriving from France, Lille, and Brussels stepped onto the platform of King’s Cross for the first time, after international travel left Waterloo Station forever, leaving the former home of Eurostar with five dormant platforms. However, last year, two of those platforms were converted into a theatre for a stage version of the greatest train story of all time: The Railway Children. It’s a truly magical idea, to set such a well-loved tale in a real station, and therefore allow the appearance of a real steam engine.

The show’s due to close on 8 January, despite rumours of another season starting on 6 June, but as it’s so expensive, Mum bought tickets for just Matthew, Harriet, and me, while she, Dad, and one of her friends found a voucher to see the production of The Nutcracker at the O2 at reduced ticket prices.

"If you want a reasonable, upfront view [for a family of four], you won’t get any change out of £200… Mind you… what’s a couple of hundred quid in the golden age of rip-off rail travel? That doesn’t even buy you an East Coast Main Line Anytime Return to York, and at least here you’re guaranteed a seat."

The first thing that strikes you as you walk through the old Eurostar Terminus is how worn the whole place looks: the carpet is filthy, the old departure screens (CRT, of course) are dusty, and the JCDeceux advertising boards are fading. Look closely, and you’ll seen remnants of WHSmith branding in the retail unit now being used to flog Hornby track and books about the making of the original film. A hideously pixelated image of Castle Howard adorns the wall of the hideously over-priced bar, but my complaints ceased on entering the theatre. 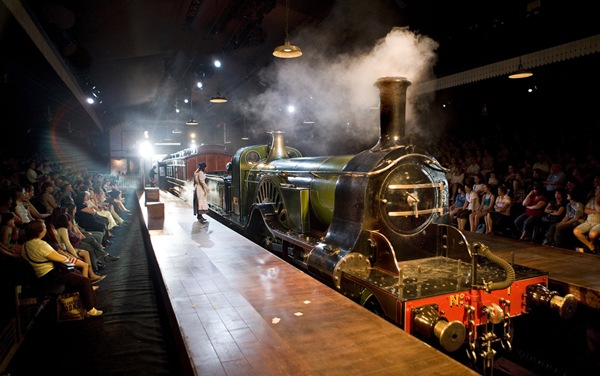 The ‘stage’ is the set in the centre of a traverse auditorium, where the various sets are ingeniously brought on and off on rail trucks, reconfigured in the wings to be a kitchen, a living room, or the inside of a railway carriage, before being pushed back on by a number of boiler suit-clad stagehands. The script, penned by Mike Kenny, is hugely narrative with the elder version of the three children each taking it in turns to tell parts of the story, as they look back on their childhood and "when we became ‘the railway children’". I was somewhat disappointed not by the frequent breaking of the fourth wall, but rather the consequent effect of lowering parts of the performance to more of a pantomime – the patronising explanation "For this part, we need you to use your imagination" was unnecessary, while repeated calls for the audience to wave as the trains came in were a little tiring, though did have the surprise effect of making me realise that 100 per cent of the audience members whom I was facing were white. 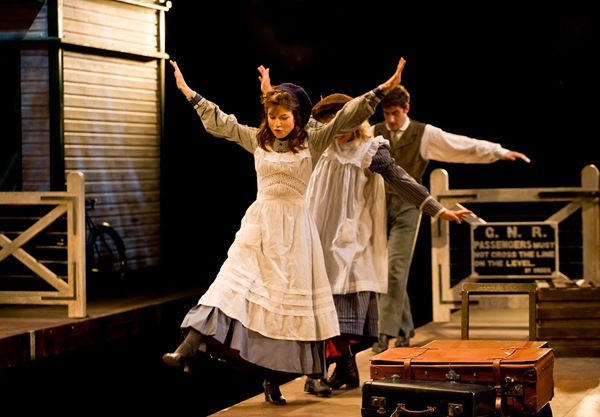 The tears shed by characters at various stages of the performance were totally unbelievable, and they all came across as very school-playish – a shame, given the deep theme of how the mother’s ‘stiff upper lip’ makes the situation worse. But there were a wealth of wonderful pieces of direction, not least the moment when the boy in the red jersey broke his leg under the railway bridge. The bridge was symbolised by two pieces of gauze being pulled in front of the audience, and a single spotlight (positioned adjacent to the lamp that they brought with them) illuminated the action behind the darkened tunnel wall (sheets).

The sound design is excellent, the lighting is rather good too, and the creativity in the staging is ingenious. While it misses out on the fifth star due to the previously mentioned unnecessary use of pantomimic techniques, I loved the performance – just like the 1970 film, Matthew, Harriet, and I were all watching through misty eyes at the end, as the steam clears, the gentleman walks down the platform, and Bobby realises who it is: "Oh my daddy, my daddy".

The Railway Children runs until 8 January 2012 at Waterloo Station.