When I saw a film called Nativity on the BBC iPlayer earlier today, I sat down to watch it on our internet-connected television in the living room. One by one, the rest of the family joined me in watching this hilarious, 2009 movie.

The plot for Nativity! is, to say the least, basic, with two rival schools competing for a five-star review of their Christmas nativity play in the local paper. But despite the pretty inevitable ending, the film’s not boring – it’s much quicker to get going than Son Of Rambow (another film aired on the Beeb this Christmas), for example, and much funnier too. The film begins with three drama students – Paul Maddens (Martin Freeman), his girlfriend Jennifer Lore (Ashley Jensen), and their friend Gordon Shakespeare (Jason Watkins) – dressed as elves, waiting in the wings for the Midlands Academy of Dramatic Art Christmas production. Fed up, they briefly describe their plans for the future, with Lore hoping to go into producing, and Maddens hoping to teach, met by an unimpressed look from his two co-stars: "Those who can’t act, teach," they say, "and those who can’t teach, teach primary." 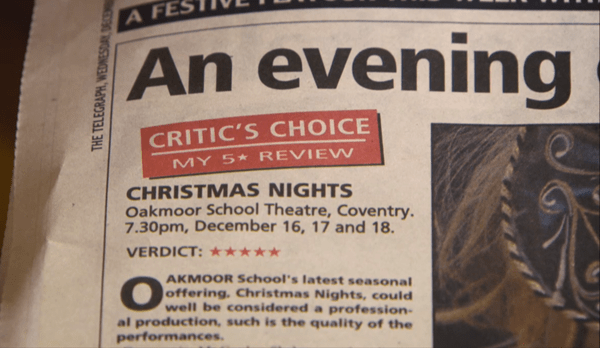 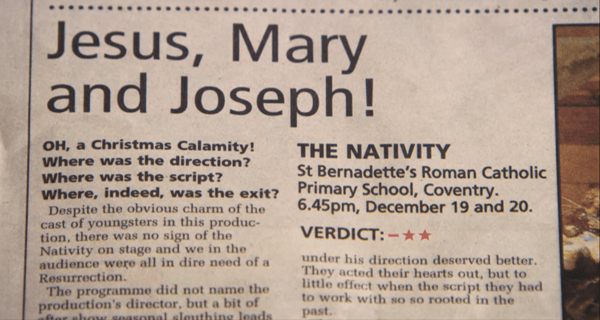 As it turns out, Paul does become a primary school teacher, and Jennifer leaves him to move to Hollywood to pursue her producing dreams. Shakespeare also becomes a primary teacher, working at "the best private school in the city", where he staged a Christmas nativity far better than Maddens’ own show – winning the former a five-star review, while the latter gains a negative review, refuses to ever stage another, and grows to hate Christmas. The story picks up five years later, with Paul being arm-twisted into doing one last nativity for the outgoing headmistress. Things get worse for the struggling primary school teacher as he is joined by Desmond Poppy (Mark Wotton), a classroom assistant who behaves worse than the children. However, eventually, they agree to co-write St Bernadette’s School’s nativity production. Maddens bumps into his rival, Shakespeare, as the latter is preparing for his own show. Idly, he lies that his ex-girlfriend Jennifer is coming to watch the show with her Hollywood colleagues, planning to make a film "and a book" out of the show. Predictably, this lie leaks and escalates, filling the pupils of St Bernadette’s with false excitement.

Sequences showing rehearsals for the two plays are beautifully crafted, and just as Outnumbered and Rev are easily relatable, this too brings back fond memories of my early childhood education. That said, I was never taken on a field-trip to see a baby being born, nor did I steal pigs, lambs, and donkeys from a farm to use in the Christmas production.

I’m a fan of a large amount of Freeman’s past performances (John in Love Actually, Tim Canterbury in The Office, the Met Sergeant in Hot Fuzz, and more recently Dr John Watson in the brilliant Sherlock), and his character depiction does not lull in this film. Mark Wotton’s character of the friendly, likeable-but-useless TA (who only got the job because he’s the nephew of the headmistress) is somewhat of a stock, but again well-played. On the other hand, I don’t believe in Alan Carr‘s portrayal of the theatre critic, but his silly charm is in keeping with the rest of the film.

Writer and director Debbie Isitt chose to set the film in Coventry, her romping ground, and the film uses the ruins of the old Coventry Cathedral for the final performance of the show.

Nativity! is brilliantly funny, yet despite having opened to 346 screens in November 2009, I’d never heard of it. BBC Films often badly advertises its productions, and it’s no surprise that it grossed only £794,314 over its opening weekend. Still, as it’s free on the iPlayer until Friday evening, you’ve nothing to lose (aside from less than two hours of your time) in sitting down and watching this tremendous film.

Other reviews of this film are generally quite negative, averaging about three stars. I justify my outstanding rating because, in an age where cutty, hard-hitting dramas and deep, though-provoking tear-jerkers saturate cinema listings, this film focuses on that most British of institutions – the school play – and comes as a tremendously easy-to-watch comedy.