Christmas Day for me has remained relatively unchanged since I was born, though one more obvious difference between the Christmases of old and those of more recent years is our greater reluctance to wake at the crack of dawn filled with the excitement of the day to come: it seems the joy of opening Father Christmas‘ presents in front of our delighted parents is underbalanced by the opportunity for twenty minutes longer in bed.

Even so, once we were up and about, the stockings outside our rooms did not disappoint. As ever, we took them into Mum and Dad’s room, and each took turns to unwrap the multiple gifts inside. From less novel items such as pyjamas, to more expensive, very special, gifts like winter coats, dresses, and – in my case – a DSLR camera, all three of us were delighted with our presents from Santa. 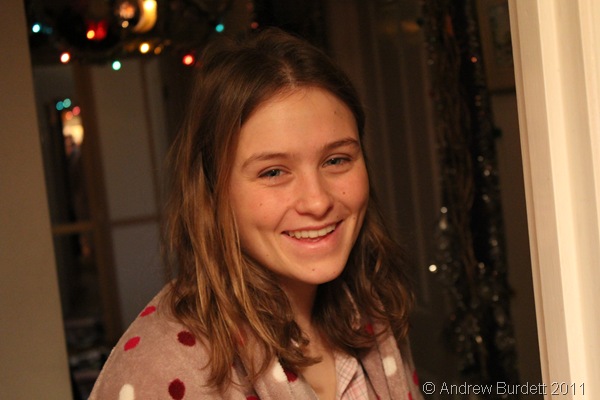 But the day was only just getting started, and off we drove to church in two separate cars (Mum and Dad went to collect Len and Win Reynolds, while Matthew drove Harriet and me down). The building was relatively full, and it was especially nice to see former congregation members who were staying in Maidenhead over the Christmas period. The sermon was surreal, to say the least, as we parishioners went from looking at Revd Sally‘s “holiday photographs” of the Middle East, to feeling bemused by an volunteering Matthew being chosen to don an angel costume (complete with wings). The last laugh was on me and Dad though, as we were presented tea towels and told to dress as shepherds. Alas, I failed to understand the underlying message of the sermon, though I think it was something to do with choosing to relate to both the lowly worshippers and those most magnificent messengers. 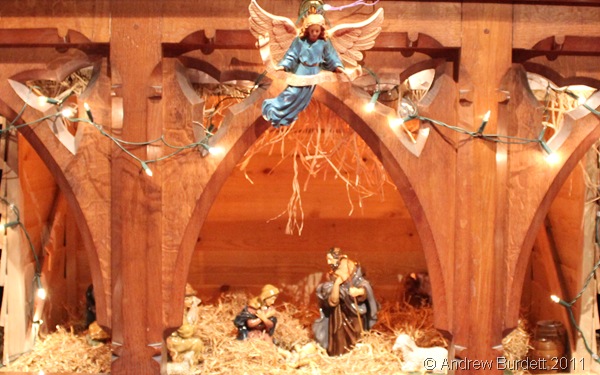 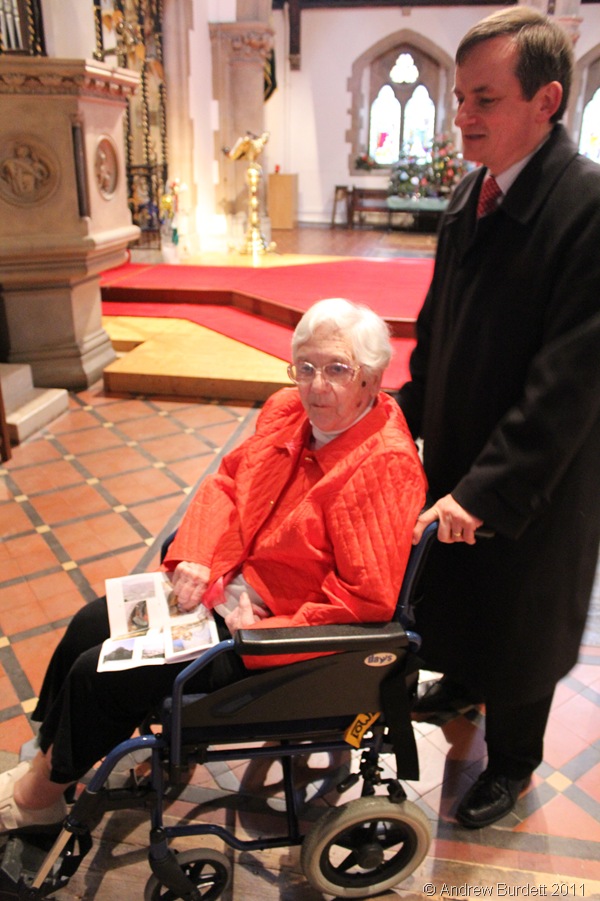 After Len and Win were safely back home, Mum and Dad took some other Maidonians to the CTiM Christmas party held at SportsAble (formerly WAMDSAD), offering them company on Christmas Day. Meanwhile, Matthew, Harriet, and I were at our and neighbours’ house, wishing them; their in-laws; and Dorothy, their mother (an ‘honorary grandmother’ figure to us), a very happy Christmas. However, though we’d really gone primarily to drop off a present, it did, as ever, turn into a full 45-minute conversation. At one point, Harriet even stuck a battery in the singing/dancing Father Christmas toy and joined in with the figure’s moves – only to quickly be silenced once again by the removal of the fourth battery by Andrew. 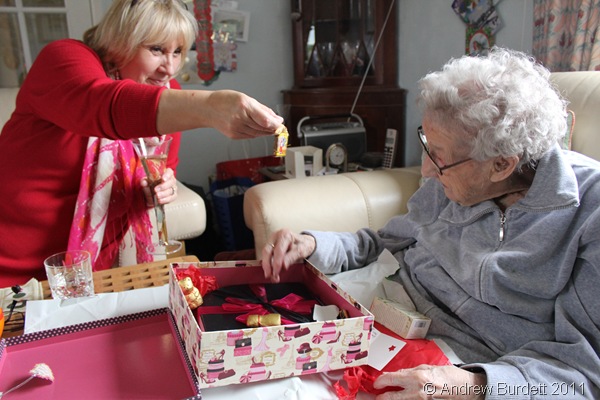 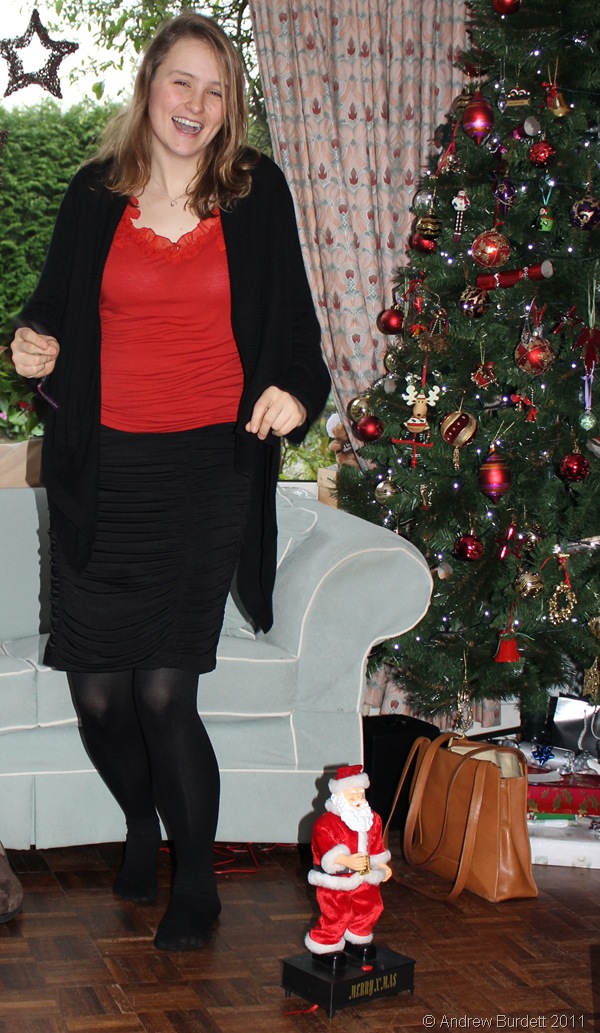 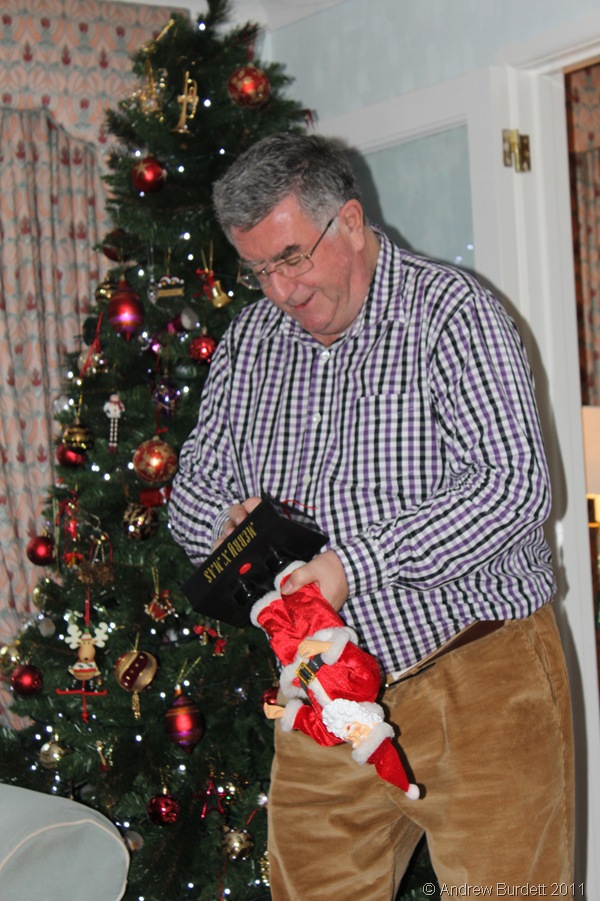 After a good chat, we were back on the road, and drove to the Oakley Green Cemetery where, little over a year ago, my maternal grandfather joined my grandmother and became the last of my grandparents to be bid farewell to. Like last year, it was sad that he was no longer with us or able to join us on Christmas Day, but by the simple act of bedding some flowers at his grave, we were able to remember him. 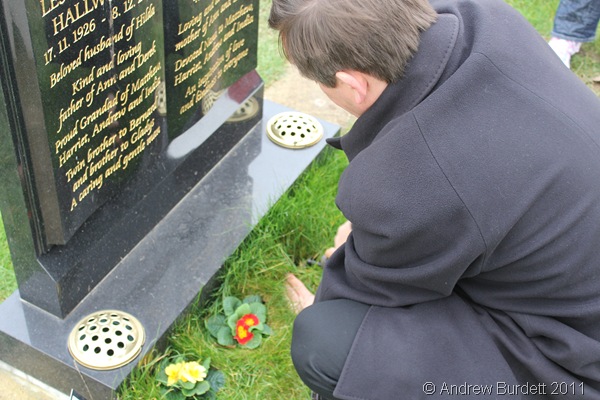 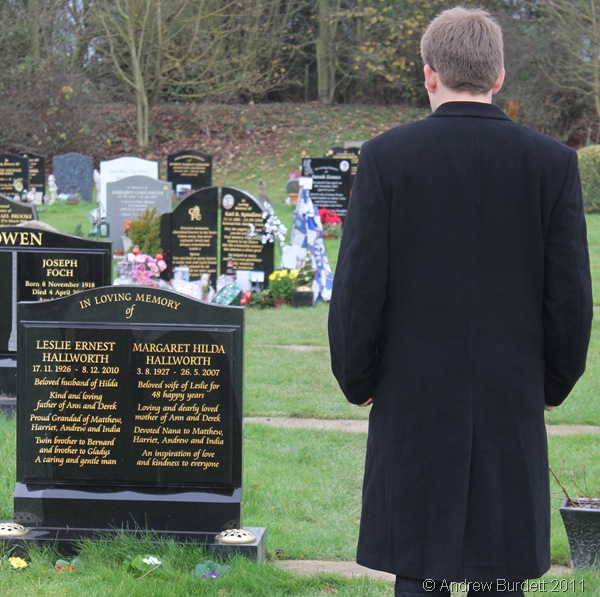 Usually, our annual Christmas morning riverside stroll has taken place immediately after church, however the complex transport arrangements postponed it to not long after 2:00pm. We never walk far on Christmas Day itself, perhaps no more than 500m due to the much longer church Boxing Day walk held every year, but we were able to walk further than we did last year, when the snow and ice prevented us from passing Maidenhead Bridge. That said, we took our time, smiling for a self-timer family photograph in front of the Sounding Arch Bridge and then making our way back to the car. 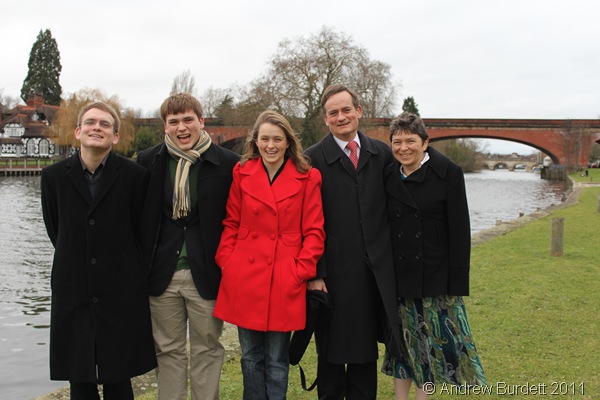 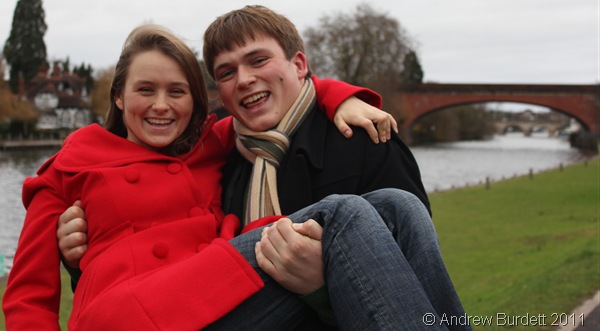 We had time to give and unwrap the majority of our ‘internal’ presents before eating, and I was given a delightful range of jumpers, shirts, and ties, along with more ‘normal’ items such as a pair of headphones and a decent wallet. On the flip side, I bought a box of shortbread and pack of UHU for Mum; for Dad, Steve Jobs‘ biography and a DVD copy of The King’s Speech; for Matthew, a new wash-bag and pack of Percy Pigs; and for Harriet, a USB data cable and copy of Toy Story 3. All seemed very pleased with their presents. 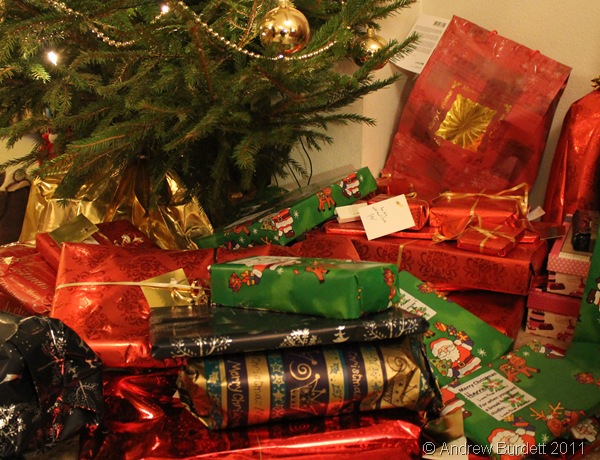 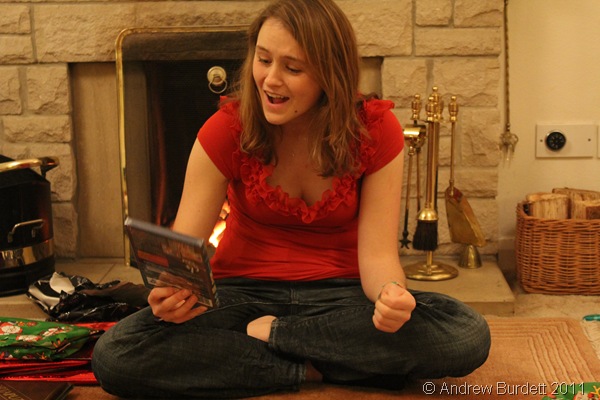 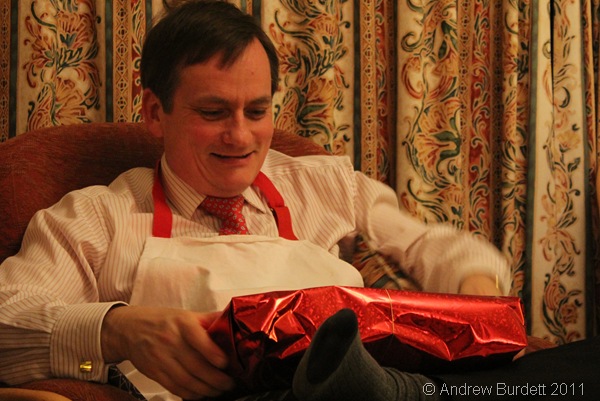 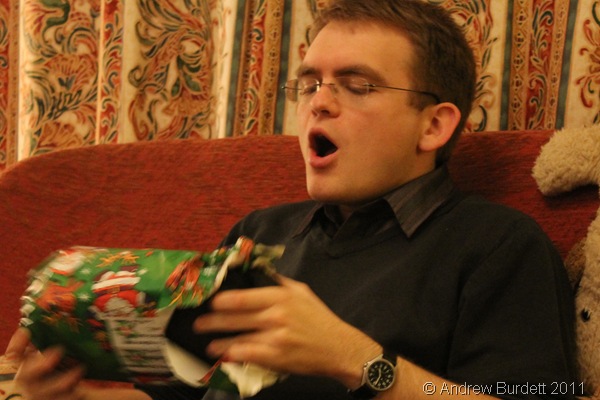 With tummies rumbling unsurprisingly (louder in some cases than in others), Christmas lunch was ready for serving at 6:30pm, and we tucked into roast turkey, stuffing, bacon, potatoes, vegetables, gravy, and cranberry sauce – knowing it would be the first and last time we’d eat a hot Christmas dinner in 2011. 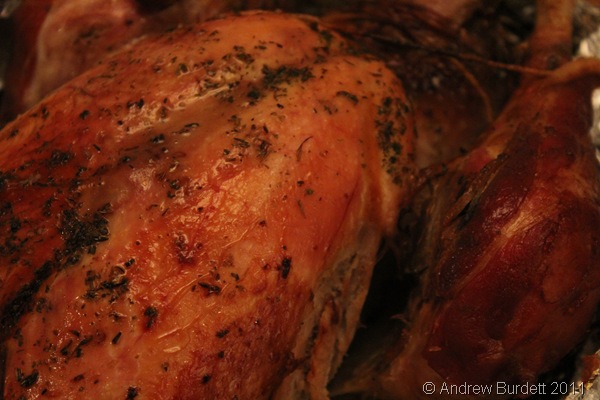 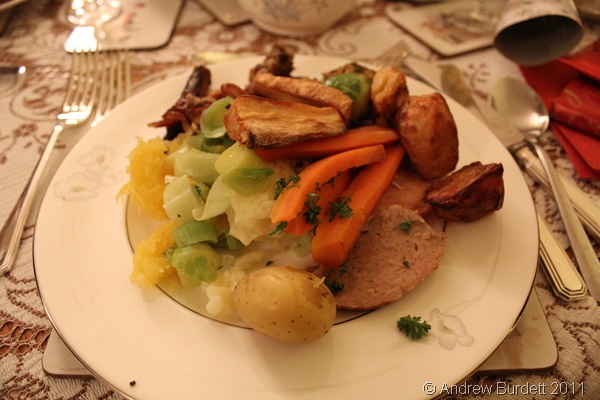 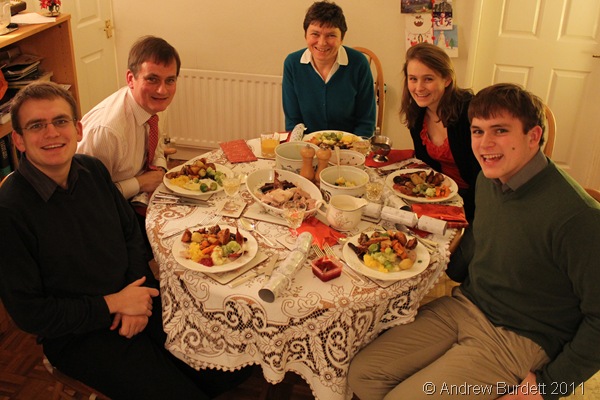 The washing-up and putting away that followed was done to a deadline: we had to get it finished by 8:20pm so that we had time to watch the forty-minute Outnumbered Christmas Special before the two-hour episode of Downton which started at 9:00pm.

It was, as ever, a hugely happy day, rounded off with the unwrapping of some final gifts from Dad to Mum before we all headed off to bed knowing how lucky we all were.