As ever, St Luke’s held its annual Harvest Festival this weekend (24 to 25 September 2011), but in addition to the usual singing of We Plough The Fields And Scatter and the traditional luncheon in the Community Hall, the church was decorated with hundreds of flowers, as part of the Maidenhead Floral Art Society‘s (MFAS) fiftieth anniversary celebrations.

(Click here or keep reading for a video of the Flower Festival.)

The colour scheme had been carefully thought-through: designed by the organiser, Pat Tyron, there was a real mix between the vibrancy and contrast of the red and yellow decorations in the porch, and the beautifully colour-coordinated arrangements in front of the stained-glass windows. 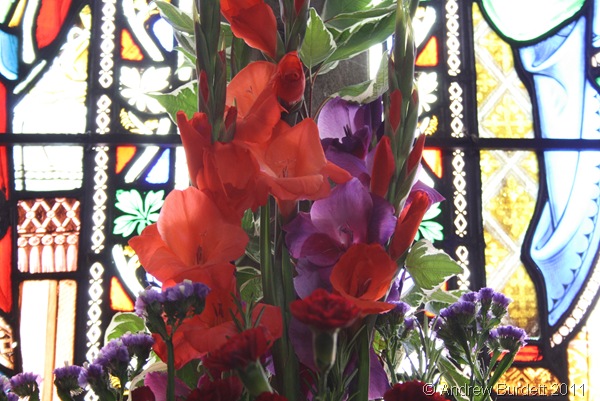 There was not a corner of the church that hadn’t been brightened up – the chapel had gorgeous flowers that matched the blue shades of the 2002 patchwork wall-hanging; the high-altar was surrounded by oblong white heads; and, on each and every pillar, a posy of blossom. 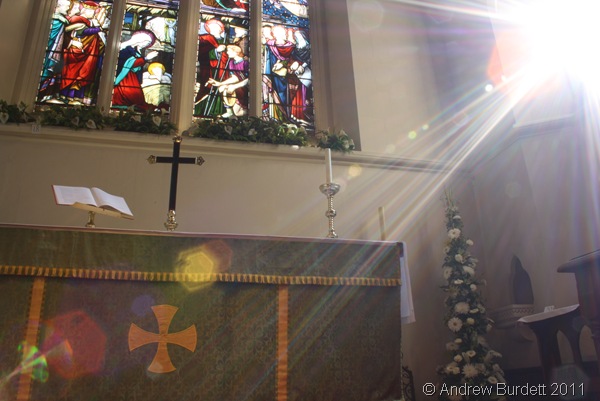 Somebody had the great idea of putting a dozen signs along the fence around the church earlier in the week, and consequently there were always a few people just browsing. Given the church was open all weekend, the numbers weren’t that unimpressive, but considering that it was free to enter, I’d have preferred more of the passing people who took a second-glance at the entrance to peek their heads around the door. 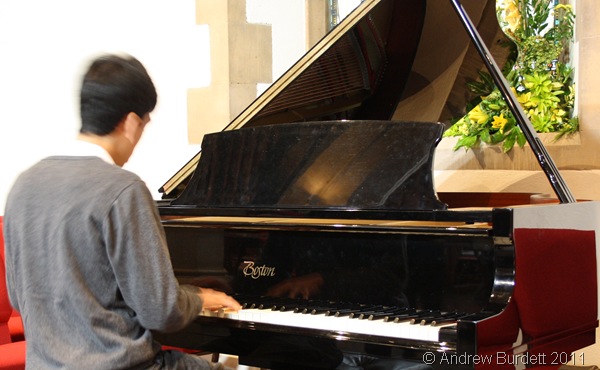 Music was provided in two sessions. The brilliant Andrew Gallagher recited a Brahms piano piece, before congregation-member Ruth Sheppard performed a number of songs. Our connection with Andrew is an interesting one: Harriet first met him whilst working as a teaching-assistant during her gap-year at The Wye Valley School, in Bourne End. He’d been learning the piano for just over a year but was already a master, so Harriet asked him to join her for an end-of-term concert held in St Luke’s, the Sunday after her last clarinet lesson with her teacher. Since then, he’s been in the Sunday congregation several times and attended the London trip in the summer, but he’s now studying at the famous Purcell School, so he’s home much less often. With an air of modesty to him, he conceals genuine talent, and while listening to him it’s easy to forget that what he’s playing is entirely from memory. Given how short a time he’s been learning, I’m sure that by the time he leaves Purcell, he’ll be a star.

Today (Sunday) saw the Eucharist attendees arriving for the special Harvest Festival service, and it was lovely to have such a gorgeous display at the altar. Gifts of food from Flyp were brought up to the front during the first hymn, and next week they’ll be assembled into boxes to be distributed to elderly parishioners.

After the service, everybody made their way across the road to the Community Hall, where the ladies (and men) in the kitchen were cooking up a storm. Succulent slices of gammon, roasted potatoes, and hot vegetables were on the menu, and we four Burdetts (Harriet was on a swimming coaching course in Hereford) joined Sally Somerville and Rhydian Jones on a table, sharing a fruity bottle of wine with them too. For pudding, there was a choice between apple pies (made with fallen fruit fresh from the vicarage lawn) and fruit salad.

Historically, there’s always been some kind of entertainment after the meal, whether that be in the form of ex-vicar Richard Holroyd tinkling the ivories or Roger and Jilly Bevitt presenting a humourous sketch. Sadly, this was not the case on this occasion, though I did manage to raise a few smiles during my ‘auctioneer’ act, in attempting to sell off the remaining, ‘doggy-bagged’ pastries. Amazingly, they sold for much higher than the asking price, reaching supermarket luxury-range amounts! After a delicious cup of coffee and the customary St Luke’s raffle, the event drew to a close. 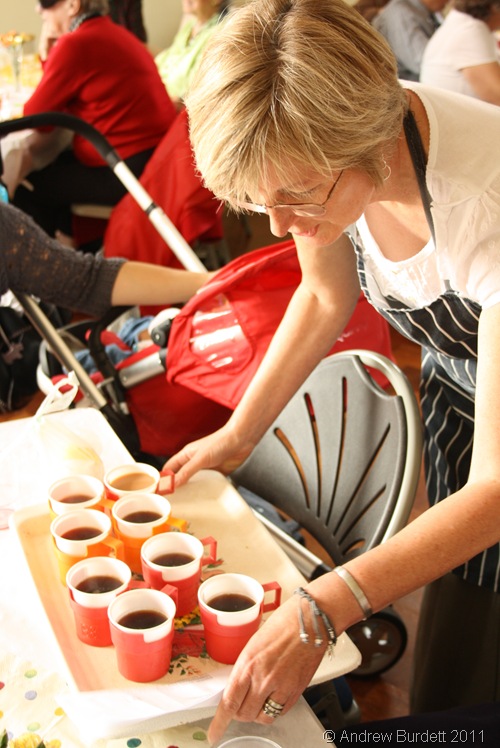 All in all, a tremendous weekend and, with the Lions Club’s Fundrun yesterday (Saturday), a very busy one for St Luke’s.

VIDEO_The video of the Flower Festival from the StLukesMaid YouTube channel.