Given how much I enjoyed listening to an interview with the BBC’s Mark Lawson in June, I was the first in Burdett Towers to express my interest for a similar event with another Beeb star, Jeremy Vine.

And so, this afternoon, I raced home from school to get changed, before cycling down to Maidenhead Railway Station. My brother, Matthew, who’d been at a lecture in the capital for his post-graduate banking qualification, was to meet me outside the corporation’s HQ. As I walked towards the famous 1930s art-deco building, the queue of fellow audience-members began to emerge, snaking around the front of Broadcasting House (known as ‘the Prow’ to staff). I knew that the BBC always hands out more many tickets for its shows than it has seats for, and began to become pessimistic about our chances of getting in. I called Matthew frantically, informing him of the need to hurry up.

It wasn’t long until he did arrive, and shortly after that the queue moved forward. As we got to the front, the BBC Studio Audiences man asked “The News Quiz, yes?”. For a dreadful moment, I thought that we were in the wrong line and that we were now certain to miss out on what we’d really come for. Luckily, this was not so, and we joined a new, much shorter line of five others who had tickets for the same ‘The Art of the Interview: In Conversation with Jeremy Vine’ event.

At 6:45pm, in small groups, we were ushered up into the beautiful Council Chamber, where Jeremy Vine and interviewer Razia Iqbal were chatting. We were the first to arrive, so bravely took the front seats. I was sat directly opposite Vine, literally a couple of feet away from him. It was so much more intimate (not just because of where I was sat, but also as a result of the smaller number of other audience members) than the Mark Lawson one. (Jeremy even went so far as to suggest that he should stand at the door and “meet and greet the audience like they’re wedding guests”!)

FIRST CLIP_Gordon Brown being played the clip where he called a prospective voter a bigot.

The format, though, was very similar to the June interview, with the questions and answers broken up by clips of ‘Vine’s best bits’. The first such clip was the award-winning interview with Gordon Brown, following the infamous ‘Bigotgate’ incident during the 2010 General Election campaign. Jeremy explained the circumstances surrounding that interview: it had been booked weeks before, but nearly didn’t go ahead. It was only when it was agreed that Brown could speak from a Manchester BBC radio studio – and without any webcam relaying to Vine in London – that it was agreed to go ahead. Then, after twenty-five minutes of addressing the issue of the banking crisis, Jeremy Vine’s screen flashed up with ‘bigot_brown_clip.mp3’, within twenty minutes of the sound bite arriving at the BBC. Vine later saw that famous image of Brown’s mortification on a television in the studio reception. Amazed that it was captured on tape after Labour refused the interview to be filmed, Vine spent days trying to find out how the broadcast camera did get in. His quest continued when a junior told him that a new BBC rule allowed anything occurring on BBC premises to be recorded.

All too soon, the interview was over, but it had been a fascinating evening listening to a true legend of broadcasting. 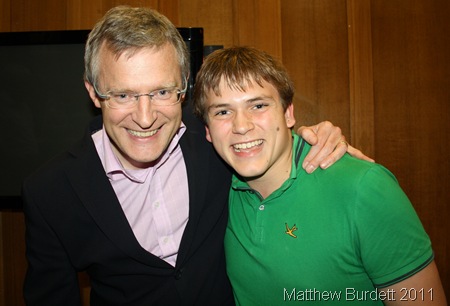 It’s no surprise that Vine said that he thinks his radio show audience often do feel really close to him, often referring to him by his first name alone during phone-ins. As someone capable of bringing the strongest figures of our society to their knees, but also able to provide incredible interviews with supporters of assisted-suicide, Jeremy Vine is a true broadcasting legend and it was a privilege to hear him speak about his astonishing career.