“Summer has come and passed… wake me up when September ends.”

It’s been six brilliant weeks since we broke up in July, but today was our first day back at school. As usual, the new Year 7s went in first thing, before the rest of the school arrived at the later-than-usual time of 10:10am.

Unfortunately for me, despite remembering to check that I hadn’t grown out of my blazer and trousers, I hadn’t tried any of my school shirts. Needless to say, none of them fitted. ‘Ah,’ I thought, ‘I’ll just borrow one of Dad’s instead, just for today’. Annoyingly, none of them fitted either.

So, at 8:50am, I cycled – against the wind and rain – to Marks and Spencer in Maidenhead. Luckily, they had exactly what I wanted, but I found myself buying the 17″ collars to fit my neck. At least I can do my top-button up now, though, unlike as seen in this photograph.

On arriving at school, it was great to see all of my friends again, and indeed to learn about what they’d all got up to over their holidays. Once face I didn’t recognise – or rather misrecognised as my friend and DofE comrade Jack Clifton – was a lad called Nathan. The similarities in looks were uncanny, but their backgrounds were hugely contrasting: Nathan arrived in Britain just days ago, after his father’s job moved from New Zealand to these shores. 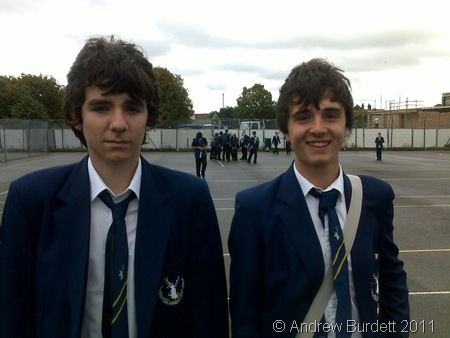 The new Music department (which has absorbed the old Drama terrapin) is really impressive, and beautifully done. It’s not quite done yet, but the last bit still to do – fitting the exciting recording studio – should be completed by the end of the week. However, the new Drama block is, as I’d been expecting, still unfinished; indeed, many of its bricks were still waiting to be cemented in. Again, though, once it is done, it’ll be a lovely area. 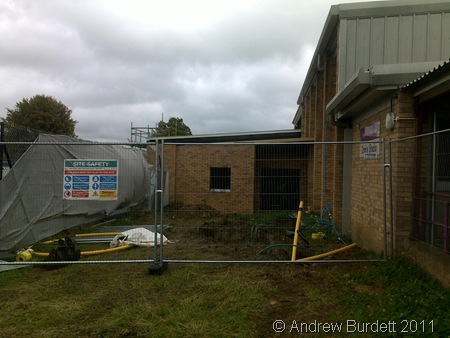 One teacher more excited than most is Mrs Armstrong, head of music at Furze Platt. She said, “I can’t believe it. We’ve gone from having the worst Music and Drama facilities in the Borough to having the very best in a matter of weeks.” She was a little disappointed that the computers in her room hadn’t already been installed with the Sibelius software necessary for music composition as she’d been promised, but understood that the IT technicians are extraordinarily busy. “In addition to the usual beginning-of-term tasks of supplying new teachers with laptops and keeping the online register software up-to-date,” Mrs Armstrong continued, “the technicians have got to wire up new projectors, update all of the computers to Windows 7 and Microsoft Office 2010, and ensure the Wi-Fi works in rooms that never previously existed.”

As I begin my final year of compulsory education, I can’t wait to get hands-on with the new facilities, and I’m sure that they’ll help me do my best come the summer’s onslaught of exams.