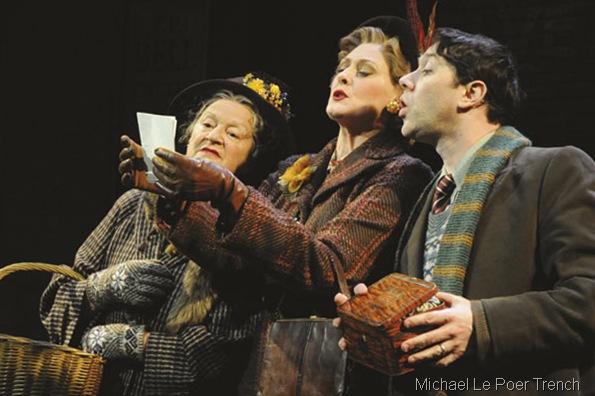 I think it’s probably something where you either emerge thinking it was great fun, or you leave having failed to grasp the show at all. Sadly, I fell into the latter category after watching tonight’s performance of Betty Blue Eyes at the Novello Theatre.

It was just bizarre. I mean, visually, it’s great; the set design, lighting, and costume were all much better than I’d been expecting. The projection, displaying Pathé newsreel from the era the play’s set in  (the immediate post-War years) was highly effective. The use (perhaps overuse) of the fly-tower also added visual impact, as houses, living rooms, and staircases descended in a divine-like fashion from the sky.

However, staging aside, the show itself has a distinct school musical-ish quality to it – but then, in fairness, it’s written by the same pair who wrote the brilliant HONK! that I starred in last year. The score is, vocally, not at all demanding and, on the whole, the plot failed to keep me entertained. Between bizarre moments of dialogue there’s a number of musical items, accompanied (sometimes) by awful chorography. I say ‘sometimes’ as the decision over which items would have dancing seems to have been made erratically: some were completely static while others looked like something an LSD-addict may hallucinate. 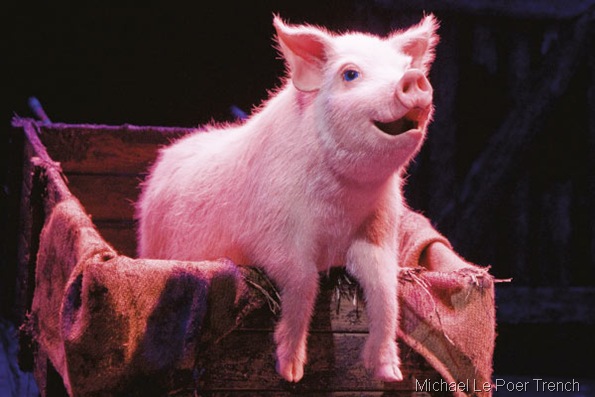 The title character is played by an animatronic pig, whose flesh is sought after during the meat shortage of the food-rationed 1940s. Whilst the Ministry of Food inspector desperately tries to ensure that “everybody gets their fair share”, a poor couple called Joyce and Gilbert Chilvers (played by Sarah Lancashire and Reece Shearsmith respectively) are hiding the animal after stealing it for their own dinner. There’s a great deal of toilet humour surrounding the sound effects that the reeking beast produces, which surprisingly appealed to my fellow audience members – primarily, oddly, in the 40+ age bracket. There’s also a nod to Shakespeare’s great Macbeth, where the poor wife charges her husband with the task of drawing the blood. Although the quote “Is this a dagger which I see before me?” as she lifts the blade herself is a blatant reference, the show goes further my mirroring Macbeth’s mindframe of ‘Am I man enough?’. (Indeed, there’s yet another song devoted to this simple yes/no question.) 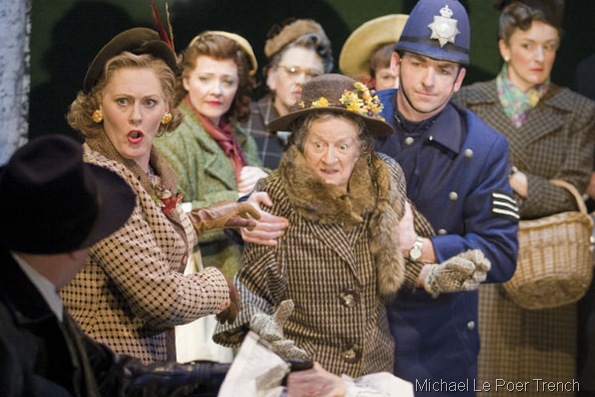 The real star of the show, though, is Joyce’s mother who lives with the couple in their home. The actress who plays the role (Ann Emery) clearly enjoys what she does, and whilst (like all of the other parts in Betty Blue Eyes) it’s not a tough character to portray, it’s certainly the most fun. There’s a great scene (even if the punchline is rather predictable) where the couple are discussing how they’ll kill Betty (the pig). The elderly mother overhears their discussion and believes that they are in fact talking about how they’ll kill her. (“We could poison her, or lead her up onto the roof – she’s bound to follow us…”) It had the audience in hysterics, as the elderly lady’s facial expression display her disbelief and fright.

I’m never afraid to give something a shot. Of course, I’ll read reviews before booking tickets, but I like to step outside of my comfort zone. I also hate to sound a snob, but think there’s little to be gained by saying one enjoys everything they see if in fact they don’t. Certainly, the majority of the other theatregoers loved it, and some even gave a standing ovation during the bows. For me, though, (and I’m struggling not to sound like an X Factor judge) I just didn’t get it. I’m amazed that anybody could stretch out a story about a pig intended for the slaughter into a musical lasting two-and-a-half hours. Personally, this show demonstrated that people are willing to try, but they’ll inevitably fail to make it any good.

Having said all that, a tenner for a seat in the stalls (I’d been granted a free upgrade from my ‘up in the gods’ place) is remarkably good value for a night’s entertainment, even if I found myself laughing out of embarrassment than out of the show’s attempted humour.