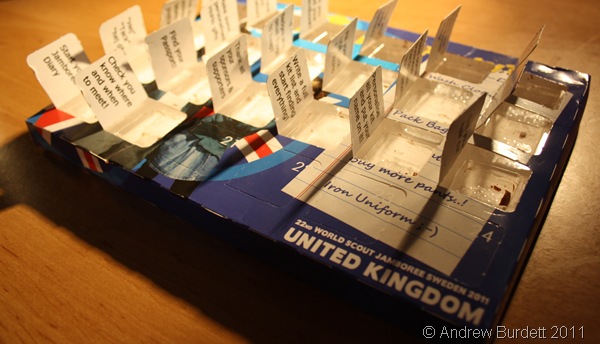 What was once a huge, three-character-long number, is now just ‘3’. That’s the number of days there are until Saturday, when I (along with the rest of the Berkshire Unit) will be dropped off at a Scout hut in Slough, marking the start of our Jamboree adventure. We’ll then attempt to get a bit of sleep (though I’m not sure that the inevitable excitement will help with this), before waking up at 3:00am on Sunday, 24 July, and flying out of Heathrow just after 6:00am. We’re actually spending a few days in Copenhagen waiting for the rest of the UK Contingent to arrive (there simply aren’t enough planes to get all 3,000 UK attendees out on one day). Then, a week today, we’ll travel to Sweden for the start of the two-week Jamboree itself.

When I first wrote about the ‘Countdown to the Jamboree’, it was in March 2010 and there were 490 days to go. They’ve unarguably gone extremely quickly, but none more so than these past few, which have been filled with final preparations for Sweden.

Last Saturday (16 July), I took my kit to 2nd Thatcham Scouts HQ for it to be inspected. This was after much effort in packing it the night before, but eventually everything – except the UK-branded sleeping bag I was yet to be given – just about squeezed into the holdall.

"I’m genuinely concerned [about packing all of my kit], not least because the supplied ‘free’ kit already weighs down the [supplied] holdall quite substantially." 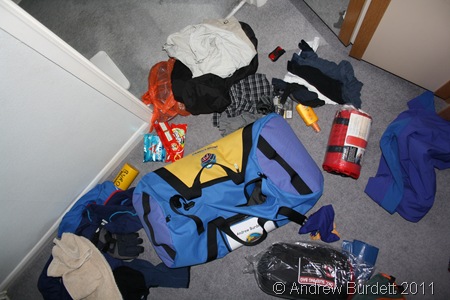 Following a suggestion in the Jamboree ‘advent calendar’ that each UK participant was given, I decided to make some business cards with my contact details on. Having left it too late to use exceedingly cheap company Vistaprint, last night I designed some business cards, which Dad managed to print off at work today. (I was keen to ensure they were done on his work photocopier, as it uses laser printing technology – doing it on an inkjet printer would result in smeared colours at the slightest bit of rain.) I’m really pleased with how they’ve come out, even if it did take some time to fold and cut them all! 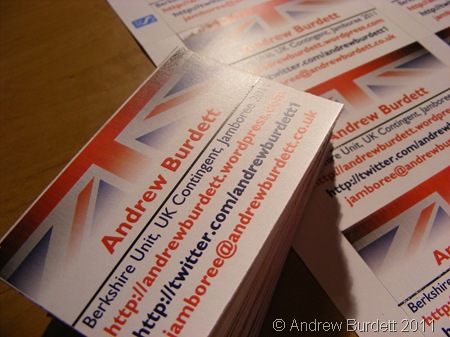 Another of the things I’ve purchased ahead of the trip is a Freeloader Pro. In theory, this’ll allow me to charge my camcorder battery whilst I’m out there, using energy from the sun. We have no idea what mains charging facilities will be available, so this is a last-resort, but I’m hoping (perhaps too optimistically) to find a convenient socket somewhere. I mean, there must be something that the cleaners plug their vacuum cleaners into…

Finally, the photos below are just in from the Jamboree site. It’s hardly surprising how many bins they’ve got – there’s going to be 38,000 people on site (making the Jamboree field the fourth largest town in Sweden, albeit temporarily), and you can be sure we’ll make an awful lot of rubbish between us! 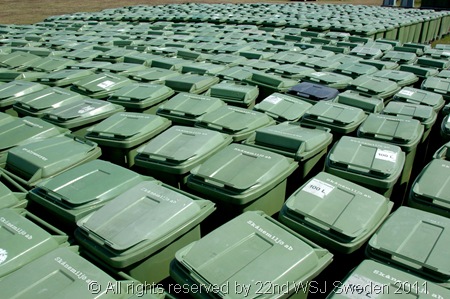 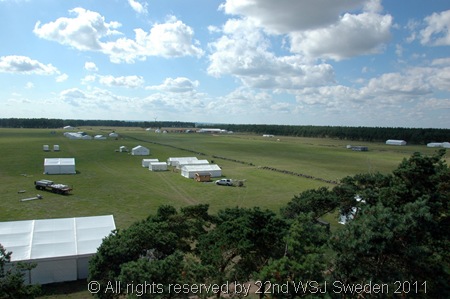