In February, I received an email from Mrs Heales, my Chemistry teacher and the head of science at my school. In it, she wrote about the upcoming Salters’ Chemistry Camps, taking place in universities around the country. With places filling up fast and keen not to have to march all the way up to Fife, I filled in my application form for the Bath University one. However, as I went – first thing the next morning – to hand it in, there was a problem. Also in the classroom, handing in their completed forms too, were a dozen of my classmates and peers. As Miss was only allowed to send four students from Furze Platt, it came to the luck of a draw and, sadly, my name wasn’t chosen. I was gutted. Having looked up the camps, I’d seen photos from previous years and was certain they’d be good fun. There was, though, a glimmer of hope. One lad who’d, for deeply political reasons, had a place ‘reserved’ for him, kept forgetting his form, so there was a re-draw for the fourth place. Needless to say, mine was the lucky name plucked from the hat (or rather test tube), so on Wednesday, I set off for Bath on the train.

I arrived at Bath Spa station just after 11:30am, but despite being told to arrive between 11:15am and 11:45am, I couldn’t see anybody representing the camps on the platform. Then I realised they were probably downstairs at the entrance to the station itself, and sure enough they were.

A few of the thirty who arrived by train had come with friends from their respective schools, but as I hadn’t, I slotted into a group of ‘lone travellers’. Just as the leaders were checking off our names against their register, one girl (called Magda) recognised my name. I first met her three years ago, at a Scripture Union camp called Livewires, but hadn’t seen her since 2009.

“Andrew Burdett! He IS from LiveWires. #winning”

After a short coach journey up the hill, we were all at the main university campus. I dumped my suitcase, grabbed a packed lunch supplied by the organisers, and began talking to the other 49 campers (twenty of whom had arrived by car).

The first experiment that we did involved making our own sample of paracetamol, and then adding a number of reagents to it. We added the same reagents to three unidentified identical substances, in a bid to work out which of them was paracetamol also.

“Salters’ is fab, and the people are awesome. Made paracetamol, moved into our rooms, and now off for dinner.”

After the experiment, we listened to a quite young representative from GlaxoSmithKline (a key corporate sponsor of the camps), speaking about how he got into a career in the pharmaceutical business, from school, through university, and then landing the job itself. It was very interesting, and for some, particularly inspiring.

We were each allocated our own ‘studio bedroom’, but had little time to settle into it before dinner. After the evening meal, we all enjoyed a ‘Fizzes, Pops, and Bangs’ lecture and demonstration by a member of the university staff, before working in teams for a quiz.

Thursday began with a school-time start, as we all sat in the university canteen for breakfast. From there, we headed to the laboratories once again, where the morning practical involved ‘cold light’. ‘Cold light’ or chemiluminescence reactions are where light is produced, but with little or no heat. (It’s the same stuff that’s used in glow-sticks.) A formula would be [A] + [B] → [◊] → [Products] + light.

The afternoon’s activity was a similar ‘strand’ of chemistry (in that it produced visual effects), but based around the Briggs-Rauscher reaction. This is a type of chemical clock, where a pre-prepared colourless solution turns an amber colour, before going a deep blue, and then back to the colourless state.

Notice in the pictures below, how the two beakers of chemicals oscillate between the amber and the dark blue between the two photos. No other chemicals were added to them between the photographs being taken. 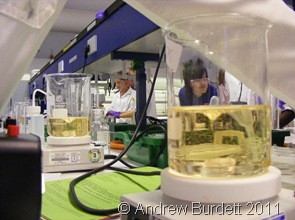 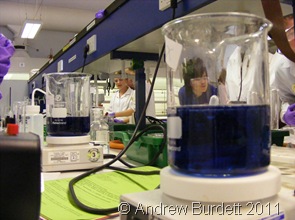 After experimenting with different ratios of chemicals in the solution, a challenge was set up whereby each team of five pairs made four ‘clocks’ between them. One clock was ‘tuned’ to change colour at 15 seconds, the next at 30 seconds, the third at 45 seconds, and the fourth at 60 seconds. As half of the fifth pair, I helped the others in my group. 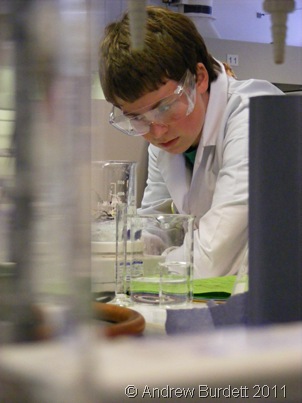 Once we’d all ‘tweaked’ our solutions, stopclocks were started and each team added the chemicals into the beaker. Points were lost for every second away from the supposed time. Although in the video below the competitor was vying for the mixture to change colour at 15 seconds, in fact it changed at 17 seconds, so lost two points.

Overall, my group lost the fewest points, so won a prize of a box of chocolates to share between us. It was the icing on the cake for a really enjoyable day.

After dinner, the evening’s activity was a trip to Bristol Bowlplex, where each group had one game. I didn’t do too badly, but I wasn’t great either. Fortunately, a couple of strikes balanced out the goes when I missed all ten pins!

Finally, it was back on the bus and back to the campus, where the majority of us were all too keen to head off to bed after a long day on our feet.

Following a cooked breakfast, we packed our cases and left them in a downstairs lab, before making our way to the other laboratory upstairs, where we conducted our final experiment. This time, we were playing with cyanotype, a practice where one uses photosensitive chemicals in a tray, to ‘paint’ the area unmasked by a negative. It sounds particularly confusing, but in fact it’s relatively simple: which makes it no coincidence as to why the method was used for producing multiple copies of an image until dry photocopying became more affordable.

I chose to create my negative of a photograph of me holding a sign saying ‘THANK YOU SALTERS’. I used Corel Paintshop to invert the image, and then printed it out onto an OHP acetate. My fellows mainly used graphics from the internet, with guitars and celebrities proving most popular. 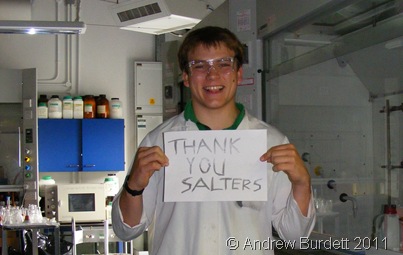 After letting UV light seep through onto the paper below, I took the image and used the blue dyes to make the image. It came out quite badly, and all I could make out (even vaguely) was the message. The technicians blamed this on me leaving the image out in the bright lab for too long. However, the designs of others came out better. 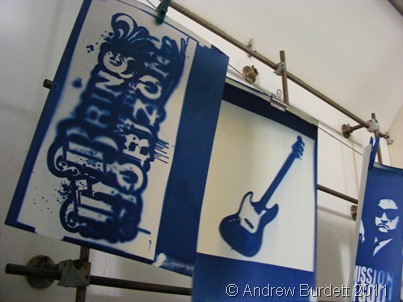 Sadly I can’t show a photo of how mine came out, because it’s in a bag on a train somewhere, ferrying back and forth between Bristol and London. Fortunately, nothing of too much value was in it (aside from the safety specs and labcoat that my school lent me). Sadly, in losing the bag, I lost my notes and ‘souvenirs’ from the three days – a real disappointment, but hopefully they’ll turn up one day.

As somebody unsure as to whether to pursue a more scientific future, or a more arts-based one, the camp certainly gave me food for thought, and even if I do go for the latter, I leave with a far better understanding of the chemical industry and the potential jobs within it.