As my work experience week comes to an end today, I summarise my last ‘day at work’ with Virgin Media.

This morning, Ade Brittain collected me from my house in his car, and before setting off he showed me a street cabinet near my home. It has just one patch in it (meaning there’s only one person on our road who is connected to Virgin Media cable services). It was good to see something that had been spoken about a lot in the last few days actually out ‘in-the-field’.

We then set off for Reading where the regional headend of VM is based. After collecting a jobsheet, which lists the addresses of each of the properties that engineers are heading out to, Ade and I drove to the first house. The two guys who were there had already taken the cable into the home and plugged it up to the equipment, but for some reason the laptop upstairs couldn’t access the internet and the TV downstairs couldn’t ‘pair’ as it should. Ade and I helped do a ping test whereby we proved that we could reach the server at www.google.com, leaving the only other real possibility being that it was something wrong with Internet Explorer. As for the TV issue, it turned out it was a region-wide problem; boffins in the control centre promised to resolve it later, and the guys (needing to get to their next job) left. As we drove to follow them, Ade explained that one of the biggest complaints that Virgin get is that engineers leave without getting the equipment going. On the flip-side though, the crews work long days with many call-outs in each. If they don’t stick to their strict timesheet, customers who’ve waited around all afternoon would have done so in vain – the engineers just wouldn’t have time to fit everyone in. 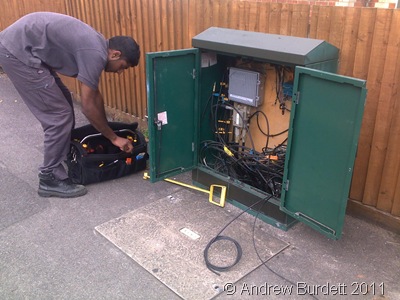 The next job that the crew attended to was the installation of a cable phone line. I was told that it’s rare for customers to opt only for one of the three services VM offer (TV, broadband, and phone), but extremely unusual for the service they do go for to be cable-telephone. It was great to watch the first half of the process, and how the crew know what to do in each of the vastly different homes we watched them at.

Our final stop was at another property, with a one-man-crew who was repairing a connection. This man was very different in his practice to the other two, so it was good to see another example of Virgin craftsmanship.

After grabbing some lunch, Ade and I returned to the headend where he filled out the pack I’d been sent with from school. He wrote, “Throughout this work experience placement, Andrew has displayed an outstanding level of enthusiasm and willingness to learn. He is very articulate and mature beyond his age, and should be very proud of his input his week.”

I’ve had a brilliant time at Virgin Media, thanks to Kevin Baughan for organising it, and the brilliant Future Technologies and Innovation Team, who took me under their wing to make for a wonderful week.

READ all of the posts from my week at Virgin Media by clicking here.