This weekend saw the Berkshire Jamboree Unit meet up once again for a training camp, but this one was special: it was the last time we’ll share tents before the Jamboree itself.

I’d kindly been offered a lift to the camp from a fellow Jamboreer’s mother, so myself and a few others arrived at the campsite in Stoke Poges just before the 7:00pm start time. However there was no sign of any leaders and, with the rain beginning to fall, both our kit and ourselves were starting to get wet (nobody had opened the hut for us to keep dry in). I therefore decided to shelter in a children’s playhouse, and was soon joined by others.

TAKE COVER_We sheltered from the rain in a children’s playhouse.

Eventually, the leaders did arrive, and the first job was obviously to get our tents up. Annoyingly, Andrew Mott was bringing mine and had only just left work – 45 minutes away by car. But the wait was more than worth it: he’d brought along a five-man tent, with enough space to stand up in, to share between just three of us. There was ample space, and it ensured I got a good night’s sleep.

Saturday morning broke wet, with all of us waking up to the sound of raindrops falling on the canvas of the tent. After getting up and dressing, we enjoyed a cooked breakfast prepared by Andrew’s patrol, and then formed a line to be handed some unit-purchased kit. This included a marvellous advent calendar, with a door to be opened every day from 1 July to 24 July – the day we fly out to Denmark at the start of the UK Contingent’s Jamboree experience! More practical kit included a highly-compactable roll-mat (great for squeezing in the supplied holdall with its limited-space). 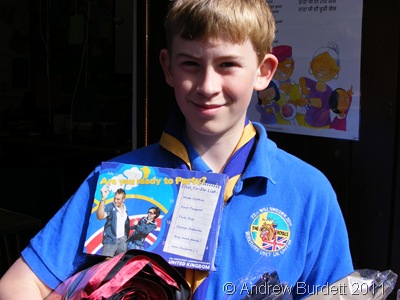 We all joined together in singing the Jamboree song, from the words printed in our handbook (jokingly called a ‘hymnbook’ by Assistant Unit Leader Tim Haggett).

After that, we headed outside where four chairs had been placed. These marked the corners of the size of the camp that we’ll have in Sweden. To give us an idea of how close we’ll be to each other, we moved our tents to the newly set-out perimeter.

MOVING TENTS_Literally just picking it up and walking with it, two Berkshire Jamboreers moved their tent.

Whilst the other two in my tent worked quickly to move our one, some were more slow and, needless to say, the rain soon started lashing down again. The weather did act as a catalyst though, speeding people up and getting the job done quicker. 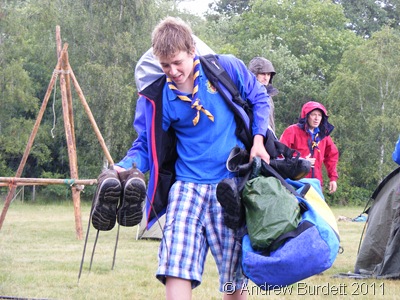 Bizarrely, as rapidly as the rain came, it went. Unbelievably, the photos below were taken within just twelve minutes of the above one, despite the contrast in sky colour (such was the variation in weather during the day). It shows a few of the best ‘pioneers‘ in the unit, under the guidance of the leaders, in the process of putting together a gateway. The intention is that a similar design will be copied when we actually reach Sweden. 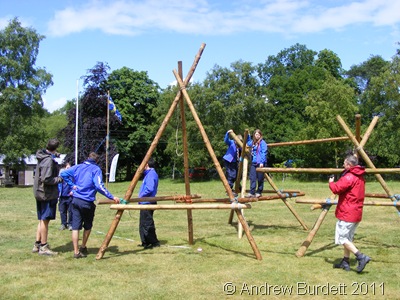 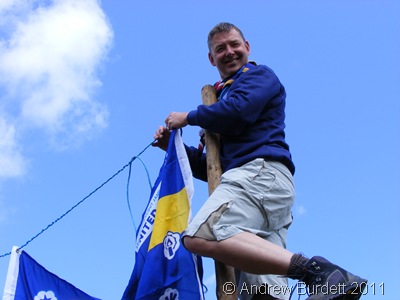 After lunch, the afternoon’s activity was a two-hour session on the campsite’s permanent zip-wire. This was really great fun and it was brilliant to see everyone willing to give it a go, despite some members having a slight fear of heights. Most went for more sedate ways of flying through the trees, whilst others chose to pull daring poses. 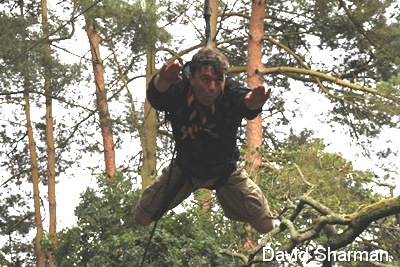 My patrol were cooking dinner that night, so we returned early from the session in a bid to ensure it was all going to be ready in time. We’d earlier chosen to make Sausage Stroganoff Stew (page 45, 22nd World Scout Jamboree Cook Book), so set about separating the sausages, peeling the potatoes, and chopping the onions. 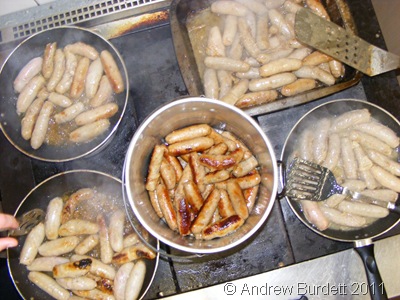 For dessert, Patrol Leader Sophie Taylor made a couple of bowls of Angel Delight chocolate pudding. 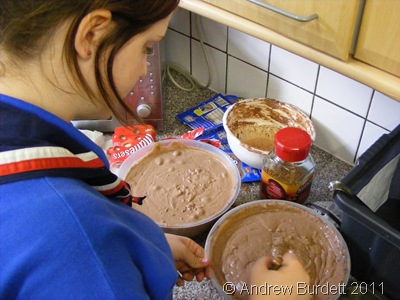 The evening was rounded off by a number of us sitting around the campfire’s roaring flames.

Sunday morning was much brighter and warmer than the day before, and I decided to make use of the later start by having a shower. I’d heard that it was warm, but in fact this was not true (or certainly not the shower which I used). It was a tolerable experience though, even if I had to drip-dry afterwards due to the fact I’d forgotten to pack a towel!

In what is rapidly becoming a tradition for Jamboree training camps, Sunday’s breakfast had a continental spin – meats, cheeses, and pastries.

The majority of the morning was spent outside, thanks to the more reliably dry skies. There was one short shower, but fortunately it lasted only a matter of seconds. Whilst a small group voluntarily continued pioneering (this time making a giant chair), the rest of us amused ourselves by playing a few games. One of these games included spinning around for a set time, before having to all stand on one leg and balance. A variation on it was to spin around again, though this time having to give each other piggy-back rides. It resulted in some very dizzy piggies!

All that running made us hungry, and we lined up for lunch at 12:30pm. The meal consisted of a traditional ploughman’s, with some crisps and fruit also on offer. 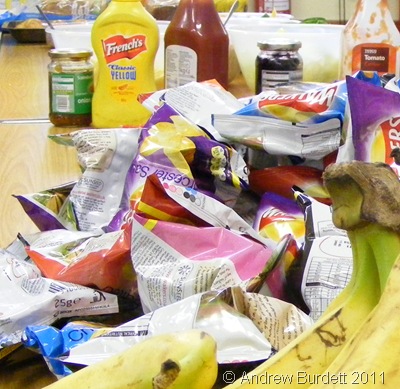 With the camp drawing to a close, the early afternoon saw us clearing up. My patrol had been delegated the unenviable task of cleaning the toilets. We, in turn, delegated the dirtiest of all its subtasks – namely the cleaning of the men’s urinal – to the smallest (and remarkably manliest) patrol member, Sam. 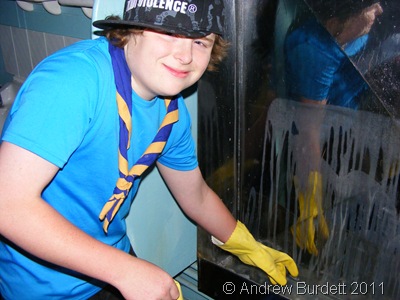 The weekend concluded with a final parents’ information session, that provided guardians with a far more detailed idea of the entire trip than the previous such session in March. Once again, I provided a video to finish the leaders’ talk with, this time a series of Vox Pops from members of the Unit. I got Andrew Mott to ask almost everyone for a few words on their Jamboree experience so far, and David Sharman kindly recorded on his Canon DSLR. I spent most of Saturday evening editing it with the basic Windows Live Movie Maker, a world apart from the likes of Final Cut that I normally use. That said, I am still pleased with the final product; it’s a fun look at our individual experiences so far.

Simon Pickett, one of the Unit Leaders, closed with a sobering thought. Now, unlike the first time a countdown in days was given (way back in March 2010), there are just 34 days until we go. It’s really genuinely exciting stuff.