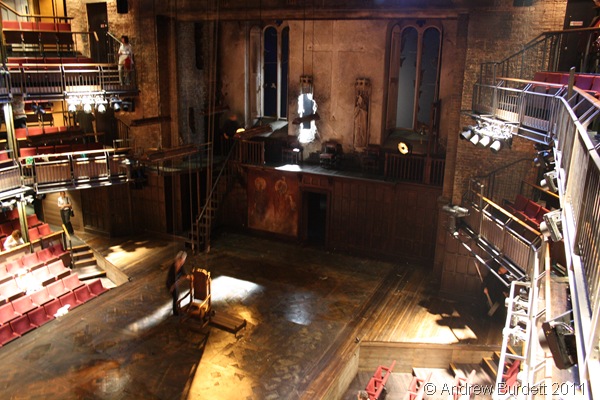 It’s been a great half-term and, amid two trips to the dentist, I’ve enjoyed a morning in Legoland with my brother on Monday, a day in Cliveden on Wednesday, an afternoon at the BBC’s Broadcasting House in London on Thursday, and of course an afternoon in Stratford-upon-Avon yesterday (Saturday). Sadly, I’ve actually had to turn down invitations from friends to meet up, in order to squeeze in a bit of revision for this Wednesday’s RE exam! At each of these events, I’ve obviously taken photographs so choosing this week’s photo hasn’t been easy. I love the shots I got at the water-garden at Cliveden, but we go there quite regularly, so it wasn’t my first choice. Whilst the contrasting image of the old and new at Broadcasting House is impressive, I’d cropped out of that image a large amount of garish hoardings, so it’s not an original photo I’m proud of. So instead, I went for an image from Shakespeare’s hometown – given how impressed I was with the new Royal Shakespeare Theatre complex there, it seems only fitting to showcase a photograph from the first ever production we saw at the theatre (Macbeth).

I know there’s some motion-blur caused by the slow shutter-speed. There’s some great pictures from the Tower, which display the whole of Stratford on a beautiful day. But, strangely, this is the photo that I think will remind me most vividly of this week when I do look back at the end of the year – the very purpose of ‘Photo of the Week‘. And after all, it’s the theatre itself I was so amazed by, which the Tower is just one part of.