Take a quick look on the BBC’s website and you’ll find a section offering free tickets for some of the broadcaster’s most popular programmes. It’s through this that Mum got tickets (for both of us) to be members of a live audience for a two-hour session entitled ‘The Art of the Interview: In Conversation with Mark Lawson’ (being recorded for the BBC College of Journalism). For those who aren’t such big fans of BBC Radio 4, Mark Lawson‘s a brilliant journalist, whose career has seen him start out in Fleet Street, and follow him to being a presenter on arts programme Front Row.

The Beeb is notorious, however, for handing out more tickets than there are seats. It’s understandable; as they’re free, not everyone who requests one will turn up – just imagine watching Would I Lie To You with a half-empty audience. As a result, we had to get to the venue at least 45 minutes in advance to be at the front of the queue.

Walking into Maidenhead Station, though, there was a problem. Railway maintenance works were plaguing the South East’s tracks; men in orange jackets had a visible presence even on the station itself – including one on his phone. 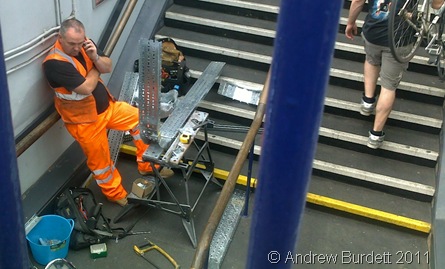 Because of the works, we were already running late, although we did get a halt-less journey to Paddington. Our destination was Broadcasting House, so we headed to Oxford Circus over the Bakerloo line. There, I further delayed our trip by making what should have been a short walk, a fifteen-minute trek. I’d taken a wrong turn, mainly because, when I’d checked the route on Street View last night, the connection was poor so I didn’t get a great idea of exactly where to go.

By now, it was already later than we’d initially intended to arrive, so by the time we arrived on Mark Thompson‘s doorstep (breathless, from running), there was already a queue lining the building. I was now worried that our trip would have been wasted. In fact, we were the 71st and 72nd audience-members to be allowed in… out of a maximum allowance of 75. We were so relieved, and what a treat we had in store!

The ‘interview with the interviewer’ was fascinating, staged in the beautiful council chamber, and broken up by examples of Lawson’s previous interviews displayed on plasma televisions. He told of how he always does his own research, giving him the confidence to quiz authors on specific parts of their books. He claims he once interviewed somebody who, when questioned why she’d written such a derogatory comment in her book, completely denied ever doing such a thing. When he turned to the ear-marked page and read it to her, her simple response: “Oh, you’ve got the English edition.”

At the end, there was an ‘Any Questions’ time, where I asked him the following: “After his recent interview with Barack Obama, Andrew Marr wrote a blog post explaining he never has notes on his lap, as it means he keeps eye-contact with his interviewee. Do you not find that the presence of a notepad on your knee restricts your relationship with your guest?” He replied that, as his interviews are often a couple of hours long (compared to Marr’s eighteen minutes with the President), remembering all of the points he wanted to bring up would be impossible. On the other hand, he pointed out that he now takes care to write them in illegible handwriting, rather than typing them: this prevents his interviewee from preparing answers during tape-changes.

All too soon, the two hours were over, but all of us in the audience had been inspired by Mr Lawson’s fascinating words. We finished our evening with a ride on the London Eye (newly rebranded as part of a three-year deal with EDF), meeting up with my brother who’d just finished work, and making the most of our Merlin annual passes. 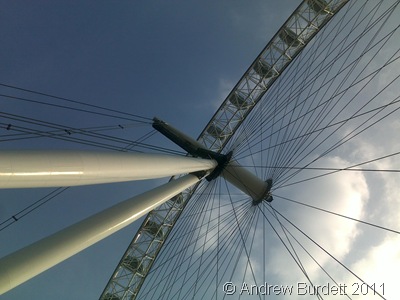