I’ve just finished putting together a trailer for some of the films which I’ll be making over the next few weeks. It’s surprising how much I’ve shot recently but – due to exams – I haven’t had the opportunity to package any of it up (aside from the Royal Windsor Tattoo video, as embedded in the blog from that day).

Because I now use a tapeless camera, there isn’t the old restriction of an hour of footage per MiniDV tape. That’s great in some situations, and it means that clips can be downloaded faster than real-time, but it does mean that it’s all too easy to lose track of quite how much footage you’ve got stacked up. As a result, I’d underestimated the amount of footage that I’m going to have to trawl through from Catalonia, Furze Platt Junior School, and the DofE Bronze practice expedition. That said, both the Spanish tour ‘epic’ and the short film I intend to make from DofE will be fun to do.

Above: Whilst filming on the canoes during the DofE Bronze practice expedition, I used a special waterproof casing to protect the camera from the splash that my paddle made.

Above: The Spanish treated us to excellent weather during our [Taplow Youth Choir’s] tour of Catalonia.

Below: An ensemble from the choir performed by the pool at the hotel. 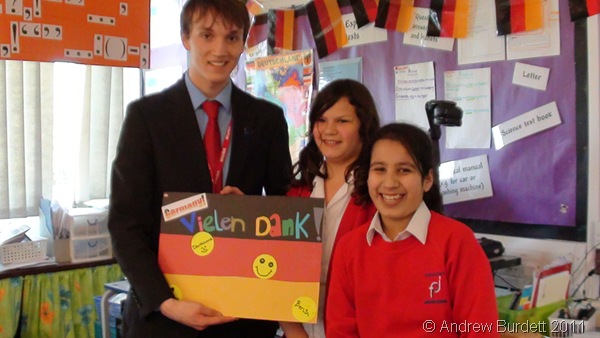 Above: Ben Scrace receives a ‘thank you’ card, on finishing his stint of teaching German at Furze Platt Junior School.