Today should have been the start of a pause in my examinations, and a signal of the beginning of the winding down of the end of term. After all, with a mere Biology retake and RE paper to complete after half term next week, the pressure was gradually being pulled off. Instead, I am left with a deep feeling of regret, embarrassment, and worry – more of that in a moment.

The paper itself, as I had predicted, didn’t go as well as Wednesday’s Chemistry exam, and I was left to guess the odd one or two questions. One mistake I realised when I came back and checked my answers was the question on velocity and time. Given a velocity/time graph, we had to multiply the two values together to get the distance travelled. On checking through the paper at the end, I realised I’d wrongly multiplied the two numbers, so appropriately amended my answer. 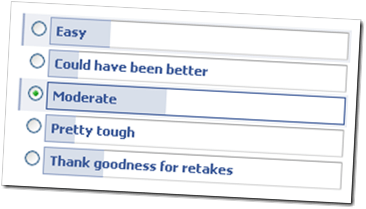 My latest Facebook opinion poll is showing a lead for the middle ‘Moderate’ response.

I’d managed to notice a few examiners’ tricks and – by using a highlighter – I made sure I didn’t fall into them. But this is where I made my critical mistake. The instructions on the front cover state that the candidate must “use black ink or black ball-point pen”. At the end of the exam, when the invigilator came to collect my paper, she was surprised to notice my luminous pink highlighter on my desk. “You didn’t use it did you?” she asked. Surprised, I replied, “Well, only to highlight bits of the question.” Her face turned to panic, as she quickly made a rushed call on her radio to the chief invigilator in another exam hall. Within 45 seconds, she’d run from one side of the entire site to the side we were on, and her face was also of shock. It’s easy to see where the confusion originated; in the Drama exam, we were explicitly encouraged by our teacher to circle bits of the question. The difference with this exam is that rather than answering in a separate booklet, you answer directly below the question.

As it dawned on me the extent of this ‘small slip-up’, I realised the implications it may have. Should AQA choose to fail my entire paper, not only would I have to re-sit it (which would be bad enough), but I’d have to do it at a time that was already saturated with other exams. And it gets worse. I’ve used a highlighter pen in all three ‘Additional Science’ papers – Biology, Chemistry, and of course this one. A forced retake for the Chemistry would jeopardise the warm feeling I got after that exam.

I’m left with this horrific problem – one of not knowing what will happen. On the one hand, it’s just a bit of colour. Maybe it will even bring a bit of joy to my examiner’s late-night marking? I mean, it’s not like I answered in blue ink – my answers themselves were written in complete abidance with the rules. On the other hand, examining bodies are well-known for being peculiar with such things.

So, as I said, on the first afternoon in a long while that I’m allowed to be feeling a little free, I am in fact biting my nails. And the worst of it is that I’ll have to carry on gnawing them for an agonising few months to come.