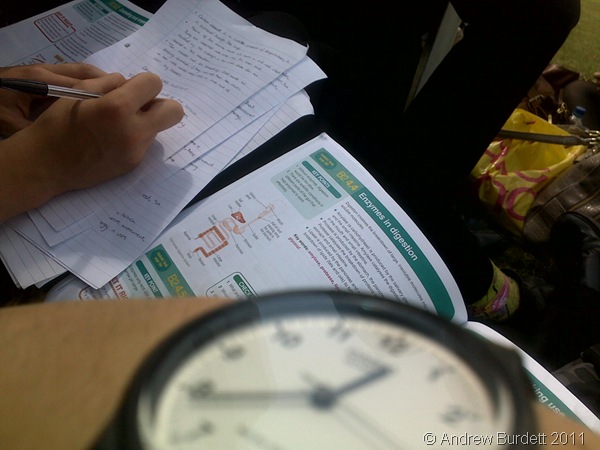 It’s been an abnormally quiet week, has the one just past. The sole reason for this is the exam season of which I’m in the middle of, so all of my other extra-curricular activities (aside from my music instrumental lessons) have been pushed aside as a result. This has meant that there hasn’t really been any opportunity to get the cameras out this week. I faced a real dilemma. Maybe I could run a photo from the Windsor Tattoo last week? Then, I realised, that goes against the name of this feature. (The imagery recorded there was too late for last week’s post, but too early for this week’s.) So after a good think, and a look back at the few photos I did take this week on my phone, I decided to run a photo that appropriately sums up the week – a last-minute peek at revision notes on the field, ahead of last Thursday’s exam.

(Despite appearances, I went into my Biology exam feeling prepared. However, as Thursday’s post stated, the first question’s wording "threw me" leaving me fluffing up the rest of the paper.)