As a special treat, Mum purchased tickets for us to attend the Royal Windsor Horse Show and Tattoo today (Sunday, 15 May 2011). However, with revision occupying most of my day (and church and a drama class at Norden Farm to squeeze in as well), we opted to go solely for the Tattoo this evening. In this blog, I share some of the photos and videos I took at the event.

By the time we arrived, many of the stalls were beginning to pack up. It was the last day of the five-day event, and exhibitors were going home. We were surprised – perhaps wrongly – by the number of tweed-selling tents that were still there; I even tried a shooting jacket for size, but its hefty price-tag meant it wasn’t for me! 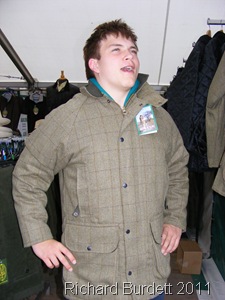 THE WRONG TROUSERS_Just a sample of the luxury clothing available to buy.

Soon, the doors were opened for the main arena and we took our seats. They were OK, but had obstructed views of the action (and giant LED displays) due to a lighting rig in our line-of-sight. Thankfully, as the first marching band entered the arena, there were some seats that were not taken. We therefore slid across, giving ourselves a better view of the proceedings.

The sights and sounds were fantastic: there were about 150 musicians, countless horses, and some brilliant riders. At one point, the animals and their riders interspersed between each other at such menacing speeds, that I was convinced something was about to go wrong. (Hence the motion blur of the horses in the picture below).

I raised a smile on seeing a few chaps running to dismantle and collect the marching bands’ conductor’s plinth, as seen in the below clip: a carefully rehearsed and well-executed manoeuvre.

TEAMWORK_A team help each other out at the Tattoo.

Other bits I enjoyed included the field-gun competition, an amazing (yet slightly terrifying) shooting of the cannons, and a great live demonstration of anti-rebel combat fighting. This began with a mock news broadcast appearing on the large video screen, which interrupted Christopher Biggins (who presented the Tattoo) as he introduced the next item. Then, Land Rovers containing the masked rebels drove out into the arena. Tanks containing British and French soldiers followed, before a flurry of fighting with several hundred blanks fired. Needless to say, the plucky Brits and their new cousins in warfare won.

RUN FOR IT, LADS!_The army run at the defenceless soldiers.

This final clip, above, appears to show a petrified soldier running from the horses. It was in my rushes from tonight’s filming, but I missed it off my radar when editing the footage together. It’s a brilliant clip – it makes you wonder what was going through his head.

The night was rounded off by an excellent fireworks display, set to the backdrop of Windsor Castle, illuminated by night floodlighting.

You can watch the full, edited film from tonight below.

THE TATTOO ON FILM_My ABSstudios-branded film from this evening.
Advertisement