This weekend, my Duke of Edinburgh Bronze Award group canoed down a stretch of the Thames, on our practice expedition. In this blog post, I explain what we got up to.

Our trip began on Saturday morning, loading our kit into dry-bags and then those in turn into the canoes. The minibus towed the boats to Hurley (where we collected another canoe) and then to Wargrave where we began our expedition. 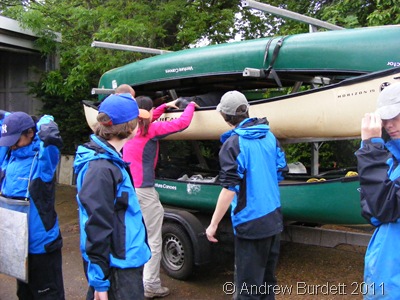 After roughly an hour and a half on the water, we stopped by the riverside at Hurley and had our packed lunches. With the fuel our boats needed in our bellies, we were soon paddling again. 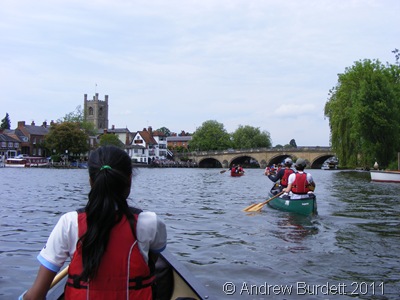 At 5:00pm, we canoed into Hurley where we pulled the boats out of the water and put them away in the RBWM Outdoor Education Project (OEP) sheds. Then, we walked with our bags to the campsite. Unusually for a DofE group, our base camp wasn’t on the island, but the Hurley Riverside Park. This meant a fair trek (led by our adult leaders) to the bridge across the stream surrounding the site, only to find the bridge no longer existed. One leader (Helen) went one way, the other (Nick) went the other, but neither found a crossing. In the end, Nick simply stood in the middle of the boggy stream, and carried our bags across. The rest of us (now relieved of our heavy bags) were able to walk the other way, a  much longer route. 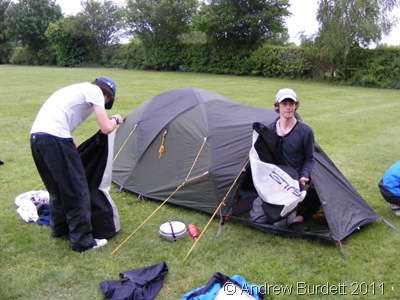 That evening, we pitched our tents, cooked our dinners on the Trangias, and headed off to bed – enabling me especially to get a decent night’s sleep ahead of Sunday’s paddling.

Sunday morning saw us enjoying some of the sausages Jake had pre-cooked (the ‘no-meat’ rule mentioned in Friday’s film applied only to raw meat) and then sealing our gear back into the dry-bags. Leaving the campsite revealed that Helen had missed the bridge the night before by a mere few metres. Despite our newfound knowledge of the shortcut, we were still an hour late to get going on the water.

ON BOARD FOOTAGE FROM THE CANOE REAR-CAMERA.

We passed under Marlow Bridge, into areas I knew well from time spent at Longridge. I was shocked by the number of Borlase rowers – I knew there was an active rowing movement at the Marlow grammar school, but had underestimated its scale. Sharing the river, a group of kayakers were flying down the Thames in perfect synchronisation. By chance, Nick knew one of them and called his name. “Stevie B,” he yelled. It was Steve Backshall, friend of Nick’s and presenter of CBBC show Deadly 60. Children dragon-boating with Longridge looked on in jealousy as he paddled over to speak to us, ignoring their cries of “Steve”!

ON BOARD FOOTAGE FROM THE CANOE REAR-CAMERA.

Following our brief brush with fame, we left Marlow through its lock and continued. Passing under Cookham road bridge I became immediately familiar with the area, thanks to a boat party we held for my sister and mother in 2009. 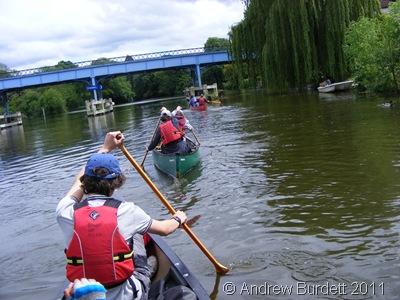 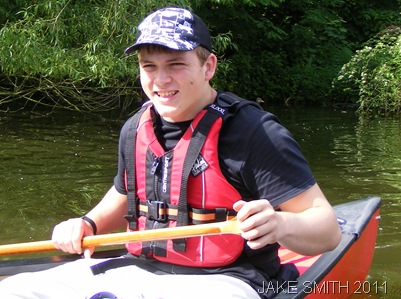 I could even see Cliveden behind us, signalling the beginning of the end of our journey. Boulter’s Lock was just around the corner! 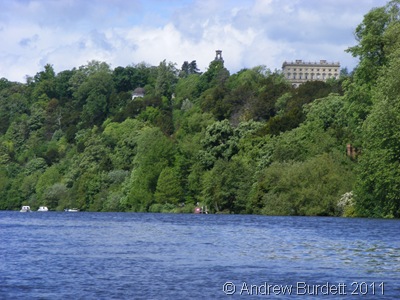 At Maidenhead Bridge, we held onto each others’ boats, creating one big ‘raft’ allowing us to finish at Guards Club Parade together, at the end of a great weekend. 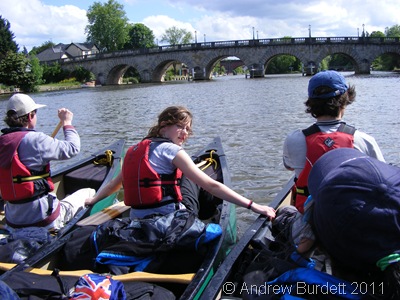