Regular readers will know how I took up editorship of my church magazine, InSpire, in November 2010. After producing the Winter 2010/11 edition at Christmas, I decided that it was time to do another one and today, the first two copies were printed (one went to vicar-to-be Sally Lynch, who was in Maidenhead today). [The post continues…]

AND HERE IT IS…_The first copy comes off the photocopier.

I’m really pleased with this summer’s edition. We’ve got two foreign reports (one from my trip to the Sagrada Familia, another from a couple of ex-St Luke’s congregation-members who now live in New Zealand). There’s updates from the Reordering Committee and the Thursday Group; photos from the Post-Christmas Youth Church party and the Good Friday Activity Morning; and a piece I wrote about my walk “with the Crinklies”. I’m also delighted to include an open-letter by future vicar Sally Lynch, and another guest-written article, this time on ‘St Luke’s Forgotten Admiral’.

All in all, a fairly packed edition. The only two complaints I can see being made are these: first, the price. We’ve bumped it up from a cheap £1.20 to a ‘modest’ £2. Annoying, but fair, I feel. Also, my name. It appears a total of sixteen times within the publication thanks to various articles and photographs I’ve contributed, in edition to the editorial bits.

But, as I say, I think this one is better than Christmas’ one, with a more diverse range of content and more photography. I won’t be at church on Sunday morning when the first copies are bought – instead I’m canoeing on the Thames, in a practice for my bronze DofE expedition – but I look forward to hearing people’s reactions the week after, having had time to mull over it.

It’s not available anywhere else on the internet yet, or even on paper, but you can read this summer’s edition of InSpire in its entirety by clicking below. 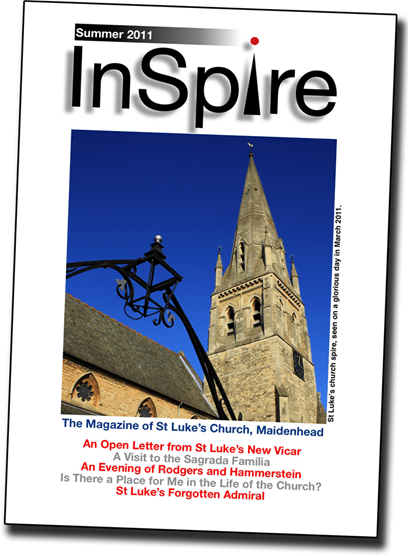