Having seen pictures on the television of Royal Wedding fans camping in London’s West End, I decided to give it a go myself, so headed for Westminster on Thursday night. 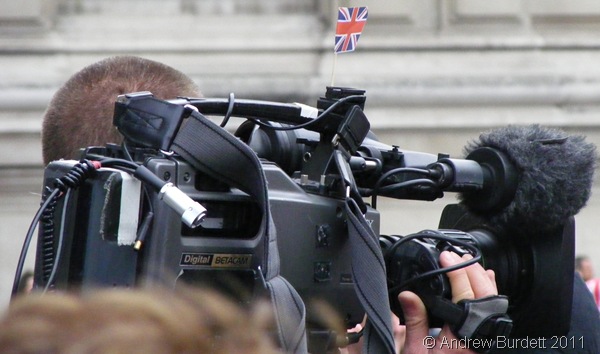 With the long-anticipated wedding of Prince William and Catherine “Kate” Middleton just days away, I’d be toying between going on Thursday night and sleeping rough, or waking early on Friday morning and catching the first train to Paddington. In the end, I decided to go on the day of the wedding, so headed off to Explorers on Thursday night. But at the last minute, I changed my mind. I decided that, if I want to see anything, going that night was my only option. Matthew (my brother) and a couple from church were catching the 9:48pm train, so at 9:03pm I raced back from Cookham on my bike; packed my cameras, a sleeping bag, and a couple of bags of sweets; and was driven to Maidenhead Station.

We travelled on the Tube to Westminster Station, where our plan had been to walk along the route until we found a little cosy spot – preferably with a good view, and not too crowded. Of course, in practice we knew this wasn’t going to happen. But then, almost directly opposite the door to Westminster Abbey, we saw a place that fitted the bill. We’d found our spot for the night.

Matthew and I – keen to see the enormous media operation – went for an evening stroll, tracing the route to the Mall. For me, that was my favourite bit of the entire time: there was so much excited anticipation from the crowds (camping three-deep at some points along the road), with D-list news reporters being mobbed by jolly revellers and cameramen trying to get a glimpse of the atmosphere. But for that part, you really had to be there to experience it. 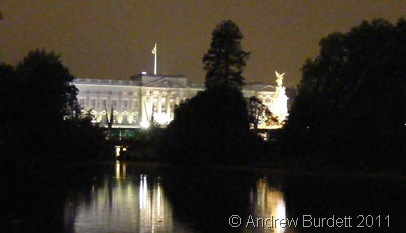 The big day, so long-anticipated, had finally arrived. The date: 29 April 2011. The time: 11:00am. Two billion pairs of eyes across the world turned to London, to watch the day’s events unfold.

For us in the crowds, lining the streets of Westminster, it meant an early start. Tents and sleeping bags had to be put away by 7:00am, but in reality this happened much sooner. We woke up at 5:30am, and shortly after that Mum and Dad came and joined us. There was still much waiting to go, but time passed quickly. It now seemed like thrice as many TV cameras were out and about – though I did resist the temptation to congratulate Andrew Marr on not being a father-of-four.

It was great to have Twitter open on my phone: I could see tweets as the cars drove to Westminster Abbey, and Phil Bray kindly communicated what went on inside the church to me, as he watched his TV back home in Maidenhead.

Sadly, views of the guests entering the building were distorted by a camera jib (in fact, many chose to enter via a side-entrance), but with the aid of periscopes provided by TV channel Blighty we saw the Queen enter, and caught a glimpse of Kate Middleton’s 2.7m train.

“Well that’s it. Next time we here on the streets of Westminster see them, Catherine and Will will be married.”

Some punters then chose to leave the area and walk to the Mall, but I’m glad we stuck around. Not only did we get to see the happy couple leaving the church, but we were also able to get to be in the crowds in front of Buckingham Palace. 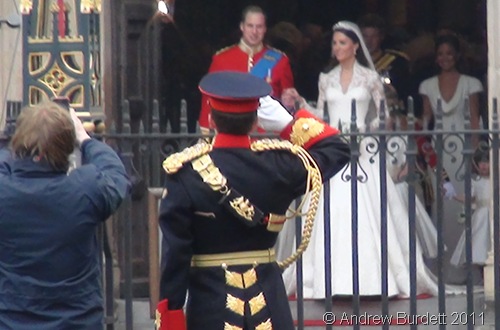 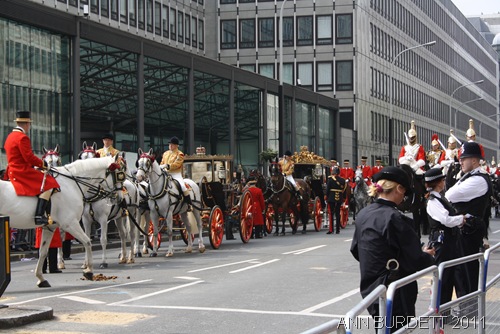 We then followed the crowds to Buckingham Palace. It was – and I speak no word of exaggeration –heaving. At one point, I was seriously questioning whether we’d make it to the forecourt in time for ‘the balcony scene’. Although we did all crush through Buckingham Gate by 1:25pm, Mum (having discarded her periscope) struggled to see over heads. That said, we all witnessed the flypast, as the ex-WWII planes roared up the Queen’s driveway. 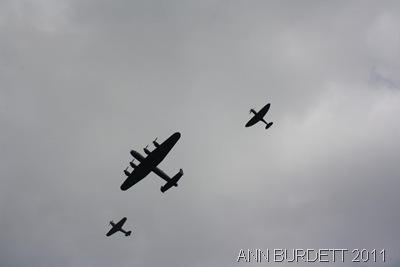 Our day was rounded off by a picnic at Hyde Park Corner, before walking back to Paddington, where I picked up a warm copy of the Evening Standard featuring a large picture of the happy couple emerging from Westminster Abbey.

People will have their own recollections of that day. Mine is the unique way I slept on Thursday night (which I hope I’ll never have to do again). My friend Phil Bray blogged about how he celebrated the royal wedding at home, with excellent photography. In modern-day times, do a search on Google and you’ll find 27,509 news articles about it. What I hope I’ve given here is my experience of the day.

The last word goes to American blogger Linda Holmes. She, like me, was also sleeping rough and watching from behind the barriers. She writes:

“Everyone had fun, everyone saw the Queen (or saw the backs of a lot of other people who saw the Queen), and everyone, from where I was standing, left in one piece in spite of the crowds.”

Below is a video I made of our trip. The shots in it – if you’re looking for amazing footage of the day – is terrible. But it’s not intended to be BBC-rivalling stuff. Instead, it shows my royal wedding experience.

FILM_The video I made of the trip.