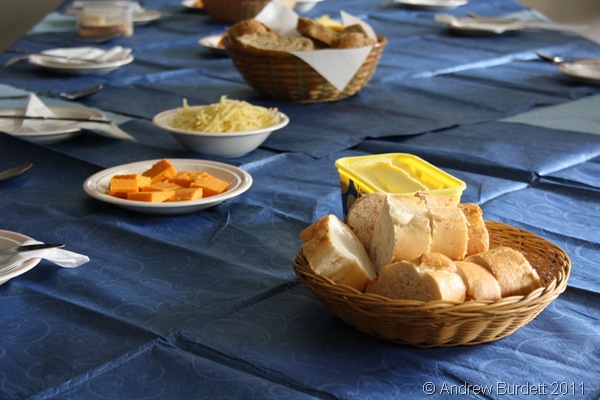 I’ve had trouble choosing a photo this week. It’s not that I haven’t done anything – on the contrary, I’ve sung in two concerts; done huge amounts of work (including an entire piece of English coursework, a performance in Drama, and made beginnings on Music and German pieces); visited Maidenhead Fire Station with the Cubs; welcomed by Dad home from the USA and my brother home from Edinburgh; and visited Legoland Windsor. The thing is though, none of these things are particularly photogenic – though I did take a blurry shot on Wednesday evening of Maidenhead Mosque and some birds in front of it. Photographically, though, it did not make the cut.

This photo, which was taken at lunchtime today, shows just some of the spread laid on for today’s Lent Lunch at St Luke’s. The idea of our Lent Lunches is that attendees bring and share food, and then make a donation (of similar value to that that one would have spent on a normal Sunday lunch) to the church’s chosen good cause: this year the Japan disaster recovery fund.