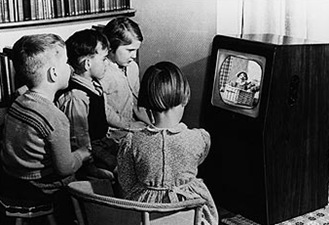 Television today is a world apart from the TV of yesteryear. While programmes like Blue Peter, Coronation Street, and Panorama have all celebrated 50 years on the airwaves in the last decade, the way in which we watch them has changed dramatically. 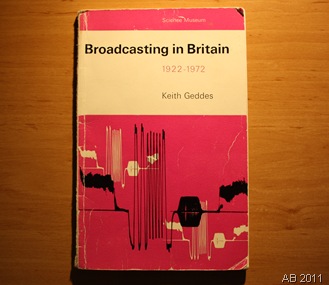 At home, I have a book that my Dad gave me. Written by Keith Geddes and published by the Science Museum, Broadcasting in Britain tells the story of radio-wave transmissions from 1922 to 1972. It concludes with its predictions for the future of TV:

The other innovation is the development of various ‘video cassette’ systems which enable the viewer to reproduce recorded television programmes on a normal receiver. In some systems, the programme material must be bought or hired ready recorded, but others are essentially domestic videotape recorders, permitting the viewer to record programmes ‘off the air’ or even to produce his own material from a television camera. It remains to be seen whether any of these systems will become cheap enough for widespread use.

The first all-in-one ‘camcorder’ (camera and recorder) came ten years later, in 1982, with the release of Sony’s Betacam system. Since then, satellite television has become a reality, high-definition broadcasts are becoming the norm, and production is rapidly moving to an entirely tapeless environment.

In fact, for the first time ever, the exhibiters at this year’s Consumer Electronics Show (CES) were not offering a single new tape-based camcorder and almost all were HD. This Christmas, I got a new Handycam. It’s extraordinarily light and portable, but it’s certainly not hollow; inside it boasts a 120gb hard drive, Exmor technology, and an SD card slot.

Going back to video cassettes, first introduced at the CES in 1977 (just five years after the book’s publication), most people now only have a few still knocking around. Worldwide, we’ve collectively upgraded our cine-film to VHS, our VHS to DVD, and more recently our DVDs to digital computer files. Who knows what the next format will be?

Monday’s visit to London’s O2 jogged my memory. Emerging from the British Music Experience I saw a booth plastered in Sky News HD branding. It was exactly what I first thought – a free opportunity to read the day’s news in a mock-up TV studio. Both Jake and I had our own independent turn, before being given a slip of card. On it, a web address and unique code, so we could both download our efforts straight off the internet. But this was not the first time I’d read the news.

Way back in 2000 as a three year old boy, I sat on my mother’s lap as she did the same (for the same news channel) at the then Millennium Dome where Sky was the official broadcast sponsor. With the internet still new, rare and powered by clunky old dial-up connections, downloading a video file was unheard of (or at least in a quality good enough to suss out what it was meant to be showing). A VHS tape was the answer; I can’t imagine how many of the chunky things they got through a day. 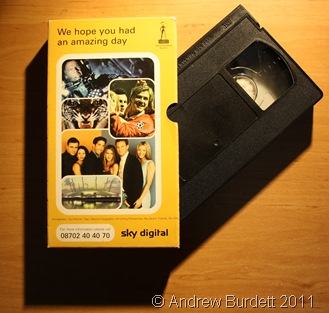 By digging deep into our archives, we found all four of the two-minute tapes. One of the ones my then seven-year-old big sister recorded didn’t survive as well (the soundtrack makes for dreadful viewing), but fortunately the others are still playable.

What next for television?

I think as broadband speeds get quicker and quicker with the advent of fibre, more and more people will be using IPTV services such as the BBC iPlayer. However, I also believe the armchair revolution will force more and more broadcasters to seriously invest in on-demand TV on TV. When watching anything longer than half an hour, people don’t want to sit on an office chair watching a small PC screen – they want it up on their much larger purpose-built television.

When the long-awaited YouView (Project Canvas) finally launches, it’ll create a single, universal platform to access such content. But it’ll be born into a world of rivals, with stiff competition from both Apple TV and the tremendous Google TV.

As far as 3D goes, I’m still not convinced. It seems to me to still be a gimmick. I don’t doubt for a moment that over the next couple of years it will become more and more widely-used (I read somewhere recently that 90 million 3D TV sets are expected to have been sold by 2014). The problem is that because it is such a step-up, broadcasters are understandably nervous about investing. It’s a chicken-and-egg situation: there’s little 3D content at the moment because there’s few audiences that can enjoy it, and there’s few audiences who can enjoy it at the moment because they don’t think it’s worthwhile splashing out on expensive equipment for such little 3D content. 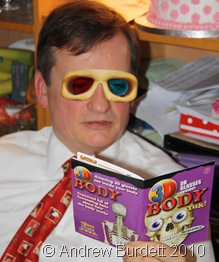 There’s also the glasses issue. Those weird and painful red and blue filtered, early ‘3D’ glasses that made your nose sore are long gone from cinemas, replaced with the much more trendy RealD specs. It still doesn’t feel natural though, enter the Nintendo 3DS (due for release in Europe at the end of March). It’ll be the first true 3D “fully immersive gaming experience”, and there’s no need for glasses either thanks to some clever technology. The reason that it can’t be upscaled for living-room TV sizes is because there’s only a very limited viewing angle at which the 3D effect works. Maybe there’ll be advances in technology and available content as the year goes on, but I personally wouldn’t get a 3D telly of any kind just yet.

If you look at the changes in television in the last twenty years alone, it’s electrifying to imagine what may come in the next score years.