As you may have seen last week, I’m intending to post a photograph every Sunday, taken during the previous week. I happily put my hands up and acknowledge that I am not an ‘ace photographer’, and if anything these posts are more for my own benefit than anything else. Not every photograph I share will be visually beautiful or artistically crafted, and those that aren’t will usually have been selected because they show a particular scene or event that I enjoyed – perhaps knocking my memory and bringing back mental images. 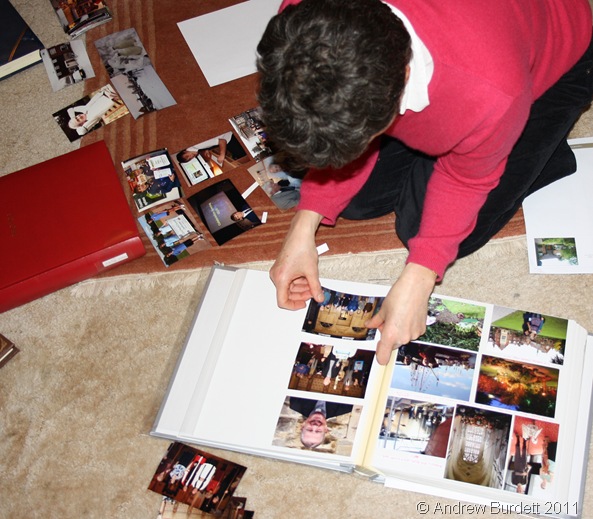 This week’s photo shows my mother doing her usual half-term hobby, maintaining the family photo albums. Ever since she returned from the honeymoon and stuck a few photos taken during the week in a book, she’s been faithfully maintaining a ‘family’ photo album and one each for us three children. They’ve proved to be an invaluable resource when hunting for archive photographs (and indeed, I used them to find pictures of Granddad when I posted on the evening following his death).

Look carefully in the above picture and you’ll see photos of a War Horse puppeteer, Harriet settling in to Cambridge, Richard Holroyd leaving St Luke’s (and then being inducted in Bristol), a church trip to the Whitechapel Bell Foundry, me bagbacking and doing a ‘fund-run’ for Jamboree funds, and editing InSpire (my church’s magazine).

Although by the summer of 2009 we’d finally moved to an entirely digital photographic system, Mum still devotes hours on end to keep up the tremendous record of our lives that are the albums.