This week sees the start of a new feature on my blog, called ‘Photo of the Week’. Now make no mistake about it, I’m no David Hockney or Paul Bunyard (a great photographer who tweets @wildaboutimages). However, mainly for my own purposes, I am posting my favourite photo of the week in a Guardian Eyewitness-style post. 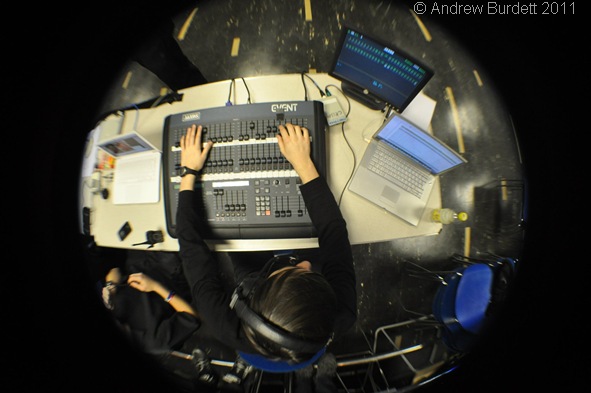 This week’s featured photo (week commencing 14 February 2011) was taken backstage, at the recent production of Alice at my school. Although I was tied up with the lighting desk during the actual performance, I managed to get this photo of the show’s lighting designer, Tom Sims, as he finalised the cues for Thursday’s show.

Taken on my friend Adam’s very nice Nikon DSLR with a fish-eye lens, it’s the first photo I’ve ever taken with such a rare and quirky piece of kit, and I’m pleased with the equally rare and quirky resulting photograph.