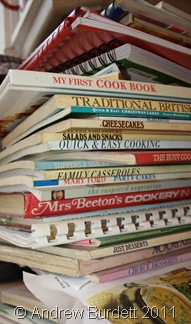 Whilst the title does not sound particularly riveting, I promise you that this post is worthy of a quick scroll through. This year, we’re intending to have a massive clear-out: to go through and sort out the things that we do still need and use, and throw away the things we do not. As part of that operation, it’s anticipated that I will make a move out of the small bedroom that I’ve lived in for the first fourteen years of my life, and relocate into my brother’s room which has more space (making it better suited for studying for my GCSEs and A-Levels). The idea isn’t confirmed yet; the politics of the next few weeks will dictate whether I get to go ahead with the idea.

Until then, we’ve made a small start, going through the scores of cookery books and recipe cards that we’ve accumulated over the last 30 years. Many of them we do not use – we know how to make cakes, casseroles, and creamy desserts – but there are just a few that are still in circulation.

My favourite of all of the books we’ve trashed has to be Bran New Ideas. The copyright notice reads ‘© Kellogg Company 1985’, and the pictures throughout reflect its age. It is, as the name’s pun suggests, a cookery book featuring 50 ways in which to include Bran Flakes in day-to-day cooking. I’ve reproduced a recipe from within, for beef burgers with All-Bran inside. Bon appétit! 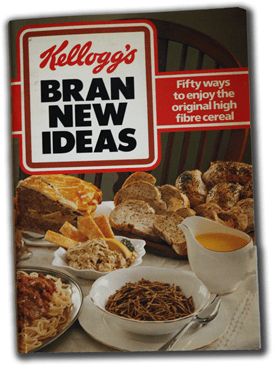 Combine All-Bran, egg, milk and pepper. Mix well. Leave to stand for 5 minutes. Add minced beef, leaving until combined. Leave for 5 minutes and divide into 6 pieces. Shape and grill, or fry until cooked. 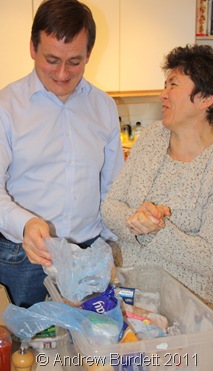 Dad also cleared out the freezer. Among other geriatric foodstuffs, he found prawns from January (but not 2011) which were thankfully disposed of, despite objection from Mum. 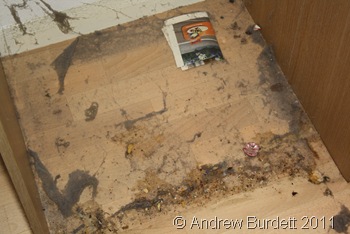 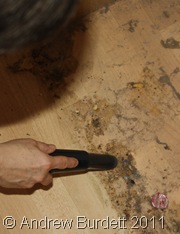 I was most pleased to see the area where the fridge is usually stored being cleaned. It was revolting, with vast amounts of dirt, grime, and the occasional mislaid milk bottle cap – but it’s all cleared now… goodness knows how long it will be until it is cleaned again, though.

Overall, I think we’ve made a good start, but we know that the hard work hasn’t even begun yet. I see some long, tiring weekends on the horizon…