Tonight sees the welcome return of Top Gear, now in its sixteenth series. This run has been delayed – it usually broadcasts in the run up to Christmas – due to HarperCollins (the book publishers) fight with the BBC over Ben Collins’ successful attempt to write a book revealing his identity as the Stig.

After much doubt over whether a new Stig would be introduced (and a hilarious spoof clip of a ‘Stig Farm’ on Top Gear’s site), a photo released on the show’s blog a few days ago appears to show the comedian John Bishop out on the TG test track with a masked, Stig-like figure in the passenger seat.

Between a couple of great Christmas specials (specifically the tremendous Middle-East road-trip), we’ve seen a couple of exciting trailers for the new series – I’m looking forward to seeing a helicopter land on a helipad… on top of a 4×4.

Today, James May drives the Arial Atom V8, Jeremy Clarkson discusses the Skoda Yeti, and Richard Hammond sets out to prove that the Porsche 911 is not just an old VW Beetle with a spoiler on it. It should be good! 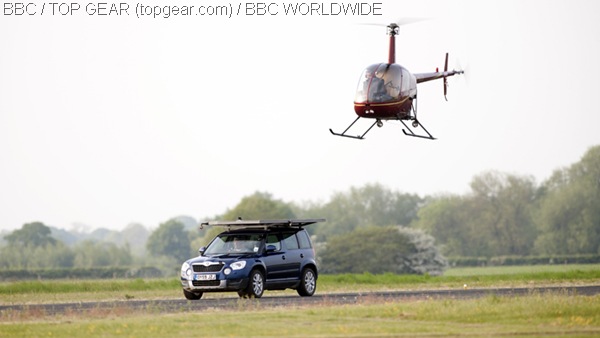 Episode one of the sixteenth series of Top Gear premiers in the UK tonight, at 8:00pm on BBC2.