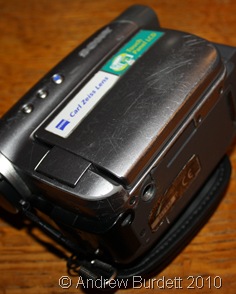 This year, Father Christmas has been very kind to me, buying me a new camcorder. After exactly three years of loyal service, getting through more than 100 MiniDV tapes, my trusty Sony DCR-HC27 is being retired from day to day usage.

It’s battered and abused; it’s travelled several thousand miles; it’s seen awesome sights through its Carl Zeiss lens; and it’s been in my hands for more time than 210,000 UK children have been alive. Now, the time has come for it to get a rest.

Truth is, I still need the old camera – and, in some ways, it’s more precious to me than the new one. Because MiniDV is a dead format (none of the big tech manufacturers make camcorders that use it anymore), my archive of hundreds of tapes will be useless. That may not sound important – after all, the very best possible films have been edited and digitised – but there is no other record of Frowie’s (my paternal grandfather, who died in 2006) voice. There were too few clips of when my brother’s girlfriend at the time was Maidenhead Carnival Queen to bother attempting an edited production – but they are still a great record of both local and family history. My point is that these are locked away in a cupboard in the corner of my room, and in 20 years when I want to have a quick trip down Memory Lane, I will be unable to do so without a device capable of playing back a MiniDV tape. That’s why I am putting the old camera away carefully, and not leaving it to rot or get lost in my metaphorical gadget graveyard, so that it will work when I need to tap into the archive.

Meanwhile, I’ve been getting to grips with my new Handycam. I’m really pleased with it – despite being small and lightweight, it’s got the ability to record in 1080 HD on its 120gb built-in hard drive.