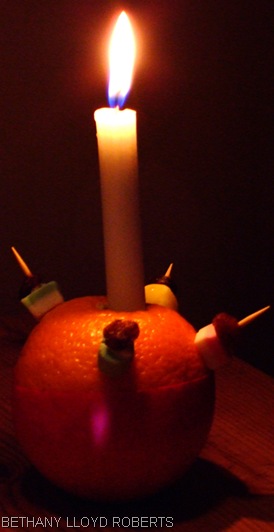 At St Luke’s Church, Maidenhead, Christmas is close to our hearts. The largest of all of the churches in Maidenhead, St Luke’s always attracts hundreds to its Christmas Eve services. That’s why, a couple of years ago, we took a brave step in putting on two ‘Christingle’ services a year (one for younger children, the other for teenagers and older families) – stopping the previous tradition of alternating between crib services and Christingle services. That plan was the brainchild of former vicar of St Luke’s, Revd Richard Holroyd (who moved to two new parishes in Bristol in the last quarter of 2010). He loved the idea of a Christingle: a single, handheld object, that summarises the reason for the coming of Christ in such a way that everyone – from the youngest child to the oldest grandparent – can understand.

Although he’s moved on, we continue to serve our town’s community in this way so yesterday afternoon, a team of volunteers started the annual massacre of oranges in the name of Christ; first taking an orange, cutting the end off to make a flat base, wrapping red tape around the fruit, piercing it with cocktail sticks with sweets attached, and finally adding a candle (which symbolises the light of the world). 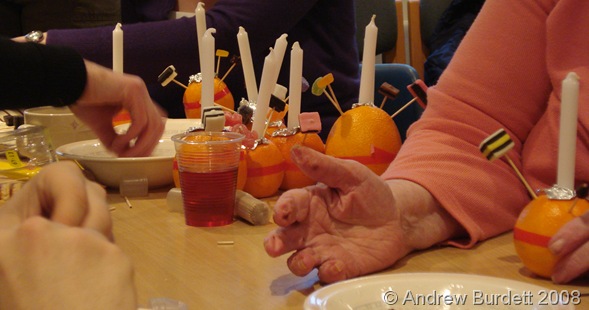 This year’s first service (Christingle I) was, in many ways, extremely similar to 2009 – despite being led by a different member of our ministry team. The biggest criticism I had of today’s younger Christingle service was that the hymns and carols chosen were too traditional: they included ‘Rocking Carol’ which includes the repeating line ‘We will rock you, rock you‘ (though the tune didn’t go quite like the one many of the children were thinking of). Even the bulk of the adults were unaware of the melody, and it was worse for the next carol which even I didn’t know. Don’t get me wrong: I love hearing less-popular and less-familiar carols and Christmas songs at a time where we otherwise hear the same ten all the time covered by countless artists. Indeed, I love ‘O Holy Night’ and ‘Adam Lay Y Bounden’, though I admit that the former is rapidly becoming more and more well-known.

Apart from that, I believe that those in charge of making sure the two services went ahead as they should did a cracking job. The focus was still, very much, on Christmas being a ‘festival of light’, and this was proven when everyone stood around the inside walls of the building, illuminating the church only with the light of each Christingle’s candle.

And so, with just hours left until the big day, it’s time to break out the Sellotape and wrapping paper… and hope I haven’t forgotten anybody!

Have a wonderful, safe, happy Christmas. With love and best wishes,
Andrew x

Postscript: For comical value, I leave you with this video I made a couple of years ago, following the short life of a Christingle. It’s funny not just because of the poor editing quality, but also the pitch of my pre-pubescent voice.