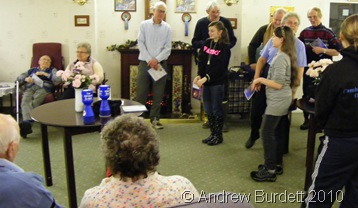 Tonight I joined a small group from church, as we took the Christmas message out around the Parish. We’ve been doing it for many years: piping up verses of popular carols while shaking a tin for The Children’s Society.

We started by visiting Norfolk Road’s Neve House (a short walk from St Luke’s) and did several verses of the residents’ favourites carols. Then we left, to the biting cold and falling snow, as we paraded around the roads and streets that surround church.

This year, we were ‘lucky’ enough to be joined by some guest singers. At first, the group of 9-13 year-old boys were merely mocking us, singing We Wish You a Merry Christmas loudly and very quickly. However, when invited to be part of our group, they had no cheeky response ready – and actually I think they enjoyed themselves. Oh, and then – totally out of the blue – the police (get it? “out of the blue”?) pulled up and had “a little chat” with them.

There were, of course, the usual blend of people who “don’t believe in Christmas” and yet whose houses are covered in illuminated decorations, and people who “have no money” and yet are happily nattering away on their swanky iPhone. But I mustn’t be cynical, and as they slammed the door in my face I wished them a very enjoyable Christmas.

Despite all of this, we raised a fair bit – up on last year’s grand total.