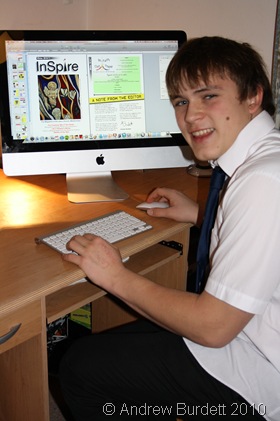 This (or something similar) is the photo that will appear in the Maidenhead Advertiser on Thursday, when they cover the story of me being the youngest editor of our church magazine, InSpire. (Long-serving readers will remember when I discovered that ‘Inspire’ is also the name of an Al-Qaeda online paper.)

Following our vicar’s departure for Bristol, we’ve all had to take on extra roles in the parish. One thing the vicar ran was the church magazine, but now he is gone (and as I have the technology and ability), I agreed to take it over.

It’s unknown if we’ll get enough content to get an issue out by Christmas, but it is at least hoped we will – to catch the passing ‘Christmas traffic’ (people who are not ‘regulars’ but come for the Christmas services.

The photographer came around at 4:00pm and was impressed by our Christmas Lights! He spent about five minutes getting the angle of the screen right (so that it did not reflect), but eventually he got the photo he wanted. Yesterday, I was phoned by the ‘Tiser who then did a phone interview, and asked me what time I was free for a photo.