It’s 19:23 on 4 December 2010, the first Saturday of December – and the busiest day in the retail year. I’m on a cramped train, heading back home to Maidenhead after a great day in my favourite city in the world – London. Tonight, I’m going to tell you what I’ve got up to, and share some of my best photos to date (all of which were taken since this morning).

This year at my church’s youth discussion group (called Sparklers), we’ve been studying Christianity through art. I’m no Brian Sewell, but it’s been a fascinating topic to cover all the same, not least because of the variation in each picture. There’s a hundred-thousand illustrations of Christ’s nativity in the world, but all of them are very different. Depending on the time they were made depends on the clothes of the subjects; depending on the artist depends on the medium; and depending on the country they were created depends on the scenery of the surrounding area.

For a long time, we’ve been planning a trip to the National Gallery in the capital to see the real things. Today was the first time that all of us Sparklers were free, so at 9:30am we met at Maidenhead Station ahead of ‘a day of discovery’.

Once we arrived at Paddington, we changed for a bus. This gave us great views of Marble Arch, Hyde Park, and the early birds at Oxford Street. It was then a short walk to Trafalgar Square, which, remarkably, all three of the other children had never been to. I was amazed. This concept was alien to me. How can someone living 40 miles away (or an hour on the train) have never visited the centrepiece of their own capital city? After pointing out the Fourth Plinth, Nelson’s column, and even the graffiti left from Wednesday’s student protests, we went up the steps of the splendid National Gallery.

Suddenly, as we looked from the top of the steps out over the square, a score of men approached the Christmas Tree (given annually since 1947 as a gift from Norway for our help during the war). They then proceeded to undress, revealing pairs of fluorescent briefs (much to the delight of the young-female leader), and marched around beneath the gallery. It was very funny though, and added an extra smile to our trip. 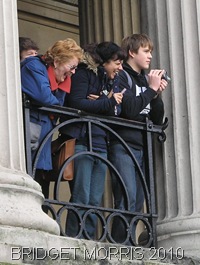 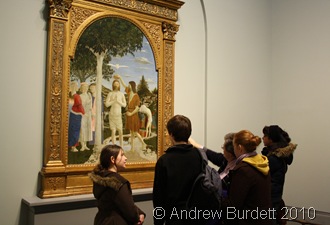 After putting a pound in their charity collection bucket, we entered the magnificent building. Following a quick coffee break in the café, our party moved upstairs and into the gallery itself. There, we saw many of the images that we had studied on A3 printouts, only here they were in their real size. We could examine every crack, see the detail in the shading, and get a sense of scale of each picture. My favourite one (despite not being one that we had previously studied) was Gerrit van Honthorst’s ‘Christ Before the High Priest’. The thought that must have gone into the effect of the candlelight is mind-blowing.

As our visit to the Gallery drew to a close, I started getting ideas for the church’s youth Christmas production, based on the theme ‘Christmas through Art’. I’m planning to use footage from today in a video to be shown at the start of the service, introducing the theme. It was then off to Pizza Express for a late lunch. The place was heaving and we were initially told that there was going to be at least a 25 minute wait before we were even seated – though in reality it was more like five. Although I went for a basic margarita and added ham, the pizza was delicious.

After we’d cleared the bill and sorted out the money, at 16:30 they left for home. I, on the other hand, waved goodbye and let the fun begin. I had decided to take both my still camera and my video camera in order to make a film for the Santa’s Grotto room at our Christmas Lights of Christmas coming to London. With my new-found independence, I rode the London Eye, filmed Piccadilly Circus, and photographed Regent Street and Oxford Street.

At 19:00 I made my way to the tube station, then headed for Paddington. It had been a delightful day, thanks to the Sparklers leaders who made the trip possible, and my parents who allowed me to take myself off with a few hundred-pounds’ worth of cameras.