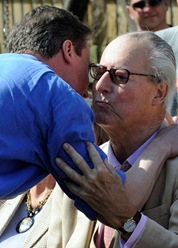 Following the immensely happy news of the birth of Florence Cameron, the Prime Minister has lost his father, Ian. The news was released by Downing Street this evening.

It comes after 18 months of ups and downs for the Camerons. Samantha and David’s first child, Ivan, was profoundly disabled from birth, and died in February 2009. A year later, and Mr Cameron was launching his election campaign which proved successful, when David became Prime Minister in May 2010. While on holiday in Cornwall, the couple’s latest baby was born premature, but absolutely fine. It was just days ago that the latest member of Cameron’s ‘Big Society’ was seen posing with Mum and Dad on the steps of Number 10. Sadly, Florence Rose Endellion Cameron never met her granddad.

“You know the glass with him [my father] was half full.. it was overflowing… normally with something pretty alcoholic in it and this great sense of optimism. I think, I hope, I have got my sense of optimism from him.”

Cameron clearly thought very highly of his father, who was born with his legs foreshortened below the knee and with three toes on one foot and four on the other. Anyone who’s ever lost their dad during middle-age may wonder what all of the fuss is about, but then they’ve never had to deal with the news whilst in office as Prime Minister of the United Kingdom, after losing your son months before.

David received a call from a doctor in France (where Ian and his wife were holidaying), who persuaded the Prime Minister to miss the first PM’s Questions after Parliament came back from its summer break, and he made his way to be with his dying father. He got to the hospital in France just in time (thanks to a helicopter organised by Nicholas Sarkozy), but Ian Cameron died moments later.

No doubt there’ll be large numbers of obituaries in the papers over the coming days, but – from what I’ve read – Mr Cameron seemed a lovely gentleman. And a shot I had never seen before, from a rally during the Tory campaign in April, showed a wonderful moment between father and son.

David Milliband, one man in the running for leadership of the Labour Party, said “My thoughts are with David and his family”, adding he was “very sorry” to hear the news. Former Prime Minister Gordon Brown also expressed his condolences in a letter to Cameron.