For anyone who doesn’t know, this is the time of year that Apple unveil their latest updates to their products at their Apple Keynote presentations. Highly theatrically and engagingly, CEO Steve Jobs will stand in front of hundreds of bloggers, Apple fans, and journalists, and give them the latest. Here, I give you the lowdown on what’s been announced.

Since its release in September 2007, the iPod Touch has been the object of desire for people who couldn’t afford an iPhone, but wanted many of its features for a lower price. While it can’t make voice phone calls, iPhone apps make use of the Bluetooth to utilise the higher-specced model’s headset’s microphone. 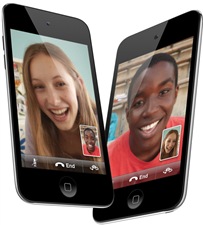 However, the new one has a camera for the first time (two, in fact), which allows it to make use of ‘Facetime’, an iPhone 4 service for video-calling. The new iPod Touch also features HD video recording (just as was unveiled in the latest iPhone), and this is great with the iMovie app that Apple created, based around the Mac alternative to Windows’ Movie Maker.

There’s also a new app called ‘Game Center’, which lets the user play along with both friends, and computer-selected people from across the world over Wi-fi. No doubt this will come to the iPhone in due course.

Just like the iPhone 4, the device features the new ‘Retina Display’, with its incredible 960-by-640 resolution.

The great thing is that all of these updates makes the iPod Touch (which hadn’t changed much since its first incarnation) much more up-to-date with its big brother the iPhone 4. Also, the Apple A4 chip, which was unveiled in the iPad and is also found in the new iPhone, makes the music player far more powerful than any other portable music player.

I think that all of these features warrant the new pricetag (up £40 on the base model from the last iPod Touch). The new iTouch, therefore is priced in the UK as follows: 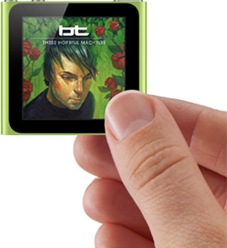 The iPod Touch and the iPhone are the only touch-screen devices that Apple make. But, recently, the Magic Mouse and Magic Trackpad have also incorporated these devices’ ‘Multi-touch’ technology. Now, the iPod Nano comes to join them, though I’m yet to be convinced if this 21.1gram clip-on player, with a 1.54-inch screen, will be anything like as good as Apple’s current touch-interactive range. But then I’m speaking as someone who’s never even had a go with it, so we’ll see.

From as far as I can see, it looses the camera that the last one introduced. Not surprising though, and I fear you’d keep scratching it with fingernails if there was one, due to its size.

It is far more like the old iPod shuffle with an added screen, than a smaller version of the old Nano with a touch-interface.

It is sweet, however, and I do like its innocence. However, I’d rather pay a bit more for the iPod Touch, something you can really have and hold. Maybe that’s just for what I’d use it for, as I think this would continue to be great for runners just as the old Shuffle was. I have a hunch that this reincarnation could be an attempt to kill of the iPod Nano, channelling its market users to the iPod Touch.

The latest edition of the popular music player and online store for video, music, and app downloads. The free update for PC and Mac users features ‘Ping’, Apple’s attempt at a social network for music. They say that it’s not meant to be either Facebook or Twitter, but “something new”. It’s not out just yet, but it says ‘coming soon’. Current iTuners will get a message through Apple Software Update when it’s available to download. 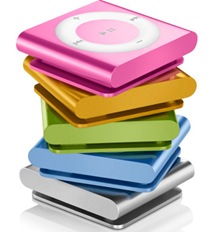 The new iPod Shuffle is effectively just the old iPod Nano with the screen chopped off, and with VoiceOver (telling you what song you’re listening to) added. It retains the clip that the old one introduced, as is also found in the new iPod Nano.

The new Apple TV has a great pricetag, at just £99. It’s black, and just looks great. With YouTube, Flikr, and Apple’s MobileMe available over the internet and displayable on its 10-foot-user-interface, the Apple TV is a great partner for your HD TV if you like storing all of your content digitally and/or online. 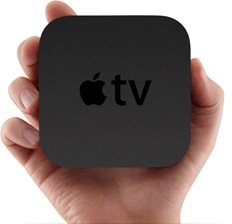 A great line-up of revamped products for the music and digital-content lover. I can’t really see the point of the iPod Nano, but the new iTouch looks very exciting. I know what I’ll be asking for for Christmas! The Apple TV’s price is great, but not something everyone will want. It’s never been anything like as exciting as any of Apple’s other products, and never really caught on due to ‘better’ alternatives (including Sony’s built-in BRAVIA entertainment system). The £99 label, though, may interest more people who would otherwise have never bought one. But a great range, hooray for Apple!