A great organisation that my Mum’s known about for a long time is ‘Kids’ Week’. Every summer, the event (which is now, ironically, a fortnight long) offers free tickets to children to see some of London’s most popular shows, with every full paying adult.

In addition to discounted rates to see many of the West End’s productions, the scheme also offers the chance to interact with the shows.

Last Friday, for instance, I was part of a group of similarly aged children who were shown around one of London’s most traditional theatres – the Old Vic. Not only were we shown the backstage ‘set store’, we also got to tread the boards and make ourselves heard!

After a fascinating tour, there was a workshop where we did some activities based loosely around its current show.

Today, then, and Mum had booked me on another of these ‘experiences’. This time, it took place at the New London theatre (one of my favourites), which opened in 1973, debuted Andrew Lloyd Webber’s ‘Cats’ in 1981, and more recently has also played host to the Blue Man Group. Since March 2009, its permanent show has been the stage version of Michael Morpurgo’s ‘War Horse’. 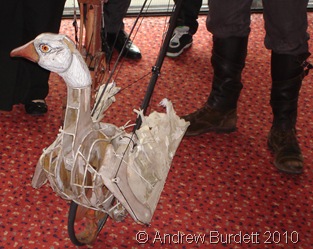 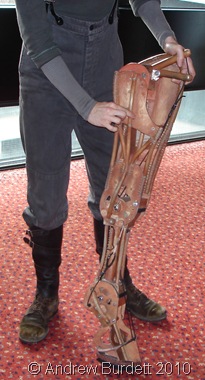 Having been read the book many years ago as a bedtime story, I first saw the West End version last year (through Kids’ Week). Wonderfully, the title character – a horse which is sent off to World War I – is in fact a puppet. But it’s not the only puppet in the show – there’s a small ‘Joey’ horse and a large one, along with several other horses, a couple of birds, and a very life-like goose (which was apparently christened ‘Gilly’ by the director very early on).

Today’s ‘experience’ was a Question and Answer session with one of the most senior puppeteers. With A DEGREE in puppeteering, one can expect that this guy knew what he was talking about!

It was a great opportunity to get those burning questions answered, and then we were given the chance to use one of the controlling mechanisms ourselves.

Thanks to Mum, Kids’ Week, and the theatre, for giving me and Jake the experience.